Howard Finster was a man of ardent evangelical faith and ambitious work habits, with an outgoing personality and a life very difficult to winnow down to a few paragraphs, so here are some basics.

Born in rural Alabama, Reverend Howard Finster was a man of prophetic visions, a rustic Southern Baptist preacher inspired by the Gospel, visitations from the dead, and visions of extraterrestrial life. As a preacher and a “master of 22 trades” he was an improbable candidate to become one of America’s most widely known and prolific self-taught artists. 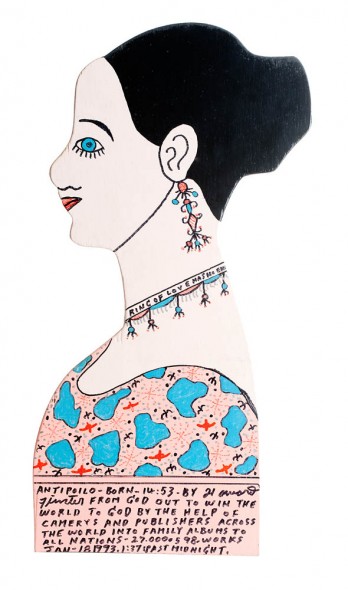 Finster’s career as a folk artist started late in his life with a divine vision. In 1976 at the age of 60, he saw the face of God in a paint smudge made by his index finger while fixing a bicycle in his workshop. In that vision, the Lord instructed him to make five thousand works of sacred art. Following his self-described vision, Finster began painting. He saw beauty beyond the obvious. His candy-colored painted works and subjects were typically executed on jigsaw-cut flat wooden figures ranging from Elvis, automobiles, and Hank Williams to angels and Coca-Cola bottles and adorned with messages and Bible scriptures, in a manner that pairs religious symbolism and pop-culture iconography.

He devised an intricate numbering system and time-stamped many of his works upon completion. Occasionally he signed his paintings “BY HOWARD FINSTER, OF GOD. MAN OF VISIONS.” He reached the ordained quota of 5,000 just before Christmas 1985. By the time Finster passed over in 2001, his catalogue numbered more than 46,000 works of folk art, and, much to his credit, in his lifetime the works made their way into major art institutions and private collections.

Note of Interest:
The night before my submission deadline, in conversation with a local art enthusiast and close acquaintance of Howard Finster, I discovered that Howard had hanging in his home a print of the well-known fifteenth-century Italian Portrait of a Woman by Antonio Pollaiuolo. The original painting is in the collection of New York City’s Metropolitan Museum of Fine Art. In the case of this painting, Howard was obviously inspired by the work of Pollaiuolo.

Linda Dyer serves as an appraiser, broker, and consultant in the field of antiques and fine art. She has appeared on the PBS production Antiques Roadshow since season one, which aired in 1997, as an appraiser of Tribal Arts.

If you would like Linda to appraise one of your antiques, please send a clear, detailed image to antiques@nashvillearts.com. Or send photo to Antiques, Nashville Arts Magazine, 644 West Iris Dr., Nashville, TN 37204.