Stars Opening for the Stars’

The Nashville Opera has recruited three nationally known performers to sing popular opera and Broadway songs at Vanderbilt’s Dyer Observatory on June 15. Once the performances are over and the sun has fully set, audience members can go up to the observatory to peer at the stars, both through a telescope and with the naked eye. “We’re opening for the heavenly show,” Nashville Opera executive and artistic director John Hoomes says with a laugh.

Opera on the Mountain is one of several events designed to expose opera to new fans. Two other non-traditional “Opera @” events are in the planning stages: Beer and Baritones, coming up later this summer, brings performers to a brew pub in East Nashville. Nashville Opera will lead a sing-along showing of the original movie Grease at Franklin Theatre in July, and patrons will be encouraged to show up in their best ’50s attire.

At the Grease event, Nashville Opera staffers also will lead the audience in chants and dancing. “It’s kind of like Rocky Horror Picture Show but more family friendly,” Hoomes says.

Goodness! Have Nashville Opera traditionalists cried foul at such pedestrian fare? “Not yet,” Hoomes said, laughing. “I think opera for too long has had the reputation of being this very stuffy art form that’s behind glass, very sacred, and you shouldn’t touch it,” he said. “And I think that’s wrong. We have to be a living, breathing art form. I think it’s important.” Besides, Hoomes adds, “These will never take the place of our main shows.”

This is the fourth year for Opera on the Mountain, and as far as company officials can see, it’s working. The event always sells out its two hundred or so tickets, and Hoomes is seeing new faces in the audience. “There are a lot of new people or a lot of regulars who bring new people,” he said.

There is some seating under a covered area, and there are tables for others, but most folks bring a picnic and sit on the grass. “It feels a little like an opera tailgate,” Hoomes says. 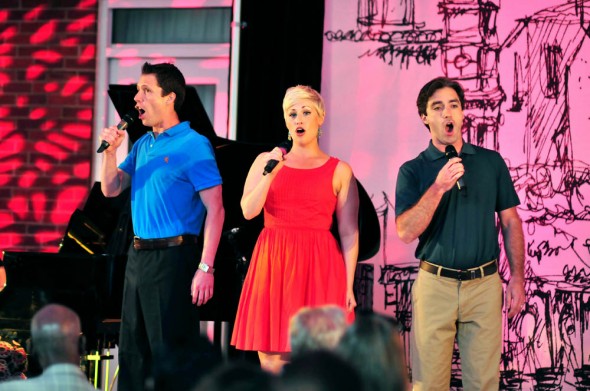 The individual pieces haven’t been selected yet, but Hoomes plans on choosing well-known opera arias and popular pieces from Rodgers and Hammerstein Broadway musicals. “We’re looking for crowd pleasers, a light, entertaining evening of opera’s greatest hits,” he said. “We want to introduce new audiences to opera in a casual type evening.

People know a lot more opera than they think,” he said. “They’ve heard it on commercials or on cartoons. We’re going to do some of these pieces the way they were intended to be heard.”

Opera on the Mountain happens at the Dyer Observatory, 1000 Oman Drive, Brentwood, at 8 p.m. on June 15. Gates open at 6 p.m. Tickets are $55 for table seating, $35 for concert seating, or $65 per carload for grass seating. www.dyer.vanderbilt.edu

Are you looking forward to Opera on the Mountain and Nashville Opera’s other exciting opera events?