Nicole Brandt is a junior at Belmont University and the founder of Poverty & the Arts. She came up with the idea for her program one day two years ago when she was working at her campus job. As a Campus Coordinator at Belmont’s Center of Service Learning, Brandt was responsible for planning three service projects each semester.

“I was brainstorming about projects one day, and all of a sudden I got this idea,” she says. “What would happen if homeless people were suddenly able to paint and play music and write in collaboration with other communities?” Brandt gets excited when describing her breakthrough, but it didn’t exactly come out of the blue. 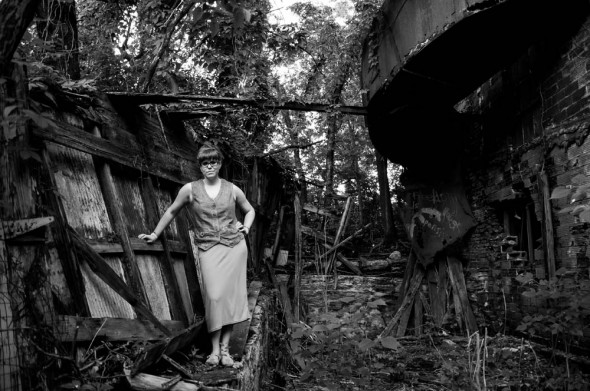 “I started working with the homeless when I was 18 in high school. But instead of working at a soup kitchen, we’d basically just go and visit homeless people and get to know them by talking with them,” says Brandt. “The thing I love about Poverty & the Arts is that we’re creating art together, not just serving them a meal,” she says. “You’re not doing something for them, you’re doing something with them. It levels the playing field when we all just gather as artists.”

Poverty & the Arts brings students, volunteers, and Nashville’s homeless community together to meet on the common ground of art making. Like other programs in the city, Poverty & the Arts provides homeless people with the space, supplies, and guidance to complete creative projects. Most importantly, the program aims to change the perception of the poor and homeless by creating an environment where all the participants can be seen as creative individuals.

P & A’s biannual creative events have partnered with Room in the Inn, Belmont University, and Tennessee State University to facilitate environments where Nashville’s homeless community meets student artists and volunteers on common, creative ground to interact, collaborate, and share in the creativity of making. This is one way that P & A realizes part of its mission to “break down class lines and restore community.” The events are also meant to use creativity as a gateway to empowerment and the recovering of self-esteem and identity.

Since 2011, Poverty & the Arts has done only three events, but Brandt is already branching out, taking the program out of the student/university context and attempting to grow the program in a way that will make it more sustainable. “I want it to last,” she says. “If I leave Nashville it can still be here.” Brandt started the wheels rolling on getting P & A approved for non-profit status last fall but has found the experience to be a real challenge.

“I started having coffee dates with everybody I could think of. I was picking everybody’s brain in the arts community,” says Brandt. Beginning with the basics, she educated herself about the pros and cons of running an arts non-profit, and she hit a snag when she saw the price tags.

“It costs a lot of money. It’s like $100 to get incorporated, and then it costs like $900 to file,” she says. Not easily discouraged, Brandt has planned the first-ever Poverty & the Arts Gala. The fund-raising event is set for June 29. The money will help P & A get their paperwork filed and could assist in expanding the twice-a-year creative meet-ups, which already include opportunities to do visual art, music, and creative writing.

“I’d love to incorporate drama and improv or dance,” says Brandt. “I know that the performing arts could be a powerful means for these people to express themselves.” Something tells me she’ll find a way.

The Poverty & the Arts Gala will be held on June 29 from 6 p.m. to 10 p.m. at Main Street Gallery, 625 Main Street in East Nashville. Visit www.povertyandthearts.org
for more ticketing information and a full schedule of events.