“Esky,” the distinctive mascot of Esquire magazine, first appeared on the cover of the magazine’s second issue in 1934. Esky, a pop-eyed gentleman with a full handlebar mustache, slicked-back hair, and wearing a full-dress tail coat, was seen teetering on his top hat in an attempt to reach the edge of a monumental martini glass. From that issue onward, he was an embodiment of the Esquire attitude: well dressed, waggish, and just urbane enough to overlook his indiscretions.

Esky was the creation of the long-time Esquire cartoonist E. Simms Campbell and appeared in more than five hundred issues of Esquire over the years. While his likeness originated as a cartoon character in the magazine, it then became a display icon to be used in department stores and men’s specialty shops to help guide shoppers to the items that had been featured in the trendsetting magazine.

The display figures vary in size and form, but all have the signature blonde mustache and wide-eyed gaze in common. Most composition Eskys are standing full figurines; some are equipped as sign holders (“You saw it in Esquire”), and fewer are mechanical and equipped to appear as though he was smoking.

This form of the mustachioed man of refinement, standing 24 inches tall and in original paint, would fetch his owner up to $1,200 in a retail setting. Vinyl, plastic, and polyvinyl advertising figures from the ’50s and ’60s, such as “Esky,”Alka-Seltzer’s “Speedy,” and Quaker Oats’ spaceman from the planet Quazy, ”Quisp,” currently dominate the hearts of advertising collectors.

In the late 1940s, a small, Indiana-based advertising agency was tasked with selling the Handy Flame® cartoon character to natural-gas companies around the country. The Handy Flame creator, William H. Rohr Jr., believed that Handy Flame could be the gas industry’s equivalent of Reddy Kilowatt®, the spokesman of the electric utilities in those days. Rohr Jr. copyrighted the Handy Flame name and image in 1946 for the purposes of “ . . . Advertising services to the gas utilities industry—namely, preparation of advertising layouts . . . ” hoping that it would be licensed by the nation’s natural-gas providers as their advertising mascot. 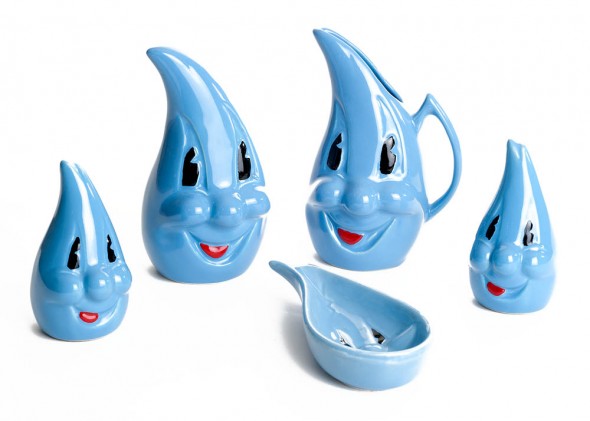 While Reddy Kilowatt, created in 1926 with his lightbulb nose and limbs of lightning bolts, was a prominent promotional representative for electric energy for over six decades, Handy Flame apparently did not have the heat to ignite the interest of the purveyors of the gas industry. Handy Flame appeared to have his greatest success during the mid ’40s to mid ’50s promoting the use of natural gas in the kitchen.

Most of the anthropomorphic-form creamers, sugars, spoon rests, and salt and peppers found on the market today bear the impressed mark “Handy Flame.” As for their achievement as promotional items, the cheerful blue forms appear to have distribution attributions limited to the “Indianapolis Gas Co” and the “Indianapolis Blue Flame Gas Co.”

In a large grouping or just an individual piece, these paint-decorated, low-fired ceramic collectibles are very charming. The owner of these happy-faced Flames has not limited herself to simply one of each. Her particular collection numbers in the hundreds. Should you wish to brighten up your kitchen with Handy Flames, Internet shopping would be your ideal hunting ground. Expect to pay, on average, $100 for a group as shown. The spoon rest will be the most difficult to find and the most expensive. Please always remember that condition is very important: no cracks, chips, paint loss, or repainting.

Linda Dyer serves as an appraiser, broker, and consultant in the field of antiques and fine art. She has appeared on the PBS production Antiques Roadshow since season one, which aired in 1997, as an appraiser for Tribal Arts. If you would like Linda to appraise one of your antiques, please send a clear, detailed image to info@nashvillearts.com. Or send photo to Antiques, Nashville Arts Magazine, 644 West Iris Dr., Nashville, TN 37204.