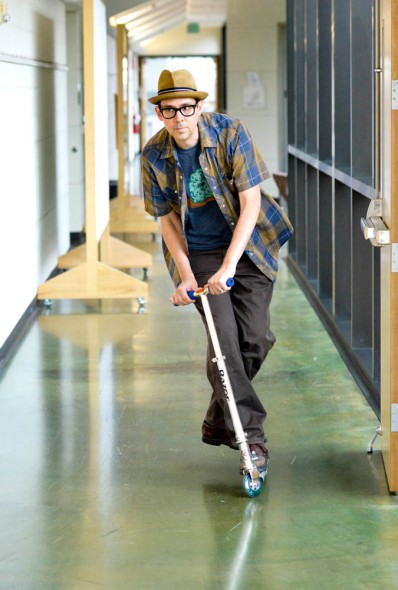 Hang On! There’s been a seismic shift in Mark Hosford’s apocalyptic Disney World. Linda Leaming braced herself for the aftershock.

The artist Mark Hosford grew up on the plains of Kansas where his fertile imagination, instead of roaming freely, turned inward. To look at the dapper, trilby-topped college professor, you’d never suspect inner demons or that anything is amiss. But it most definitely is.

You can’t look away from Hosford’s deeply disturbing yet masterful prints, animations, and drawings. Something is horribly wrong in his overwrought world of children, monsters, weirdly cute animals, and disemboweled things. For Hosford, this is business as usual. I, on the other hand . . .

NA: Your work is playful and visually appealing but dark. Why?
MH: That’s life. Life has that ambiguity. Everything you love has a flip side that can be unsettling. 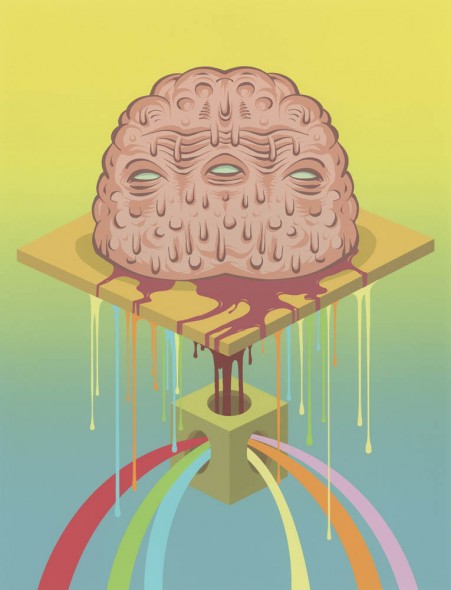 NA: It’s safe to surmise that as a child you had an active imagination. A lot of your work looks like it’s from the viewpoint of the closet in a bedroom. Did you spend time in a closet as a boy?
MH: (laughs) Actually I spent a lot of time in my closet. I was plagued with over imagination. I grew up in a split-level ranch. My bedroom was on the second floor. Huge oak tree branches brushed against my windows at night making shadows that fueled my nightmares, which were vivid. I also watched a lot of horror movies. I’m the youngest of four. When the oldest saw something, I saw it. I was obsessed. I still am.

NA: What do you watch now?
MH: I like movies where an image of a sink dripping is ominous. Years ago Freddy Kruger was an obvious bad guy. Things were less ambiguous. Currently in the genre someone who tortures is in the position of power. That’s confusing and subversive. I can’t watch the Saw movies.

NA: There are a lot of drippy things in your art.
MH: I like drippy things. I cut and fried meat at a deli for four years during college. I’ve been a vegetarian for twenty years. I was fascinated. They want customers to see the food prepared, because they want them to think it’s clean and safe. But three inches from what they can see is a bucket of blood. There’s so much illusion. 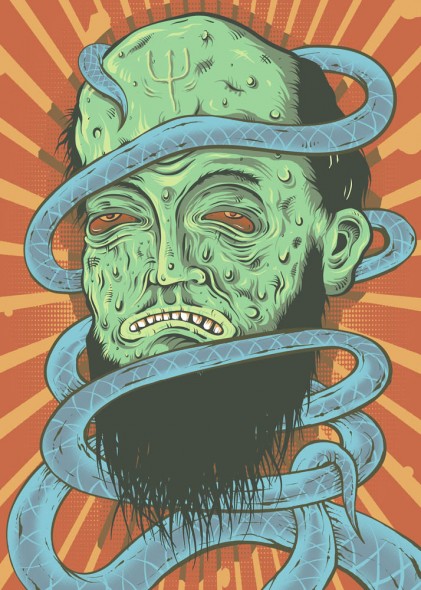 NA: Yikes. That’s disturbing.
MH: I know. I make my work about things I have anxiety about or that I’m uncomfortable about. I mix playfulness with danger and draw myself as a child. I’m a little socio-phobic and introverted.

NA: You’re drawn to disturbing things? So you work out your anxiety with your art?
MH: If I see something disturbing, I can’t get it out of my head. I keep at it, because I want to know what’s going on in the world. I don’t want to be ignorant. I want to shatter illusions. We need to see things and get angry about them so we can fix them. It’s a way to make sense of who I am. I can never remember a time when I wasn’t neurotically drawing.

NA: Your teen years must have been intense.
MH: I was part of the skateboard culture. I was into heavy metal, punk: the Sex Pistols, Dead Kennedys, Gang of Four, the Misfits. When death metal came out, it was the heaviest, deepest thing I ever heard. For someone confused and slightly angry, it was a way to get all that angst out.I was obsessed with how different things in our society that interested me were part of a camaraderie in being outsiders, those that feel like they start from a lesser place. Everything I do now reflects this.

NA: And yet you’re a tenured professor in Vanderbilt’s Fine Arts Department.
MH: I’m an artist first and foremost. I’m visual. I feel strongly about the power of art and what it can do to people. Vanderbilt is a good fit. 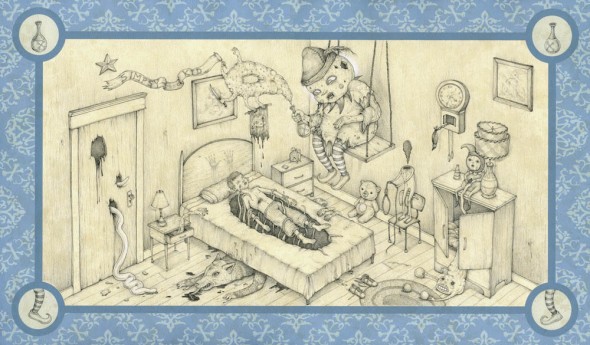 NA: What do you get out of teaching?
MH: As teachers we want to positively affect students’ lives and instill passion. Academia is super weird. But I was fond of Kafka as a child (laughs). There is a necessity of rules. So it’s absurd, especially for teaching art.

NA: What do you do when you’re not teaching?
MH: I hole up and draw. Time is my enemy more than inspiration. I have a logjam of ideas and no time to do them. Art is therapy.

NA: What does your family think of your art?
MH: My mom enjoys what I do. I was lucky because she pushed me into art. I thought I’d get an accounting degree or something, and she said no, that’s who you are. She is a self-taught artist herself.

NA: Why are you drawn to printmaking?
MH: My work in general has references to cartoon or tattoo culture, and there’s a nod to the early prints of German Expressionists. I like how I can take a naive or simplistic drawing and apply it to a sophisticated, technically intense process. It adds sincerity and intensity to the image. It makes it harder to dismiss.
Mark Hosford is represented by Cumberland Gallery. www.cumberlandgallery.com