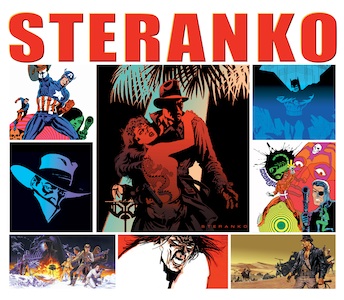 Jim Steranko is a rock star in pop culture. As an illustrator, musician, art director, magician, fire-eater, designer, escape artist, filmmaker, pop-culture lecturer, and publisher, Steranko has cut a ferocious path through the entertainment arts. His innovations as artist-writer on Marvel’s S.H.I.E.L.D., Captain America, and X-MEN revolutionized the comics form.

Steranko earned lasting acclaim for his innovations in sequential art during the Silver Age of comic books, particularly his infusion of surrealism, op art, and graphic design into the medium. As an illustrator, he has painted a multitude of book covers, record jackets, and movie posters.

Steranko has shown his work at more than 200 exhibitions worldwide, including the Louvre in Paris and the Smithsonian Institution in Washington. His two-volume The History of Comics have sold more than 100,000 copies, and as editor-publisher of the international entertainment magazine PREVUE, he has conducted hundreds of interviews. As a filmmaker, he has collaborated with Steven Spielberg, George Lucas, and Francis Ford Coppola, creating conceptual art and character designs for films including Raiders of the Lost Ark and Bram Stoker’s Dracula.

Steranko was cited by WIZARD as one of the Top Five Most Influential Comicbook Artists of All Time. His recent projects include Domino Lady: The Complete Collection (Vanguard), The Discovery Channel’s Comic Book Superheroes Unmasked documentary, the 2007 Steranko Calendar-Portfolio (Vanguard), STARZ network’s Comicbooks Unbound, and a 2010 exhibition at the Geppi Museum in Baltimore.

His first-ever appearance in Nashville as Guest of Honor at Nashville’s Comic Expo will be supporting his upcoming Vanguard art book and the Steranko: Spirit of America print, created to benefit an Art Scholarship Fund for victims of anti-American terrorism. Meet this living legend at the Vanguard booth at Nashville Comic Expo, Saturday and Sunday, September 14 and 15, 2013 at Nashville’s Opryland Hotel.