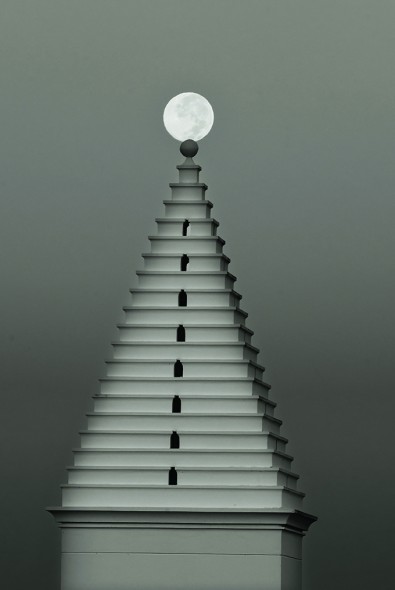 A luminous full moon balances on the tip of a spire . . . a massive sphere is poised atop a triangle . . . twin spires keep watch at sunset, while cascading steps and scalloped roof lines laze in the stark midday sun. These bold visual ruminations on architectural planes are part of Chip Cooper’s evocative new series of work An Architectural Soliloquy on view at The Arts Company in Nashville from October 5 through November 15, 2013.

Cooper is perhaps best known as a color photographer. For years, through a series of photographic essays, he has documented the landscape, architecture, and people of the Southern United States. “Most of my career has been devoted to photographing a sense of place,” says Cooper. “Through the numerous shows and photography books I have done, I have tried to define the South” . . . using “landscapes, details, and abstracts, as well as people, to help tell the story.”

In recent years, Cooper’s focus has shifted from the Southern landscape to the streets of Cuba. In 2012 he published Old Havana: La Habana Vieja in collaboration with Cuban photographer Nestor Marti. His Cuban photos are richly saturated with color, reveling in the vibrant atmosphere and street life of Havana. Cooper began working with Marti in 2008, walking the streets and capturing the essence of old Havana in what Philip D. Beidler describes in the book as a “dance of the photographers. Working together, working separately . . . one finding a shot, the other facing elsewhere, both finding a subject simultaneously, yet working completely different angles,” writes Beidler. Cooper’s newest project will focus on Cuban peasants, enabling him “to shoot both landscape and street, and I could not be more excited.”

The current show of black-and-white architectural photography had its genesis in a series of conversations with Arts Company owner and curator Anne Brown. Brown and Cooper took a wide-ranging look at the scope of his work, which includes commercial work, book projects, and fine art photography. Much to Cooper’s surprise the works that kept coming to the fore were the black-and-white images in his portfolio—specifically photos from a commercial shoot at a vacation community on the Florida coast called Alys.

For Cooper, the new series of photos has been a throwback to his photographic roots—in particular to the work of Paul Strand and Walker Evans, whose works Cooper cites as major influences. In many ways color photography can be more forgiving than the more exacting medium of black and white, where the tonality and richness of color have been stripped away.

Cooper has been amazed at the range of color that can be achieved though a black-and-white pallet. “It has been exciting for me to not use color as the primary item to sustain an image but to rely upon light, contrasts, shapes, and lines,” he says. “The negative and positive space can now become the essence within the image, a very quiet feeling letting shapes and textures dominate the image.”

It’s difficult to look at contemporary black-and white-photography without thinking of some of the giants in the field such as Alfred Stieglitz, Dorothea Lange, Robert Frank, or Ansel Adams. The photographs that comprise Cooper’s Architectural Soliloquy have been stripped of the humanistic visions of photographers like these. What one is left with is the pure formality of the composition—elegant, visually ravishing images from a manufactured reality.

Chip Cooper’s exhibit An Architectural Soliloquy is on exhibit at The Arts Company until November 15. For more information on Cooper visit www.chipcooper.com and www.theartscompany.com. 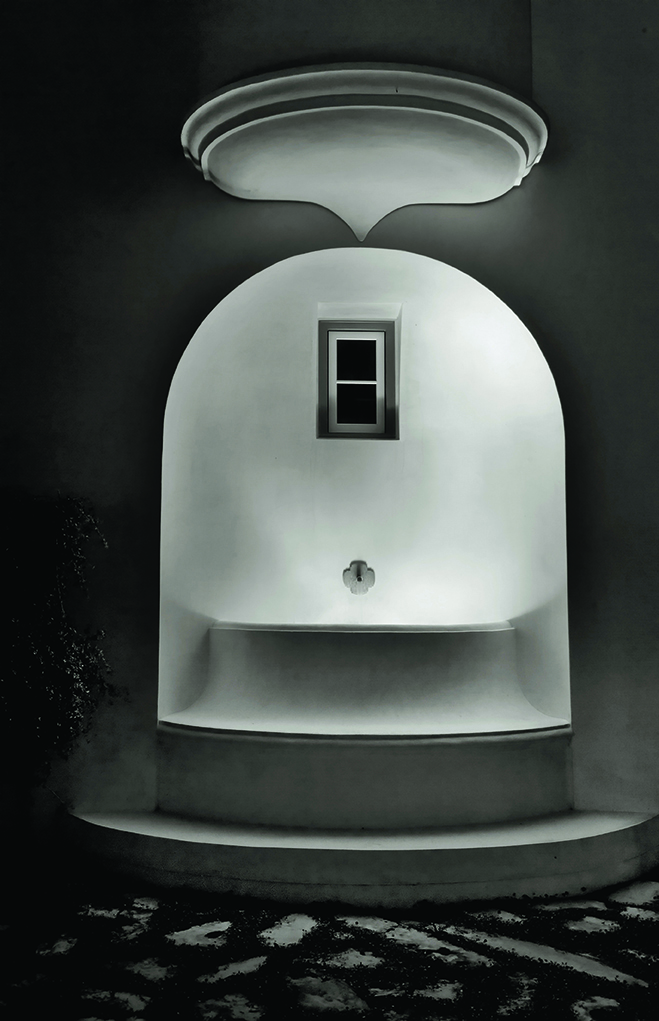 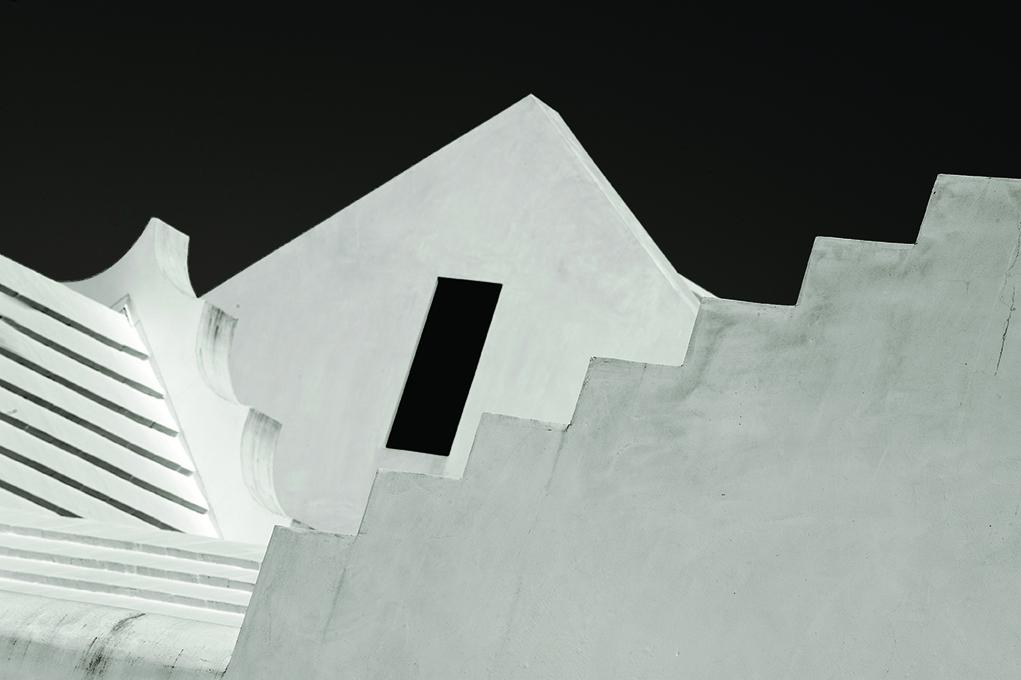 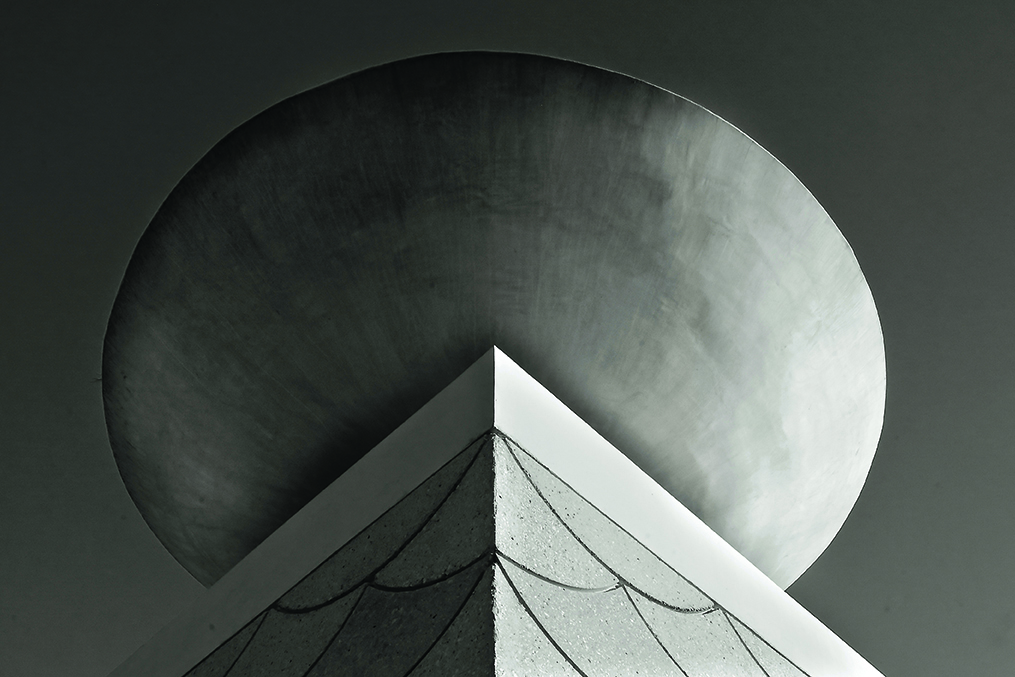 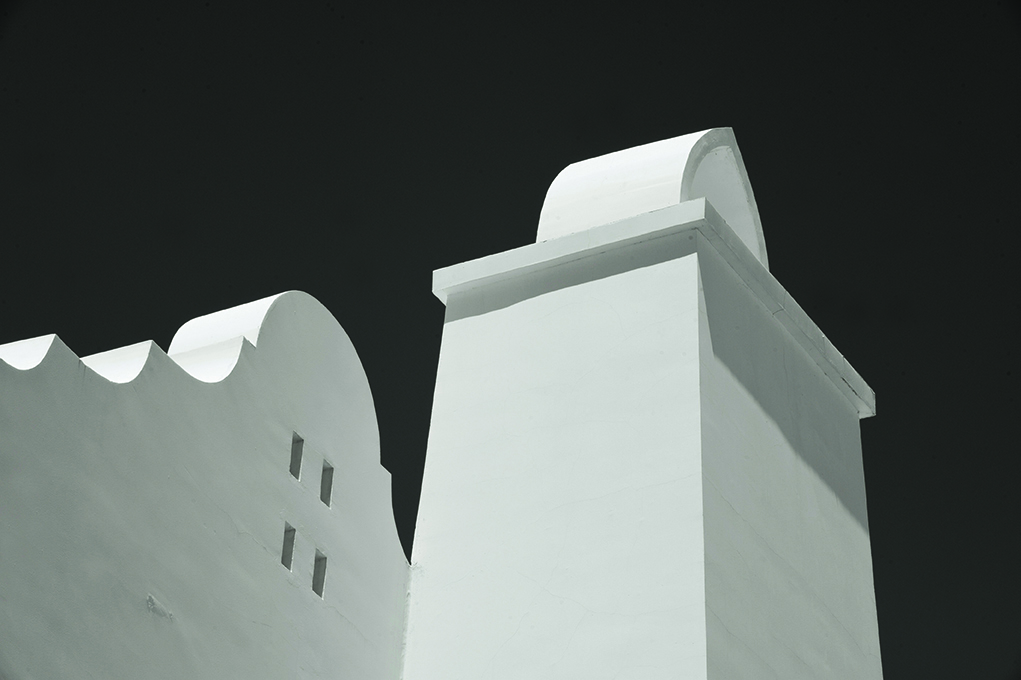