Andrée Ruellan was a painter of the 1930s and ’40s whose complete body of work spans almost the entire twentieth century. She was born in Manhattan on April 6, 1905, to parents who were ardent pacifists and members of the socialist movement. They had left France in order for Ruellan’s father to avoid compulsory military service.

Andrée Ruellan began drawing very early. Something of a prodigy, at the age of 9 she was invited by the celebrated artist and leader of the Ashcan School, Robert Henri, to join a group show in New York City’s East Village. In that show, she contributed watercolors and drawings, which were sympathetic depictions of scenes from ordinary life that the young Ruellan observed on the streets of New York. That same year she even had an illustration published in The Masses, a progressive magazine dedicated to socialist political causes. 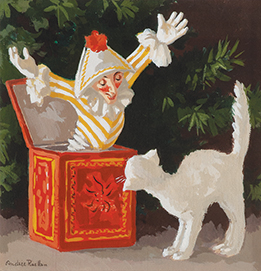 In 1920, the then-15-year-old’s father, an aviator, was killed in an airfield accident, resulting in her need to sell her work to support herself and her mother. Later that year she received a scholarship to study at the Art Students League of New York with the noted painters Maurice Sterne and Henri.

From 1922 to 1929, Ruellan, supported by yet another scholarship and accompanied by her mother, traveled to study in Rome and then on to Paris where they settled. In Paris, under the influence of Sterne, Picasso, Pascin, and Matisse, her painting style evolved and her subject matter became figurative. It was also in Paris in 1929 that she met and married John W. Taylor, a fellow painter. In the 1930s the couple and her mother moved to Shady, New York, where for decades they were part of Woodstock’s vigorous artist colony.

It was during the Depression that Ruellan and her husband, seasonal residents of New York City and fans of extended road trips, began traveling to the South, notably Charleston and Savannah. These trips and a short residency in New Orleans cemented an emotional bond for her with the Southern culture, which resulted in some of her most memorable works. Her paintings from that period are remarkable for their portrayals of ordinary African-Americans at work and at play.

What moved and inspired her was that in spite of the poverty and the constant struggle for existence that she witnessed during those travels, so much kindness and sturdy courage remained. That humanity is what she strove to capture in her painting.

She continued to draw until she was well into her eighties, remaining a Realist with a Modernist’s sympathies, committed to the idea that art should represent solid, flesh-and-blood humanity. It was her desire to convey the warmer human emotions, never without strength and clarity.

As it did for most female artists of her time, the experience of living and working in America and Europe provided both frustration and rewards. Among the rewards of a milieu conducive to creativity was the opportunity to study with her period’s greatest teachers in the world of the arts. The frustrations included imposed limitations of access and being persistently marginalized by her age and sex, and, like most women of that century, although she did receive awards and accolades she never fully received the level of recognition that she deserved.

This painting was gifted to the brother of the present owner by Andrée Ruellan. Similar paintings executed in this illustrative manner have sold at auction for $900 to $1200 dollars.

While researching Andrée Ruellan, much to my surprise and then to the owner of this work, I discovered that the painting had been licensed to the American Artists Group, a still-active Atlanta–based greeting card company that “ . . . in 1935 with the encouragement of such famous artists as John Sloan, Grant Wood, John Stuart Curry, and Rockwell Kent . . . introduced art to greeting cards . . . ”

Visit www.americanartistsgroup.com/aag_information.html to read the rest of their story.

The Andrée Ruellan illustrated card is still available for purchase.