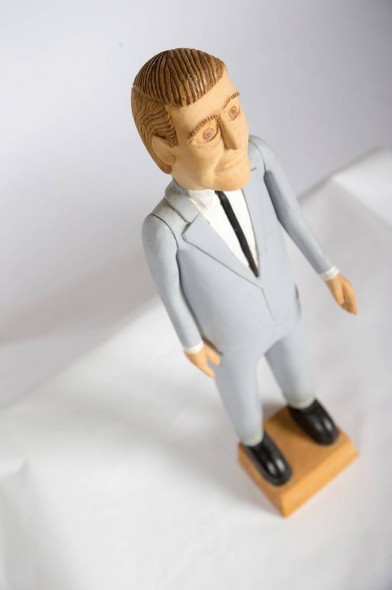 It seemed like the right fit when I was asked to write a story about some forty pieces of Outsider/Folk Art that Jacqueline and Ned Crouch had recently gifted to Austin Peay State University in Clarksville. As a fellow collector who has, for many years now, known Jacqueline and Ned and their unending passion for collecting, it was a welcome assignment. 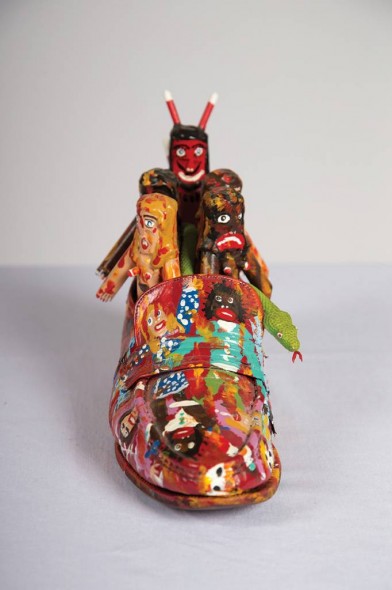 Austin Peay had a small collection that included pieces by the likes of William Edmondson, Inez Nathaniel, Enoch Tanner Wickham, and Bill Traylor, but until Jacqueline and Ned’s gift, the university’s collection could have been dismissed simply on the grounds of its size . . . or lack of size.

Yet now, with the inclusion of the Crouch gift, new life has been breathed into Austin Peay’s collection. The university has taken on far more than a commitment to house the gift. Austin Peay has now joined a small but important group of museums and institutions, worldwide, which have begun to consider non-traditional folk art as something more than whimsical sideshow material.

For me, as a collector living in the heart of Middle Tennessee, the news of the Crouch gift could not be more welcome. But the value of their gift reaches far beyond my band of fellow collectors. While other regional museums have picked up a piece here or there, no other Mid South institution has made a commitment to the movement on the level that Austin Peay now has. Stepping up to the plate, the university has purchased a building in the heart of downtown Clarksville to house both the art and their now-ballooning collection of archival study materials about non-traditional folk art that includes photographs, slides, and printed materials. 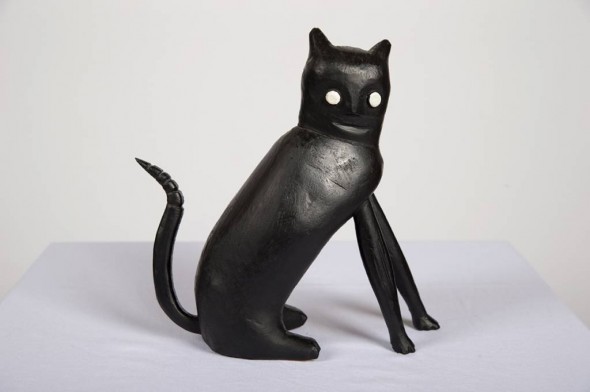 It seems a bit odd to be linking Austin Peay with the National Gallery, the Metropolitan Museum, both Harvard and Yale, and the Museum of Fine Arts in Boston, but when it comes to collecting non-traditional folk art, that’s the very company the institution keeps these days.

My time with Jacqueline and Ned was a welcome reminder of why I began to collect. Unlike so many collectors I’ve known over the years, Jacqueline (Ned pronounces it flowingly, the way I remember folks in Palm Beach pronouncing Mrs. Onassis’s name when I was a kid) and Ned didn’t collect to impress. It has always been about passion.

They are far removed from those collectors I group under the “Charlie the Tuna” heading. You know, the ones who collect so that someone (in Charlie’s case Star-Kist Tuna) will think they have good taste. (Now, if you’re too young for that reference to make any sense, you might want to go to YouTube and make your way through some of the Star-Kist commercials of the ’60s and ’70s.) Their collection has been driven by passion at every turn. Because they share an educated and critical understanding of both beauty and creativity, the collection reflects the depth and wealth of their knowledge. 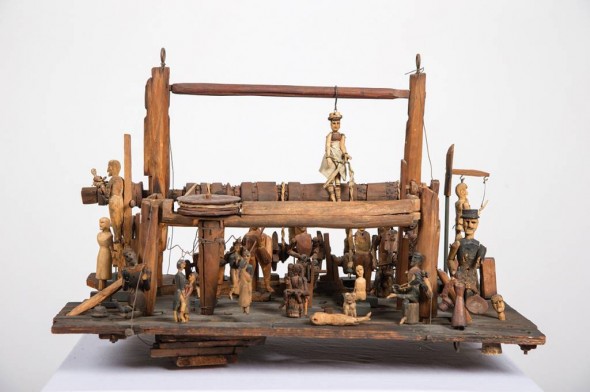 Whether speaking of an object now recognized as a masterpiece of American folk art or the cast-iron widget from a machine next to it, it remains all about their passion for the object. Best of all, they are full of stories about the objects that have filled their well-lived lives with joy.

Few great collections of folk art began with folk art. More often than not, the collector began with art that had an academic seal of approval and then, over time, was drawn to something that was outside the academic lines. 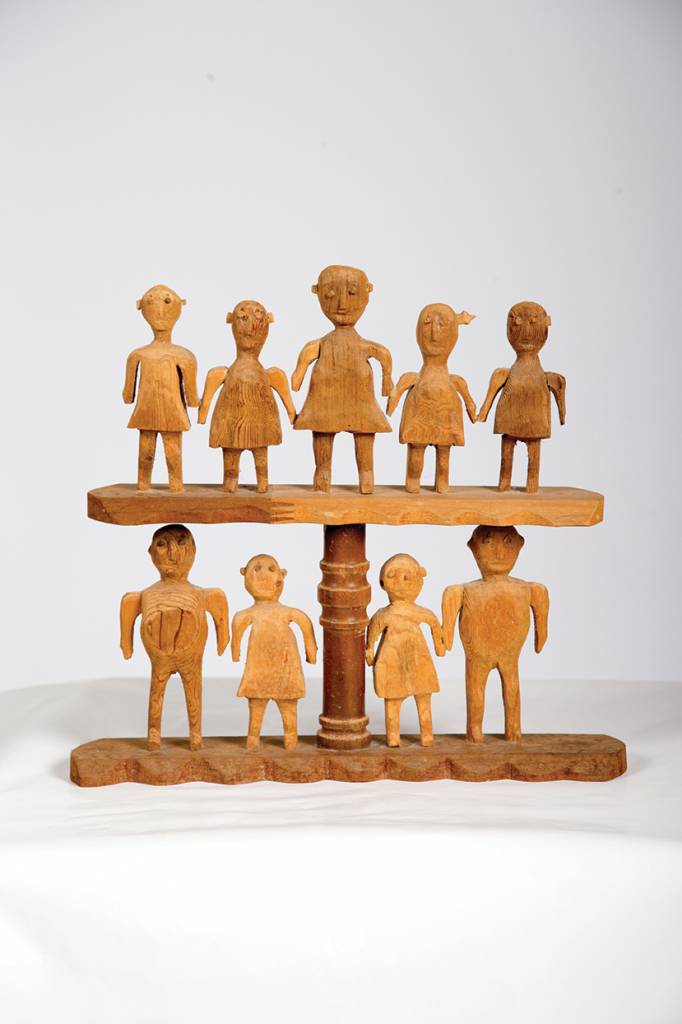 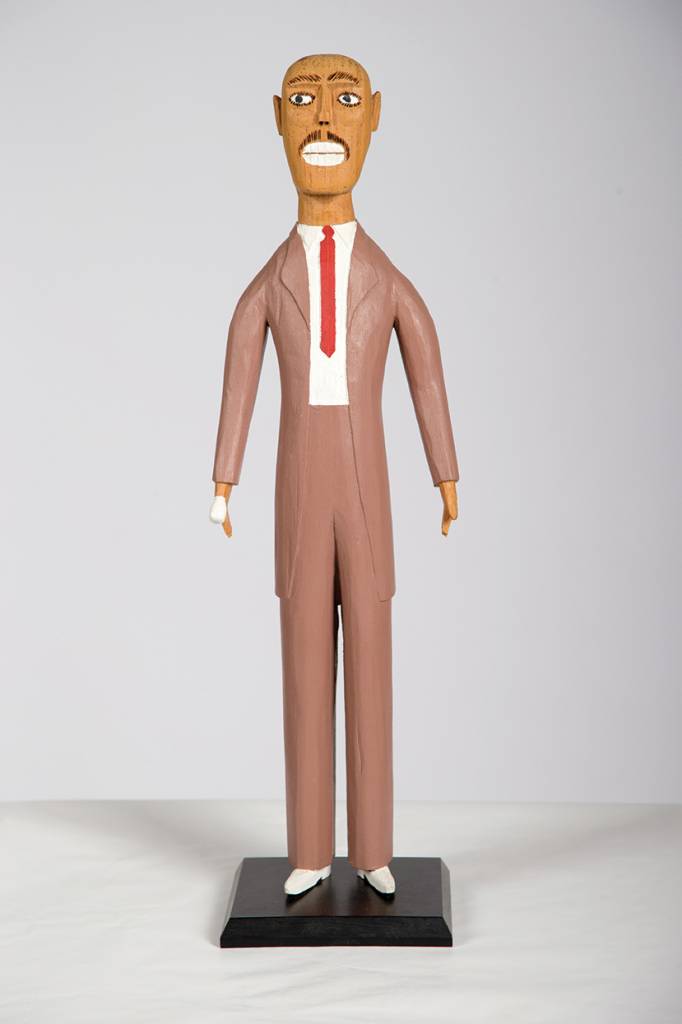 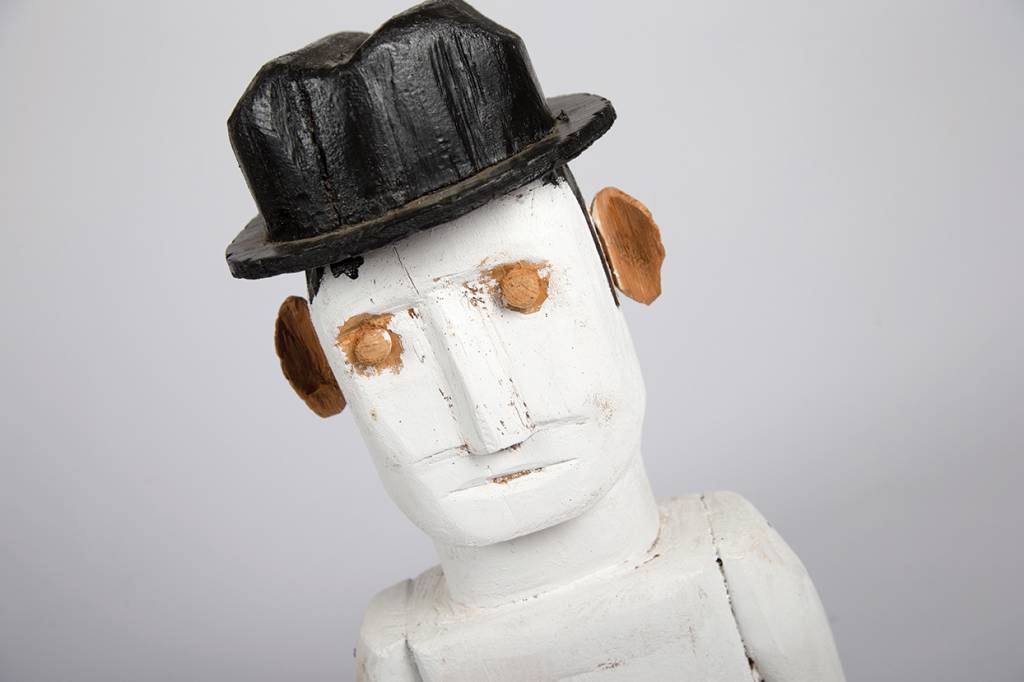 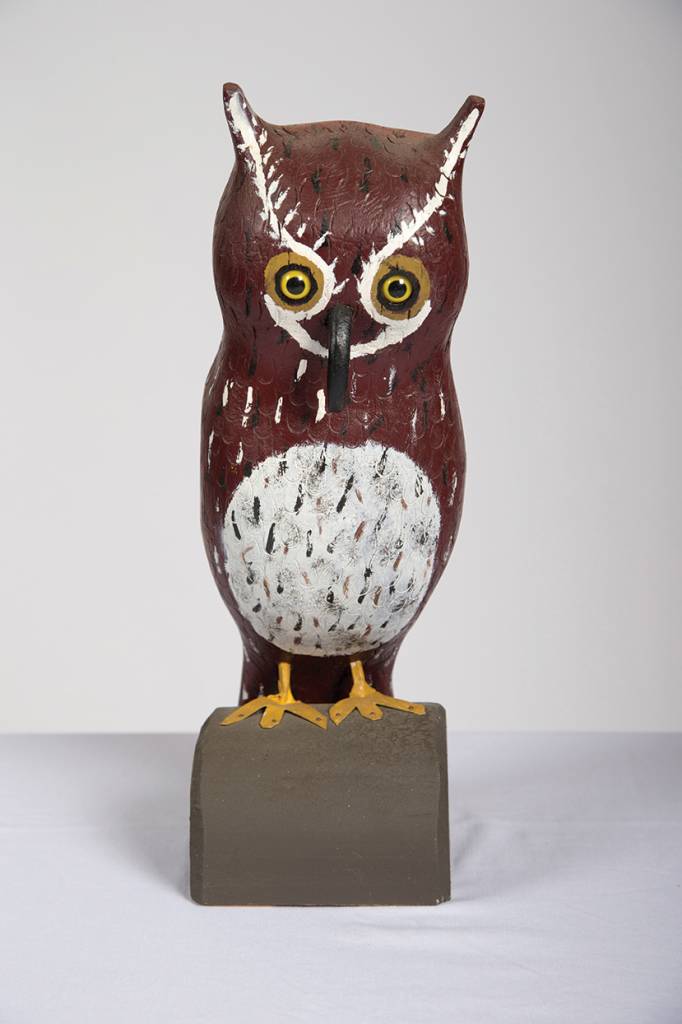 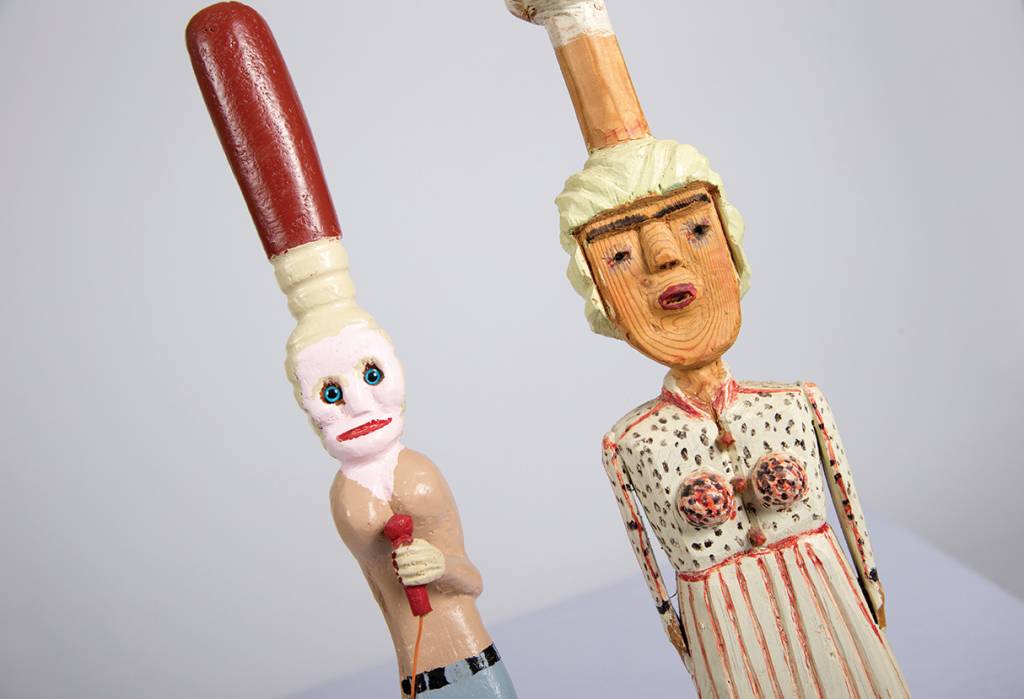 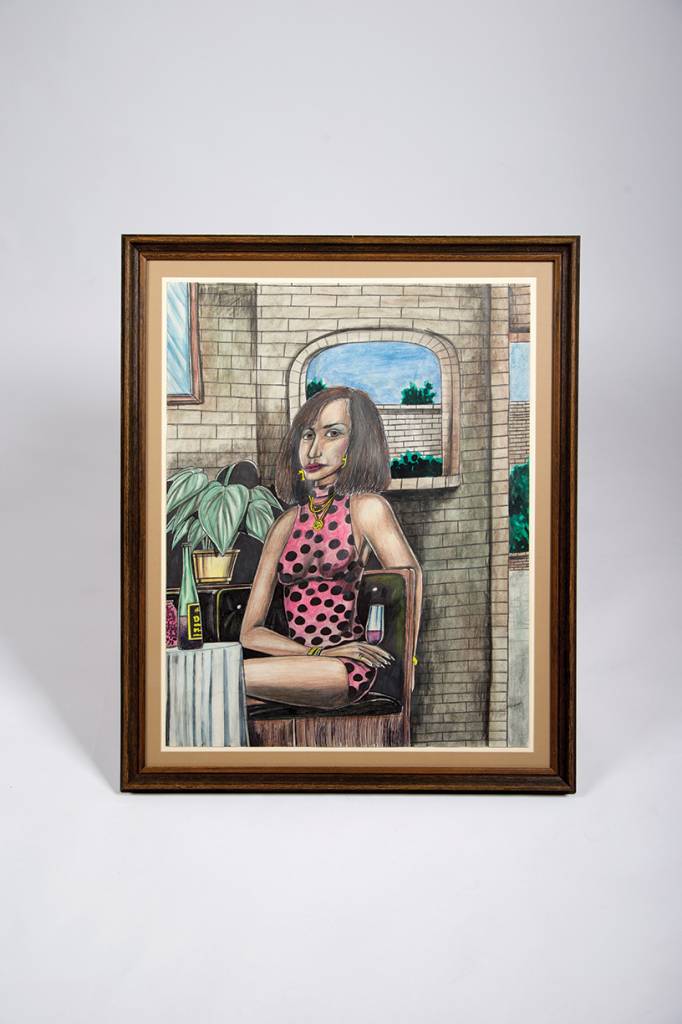 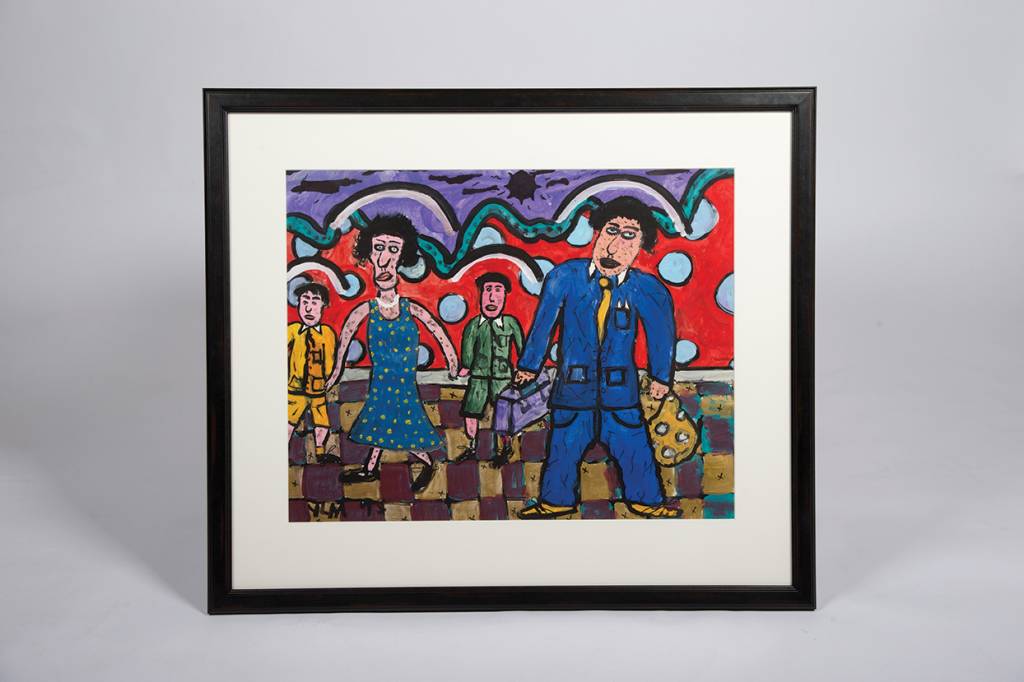 Jacqueline and Ned still have that first piece, a small carving that cost them $100 of their then-smaller budget. They brought it home, placed it in the center of their mantel, sat down across from it . . . and they remember asking each other, “What have we done?”

I well understand that rush mixed with both excitement and dread. Soon there was no stopping them as they moved among the self-taught artists they seemed to discover at every turn. They had been bitten, and their passion flourished in a world that was both familiar and foreign.

Now, with their gift to Austin Peay, Jacqueline and Ned are affording others the opportunity to enter their world and partake of the feast they have shared, together, for so many years. It is a remarkable gift. Austin Peay has been given the opportunity to lead the way in an area of study far too long ignored. And in so doing, the university has been given the chance to do what universities were created to do, enlighten the world around them.  The outsider art collection is on exhibit at the Mabel Larson Gallery at Austin Peay State University. It is free and open to the public.

For more information about the Mabel Larson Gallery visit www.apsu.edu/art/mabel-larson-gallery.