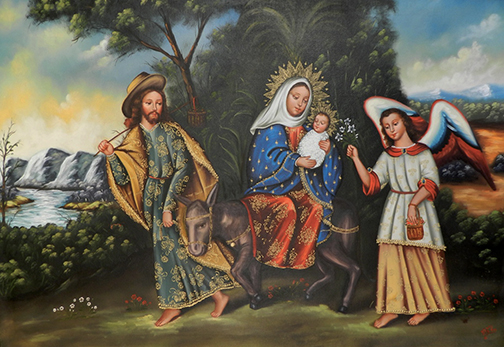 Clorinda Chávez Galdós Bell, La Huida de Egipto (The Flight Into Egypt), 2002, Oil on canvas, 31.5” x 47” Bell writes, “It’s from Matthew 2, 13-15, a common theme in art that identifies the Holy Family with the plight of immigrants. The flight into Egypt is shown with the Virgin Mary, the Christ Child, and St. Joseph in company with the protecting archangel.” 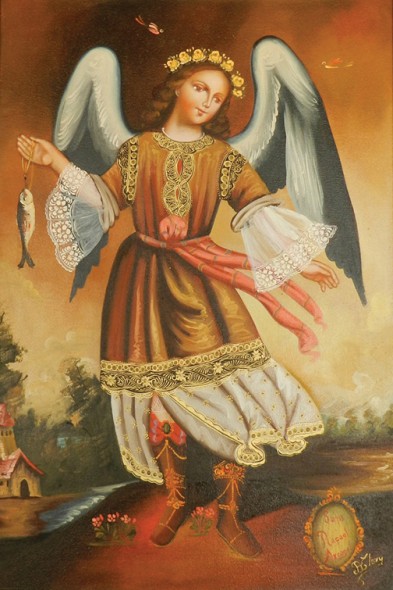 Clorinda Chávez Galdós Bell, Arcangel Rafael, 2007, Oil on canvas, 24” x 16” Bell writes about him, “His name means Light of Health.  He is able to heal any illness and he is shown with a fish.”

Peruvian native Clorinda Chávez Galdós Bell will exhibit her work beginning February 13 at the Tennessee Arts Commission. Like her ancestors, Bell paints in the tradition of the Cuzco School of Religious Art, a style of Peruvian painting that was introduced to Cuzco by Italian artist and Jesuit monk Bernardo Bitti in the sixteenth century. Bitti´s iconography served as a form of religious education for the indigenous peoples.

One of the first women to work in this genre, Bell began painting at the age of eleven and was soon helping her father and brothers create communal canvases in the family studio. Since moving to Tennessee, Bell has continued the family tradition on her own.

Clorinda Chávez Galdós Bell: Cuzco School of Religious Art will be on display February 13 through March 28 at the Tennessee Arts Commission Gallery, 401 Charlotte Avenue. For more information about this exhibit, visit
www.tn.gov/arts/. 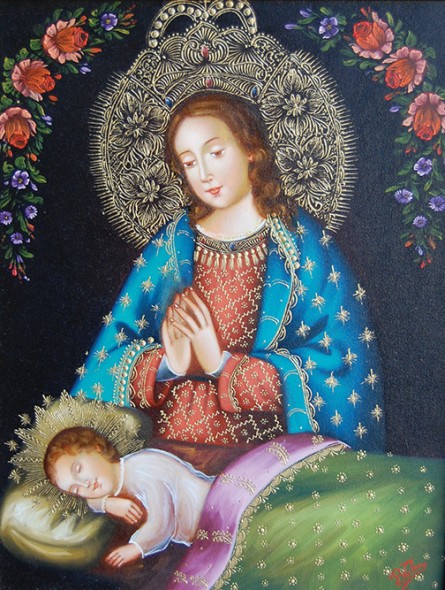