On the Town with Ted Clayton 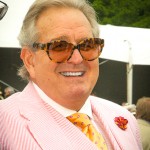 We are presently into the second month of 2014 . . . how did we get here so fast? I always have heard that time passes quickly the older one gets; well, hold on, for I am on a fast train from party to party. Social media coverage has changed over my lifetime as the social affairs have also. Private entertaining in one’s home with hundreds of guests invited has almost become extinct, for so many social affairs in today’s time are based on charitable patrons fundraising. The parties are still most grand, in fact somewhat more sophisticated than in decades past. I fear to say that Betty Banner would have a somewhat difficult time in present-day social coverage. I can remember, from when I was a very young boy, the lavish cocktail dinner parties that my grandparents, Emily and Ted Murray, would host at their home, Murray Hill, in Brentwood. I was always spit-shined and ready to be seen (for only a very short time) and constantly reminded that I was to be seen and not heard. Funny, that has not changed over the decades!

In the height of the social tradition of the 1930s the big city museums were for the rich; they had little influence in the art world and were never ever used for wedding receptions or dinner dances. Painting, sculptures, and other works of fine art were for the wealthy to enjoy in the privacy of their own palaces (but I do realize that the wealthy patrons were the financial support of the museums). In the 30s there were art supporters such as Gertrude Vanderbilt Whitney and Mrs. John D. Rockefeller, Jr. (Museum of Modern Art) that saw the importance of having their own museums. For the most part entertaining took place in the grand and imposing estates, well-decorated townhouses, and private clubs. Gracious hostesses of the day included Thelma Foy, Birdie Vanderbilt, and Elsa Maxwell, all known worldwide as leading New York hostesses. Entertaining in Nashville takes place today usually to host a patrons party for charities or the fine arts. Still welcoming hundreds of guests to their homes are Nashville’s finest grand dames of society, including Ellen Martin, Margaret Ann Robinson, Alice Hooker, Kate Grayken, the Eskinds, the Frists, the Ingrams, and many more generous benefactors of the arts, among them of course the Frist family for their contribution of the Frist Center for the Visual Arts.

The socials of the 30s dressed for the evenings, ladies in long dresses, jewels, and furs escorted by their gentlemen in black tie or often white tie. Suits and skirts were seen only in the balcony of the opera and symphony halls; never ever was one seen in street clothing at a social affair. Life for the socials in this period was, in the words of Cole Porter, “delightful, delicious and de-lovely” just as it is today in Nashville, the “It” social city! 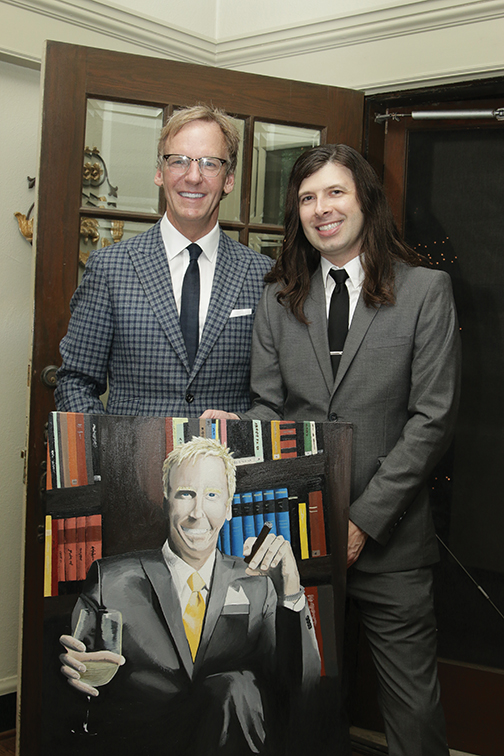 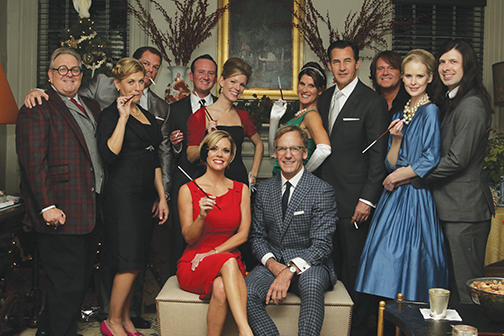 Speaking of private dinner parties, which I usually do not cover, there is one Nashville bachelor that knows how to entertain in style with all the bells and whistles. Bill Knestrick hosted a Merry Mad Men dinner party at his Green Hills Spanish villa during the holiday season (of course I was an invited guest or you would not be reading this). The seated, most elegant dinner was done in 60s style, with his table adorned with silver candelabras, satin-banded damask table cloth with accompanying linen, hem-stitched, monogrammed napkins. The china and crystal were patterns of the era, with floral arrangements typical of the period. The dinner menu was most 60s style with beef Wellington as the main entrée. So you see, we still do entertain in grand style in our homes. I must mention that Bill did have event planner to the stars Hugh Howser to help out with last-minute details, and we must remember that behind every mad man there is a sexy, lovely lady as was the case with Stephanie Craven. Yes, 2013 was just that sort of a social Mad Men year! 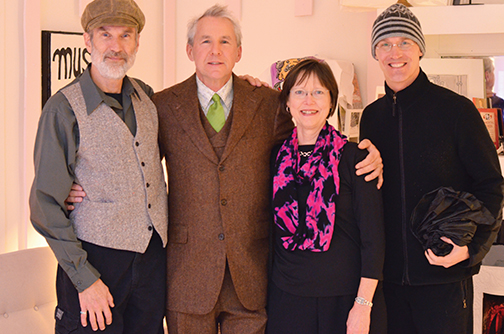 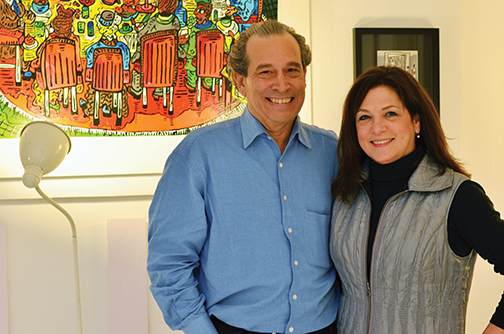 Another holiday party of note during the Christmas season was hosted by Nashville’s  wild and crazy Myles Maillie. Myles hosted some three hundred folks on a cold and rainy December evening at his White House on White Avenue. Festive holiday attire was seen, as many of the guests were on a party marathon that evening, party hopping from one celebration to another. If you have never been to the Maillie White House it is a must, and believe me, Mr. Personality Maillie will welcome you with open arms. 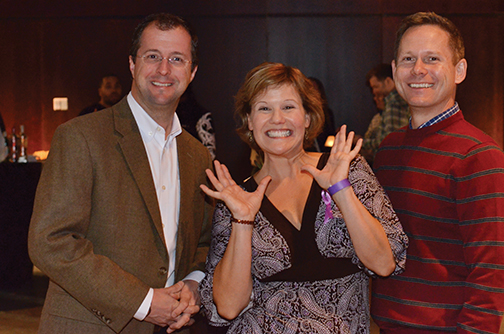 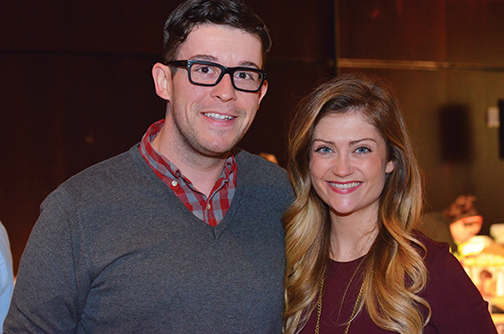 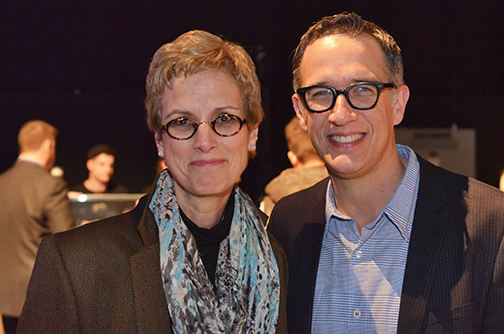 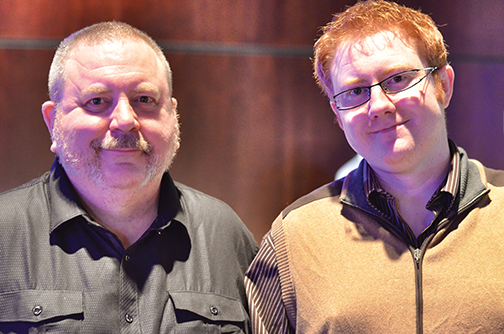 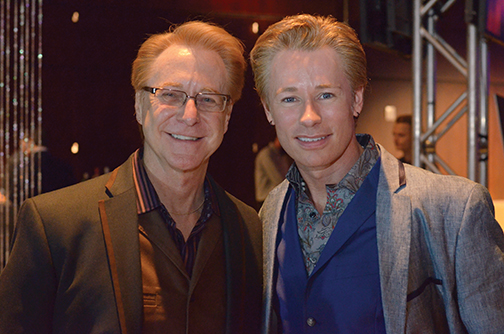 There were a few outstanding events held at the end of last year that I want to share with you. Nashville GLBT Chamber of Commerce’s second annual Tastefully Unpredictable Party was held at Oz. Local restaurants showcased the culinary skills of some of the city’s most talented chefs. Bruce Pittman, a member of the Chamber Board, headed this affair and was oh so busy greeting enthusiastic and hungry patrons Gary Tisdale and Nick Stephens, Keith Sullivan and Matthew Corti, Van Pond and David Glasgow, Heather Thorne and Paul Vasterling. OK, I know you are waiting to know my favorite food station: Charles Phillips and Dario Olivera of 1808 Grille prepared my favorite, Tuna Poke. Almost forgot to mention that Spangler Entertainment provided a new form of social entertainment, a digital graffiti wall where one paints on a screen with a colorful marker and it shows up life size—you know one of those computerized toys. The digital screen was a hit, and I must say the possibilities are endless with a paint marker, LOL.

Artcletic, Nashville’s premier juried art show and sale, was held last season at the University School. Carrington Fox, Kelly Linton, and Arnita Ozgener hosted this artisan pop-up market. A super-great patrons party was held the night before the show opened to the public, where friends were busy grazing the wonderful creations. Libby Page, Anne Blake and Judson Rogers, Katie and Scott Isaacs, Amy Garrison and Tom Curtis were seen enjoying this artful evening. Of course I got in trouble with my favorite glass designer, but come on now, I did not have a pair of aqua-colored-glass deer antlers in my collection. 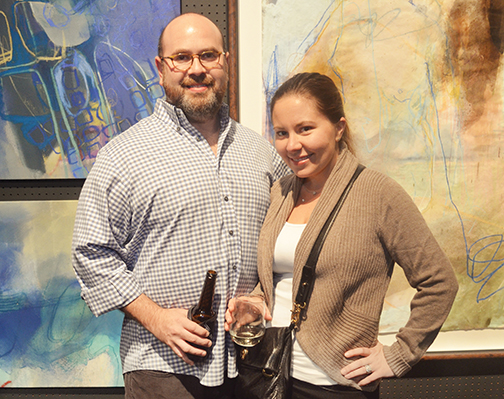 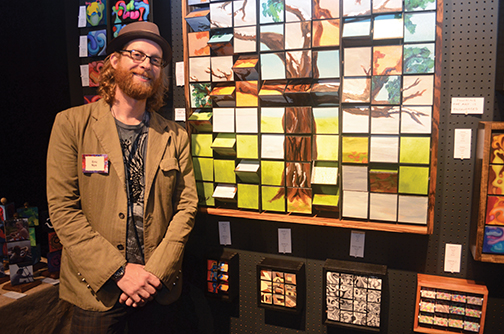 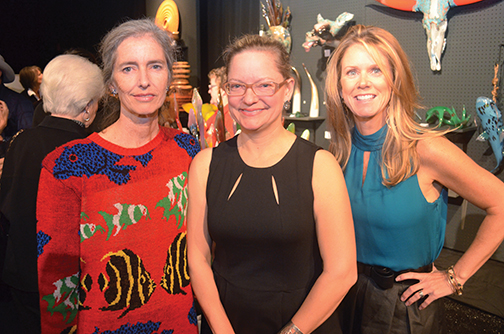 A jazzy fundraiser, Jazzmania, an annual event supporting the Nashville Jazz Workshop, was held at the Factory in Franklin. Delicious food by Sargent’s Fine Catering, live and silent auctions, and, of course, phenomenal jazz music by some of the world’s most talented musicians, including the one and only Kirk Whalum. Sophia and Zac Forbes, Workshop directors Roger Spencer and Lori Mechem, Jonathan Hornel, Kit and Brook Babcock, Honorary Chair Ken Roberts with lovely wife, Delphine, and Ellen Pryor were snapping on 2 and 4! 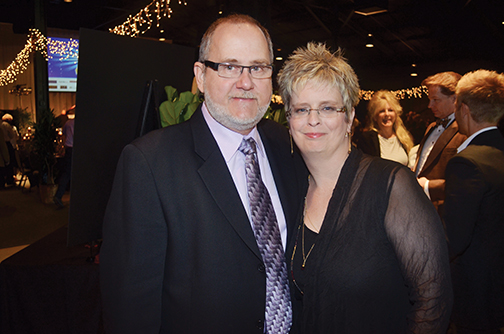 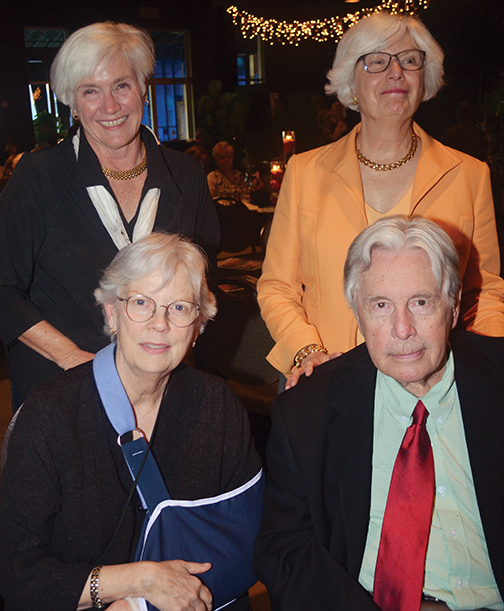 Hope everyone stays warm during this cold winter season, and I look forward to seeing all at the upcoming Antiques and Garden Show at the Music City Center.