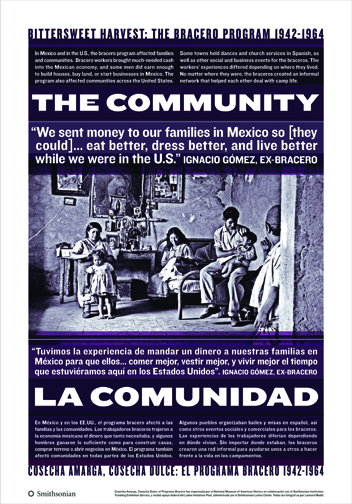 Casa Azafrán Community Art Gallery offers an opportunity to explore a little-known chapter of U.S. history with the exhibit Bittersweet Harvest: The Braceros Program, which continues through March 14. This traveling, bilingual exhibit from the Smithsonian’s National Museum of American History is co-sponsored by Humanities of Tennessee.

Oral histories, archival panels, objects, and a documentary tell the story of the largest guest worker program between the United States and Mexico from 1942–1964. During this period, the U.S. actively recruited Mexican workers for short-term jobs in agriculture, mining, and railroads across twenty-eight states, including Tennessee.

“The Bittersweet Harvest exhibit shows the history of the burdens endured in the name of economic progress. But it also speaks of the universal experience of survival, determination, and grit,” says Tasneem Tewogbola, Conexión Américas Communications Strategist and Casa Azafrán Cultural Engagement and Events Coordinator. “The story, depicted with oral history accounts and photographs, truly shows the complications of the pursuit of security and profit.”

The exhibit, which opened in December, has already engaged community discussion through “Life on the Fence: A Long View of Guest Worker Programs.” The gallery encourages active conversation around this powerful exhibit. “A number of MNPS teachers for Spanish language and culture have brought students to Casa Azafrán to view the exhibit as part of their study of Mexican-U.S. relations. We invite more teachers and students to visit and use the art to further the conversation about immigration reform and Nashville’s growing international communities.”

At the conclusion of the exhibit, a book fair, scheduled for March 22 and sponsored by Scholastic Books, will share Braceros-themed stories and stories from multi-cultural authors, as well as a puppet show and exciting global fare.

The Braceros exhibit is free and open to the public. For more information, visit www.casaazafran.org.