Terry Rowlett is a familiar figure among Nashville artists. Then again, he is just as well known and welcome in other places he’s called home. From New York’s Hudson River Valley to Athens, Georgia, where he earned his master of fine arts at the University of Georgia, the Arkansas-born painter has settled in a number of communities, staying long enough to leave his mark and catch his breath before rambling on to his next stop. 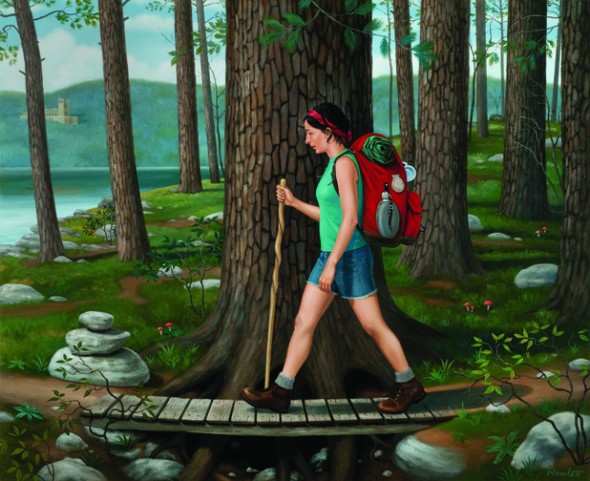 It’s the ramble, more than the settling down, that gives insight into Rowlett and his aesthetic. His upbringing was steeped in fundamentalist Christianity; though he has long left his faith behind him, its olio of drama, moral absolutism, and simple, graphic imagery lingered as he evolved his identity as an artist. His emerging skepticism added a volatility to the mix, as did his embrace, for a while, of both sensual indulgence and respect for traditionalism.

Rowlett acknowledges his “life of contradiction” yet also emphasizes the resolution with which he holds onto his convictions. Rowlett doesn’t just quibble with aspects of the avant-garde; instead he takes issue with “an era that embraced images of a urine-soaked crucifix and a dung-covered Madonna as cutting edge.

“Up until grad school, I was open to anything,” he admits. “I was open to the shenanigans of what modern artists do. There was a lot of ‘art for art’s sake’—installational stuff, conceptual art, shock art—and many of the people doing it couldn’t understand or even care what they were looking at. When I was about 30 years old, I decided that I really wanted to communicate to bigger audiences. A good old-fashioned, figurative, narrative oil painting with symbolism is about as direct a way as anything to get your message across. For thousands of years, it seems to have been effective.”

Rowlett’s recent Nomads and Outsiders show at Zeitgeist Gallery makes this point eloquently. With their clear lines, nuanced but solid color fields, and subjects that emanate strength and solitude in pastoral yet invigorating outdoor settings, they reflect the artist’s ongoing drive to search for meaning in a post-religious life, as well as his sense that its secrets are most likely to be found in nature.

“I like the title I came up with for that show, being an outsider as an artist and a person with my lifestyle and traveling,” he said. “The people in these paintings are outside the norm. Their lives are revealed in a more natural state. That’s been an important thing for me lately, to move a little bit away from the modern world to find a little peace out there.”

Most of the figures in his Zeitgeist exhibit fall into two representations: powerful, confident women and men of more obscurity, hidden in heavy, red winter jackets. “I like to paint almost heroic types of people, going out on a limb,” Rowlett explains. “I often choose my models from interesting people I know or am aware of who exemplify those traits. The women don’t have a guy around. It’s not one woman; it’s like a little team of women on the shoreline out for the day or the weekend. The woman hiking in The Seeker is very independent, a New Englander friend of mine. She literally hiked the entire AT (Appalachian Trail) after 9/11.”

But these images are self-referential too. “All of those guys and gals camping with their backpacks out on the shoreline, that’s what I’ve been doing for the last four or five years,” Rowlett says. “I’ve been doing a lot of camping and hiking, lots of adventures in the more rugged states. I’m moving away from society and the car and the radio and the computer and getting more out there for peace and reflection.” 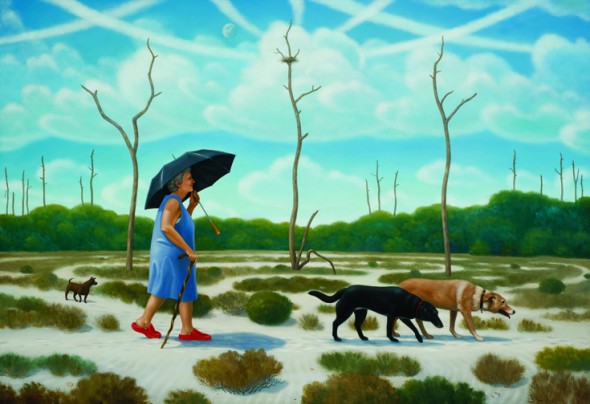 That said, it’s logical to assume that The Traveler’s Rest is especially autobiographical, with its depiction of a hirsute wanderer on a forest trail, stopping to savor a cigarette and bask in stillness and silence. “It’s autobiographical for me,” Rowlett admits. “But oddly enough, that particular friend of mine doesn’t camp. He’s a musician in a metal band in Athens. But he has the look. He’s almost like a prophet/saint/hobo/derelict. I don’t believe in faiths anymore, but I like the idea of those old tortured saints, waving their fists at the inhabitants of the city. To me, that’s what this guy looks like.”

Even as he heeds the call of the wild, Rowlett harbors warm thoughts about many of the stations on his road, including Nashville. “I liked it a whole lot, to tell the truth,” he says. “I liked that Nashville has a real working relationship with artists. No one is out there on the periphery, like, I wish people gave a darn about art! Everyone cares about art now in Nashville, and I love that.”

And so we can look forward to Rowlett’s passing our way now and then. His real home, though, is between whatever his points of departure and arrival are. “I’ll probably be poor for the rest of my life, wandering around and questioning,” he says.

“This seeker lifestyle of always zipping around to so many different places is tiring. But it’s the only thing that really turns me on. That’s why I do it. It stimulates more answers, more questions, and more art.”