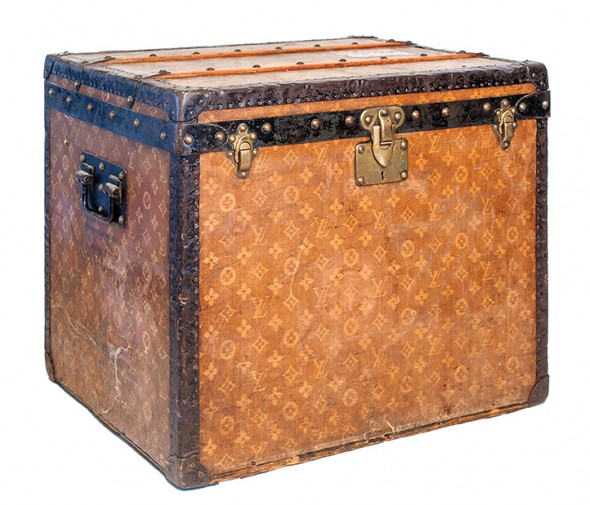 It was the turn of the twentieth century; the destination a luxury hotel in Aix-les-Bains, home to the famed hot sulfur springs located at the foot of the Alps in Southeastern France, and this traveler would be arriving in style with their Louis Vuitton trunk.

In 1837, a 16-year-old boy from the French village of Anchay, Louis Vuitton Mallatier, now commonly simply referred to as Louis Vuitton, began his craft as an apprentice in a Paris trunk-making shop. In 1854, he founded his own trunk-making company. Unlike the round-topped or “domed” trunks which were in fashion at that time, Vuitton’s trunks featured flat, wood-slatted tops and bottoms. His design allowed for efficient stacking, and his innovative canvas sheathing made his creation’s lighter and more waterproof than the traditional leather. Air tight with a purportedly theft-proof patented tumbler lock and a clever array of drawers, cubbyholes, and baskets, the trunks quickly found their way into the first-class suites of steamships and railway trains.

While most of the features of the trunk stayed the same over the years, Louis Vuitton was continually challenged to introduce new canvases, simply to keep ahead of his imitators. His first trunk featured a solid-color gray canvas, the “Trianon” (1858–1876), which was followed by the “Raynee” canvas (1876–1888), a pattern of brown and beige stripes. In 1888 came the introduction of “Damier” canvas, a checkered pattern that was offered in two color schemes. It was after Louis Vuitton’s death in 1892, when control of the company passed to his son George Vuitton, that the now-iconic LV “Monogram” canvas was introduced and patented. George drew his inspiration for the canvas from the drawings of the Aesthetic Movement of the late Victorian era. From that highly popular design period, he chose a flower and quatrefoil device, to go with the LV monogram, to grace the company’s signature canvas. 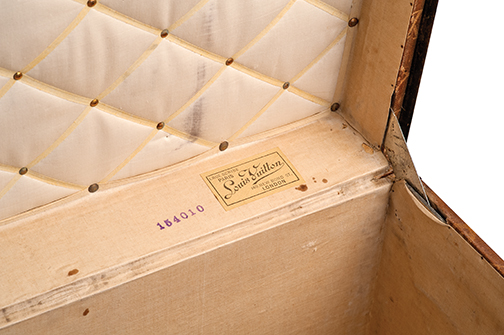 As objects, this luggage blurs the lines of status symbol and functional sculpture. Actively collected, the many forms of LV trunks and suitcases are being repurposed today into household furnishings such as nightstands and coffee tables, simply by adding a sheet of glass to the top surface.

Rarely are vintage examples of these retired travelers found in mint condition with all interior parts intact, but when they are found, their retail cost can go into five figures.
Having purchased this trunk for $800 over twenty-five years ago, the owner may be pleased to know that on the current auction market very similar examples, from the same time period, are fetching $2,800 to $4,000. However, this is a case where I would insist that the owner get a second opinion from a dealer that specializes in LV trunks. As with all antiques and collectibles, condition is always the key factor. Restoration and special features are determinants in the current fair market value.

There are examples of custom-made trunks that command prices in the $10,000 to $30,000 range. Past the contributing factors of provenance and condition, I am not confident that I know all the nuances that contribute to commanding higher prices.

In 2010, the Louis Vuitton Company collaborated on a largely pictorial coffee-table book entitled Louis Vuitton: 100 Legendary Trunks. It contains the history of the company with many archival photographs.