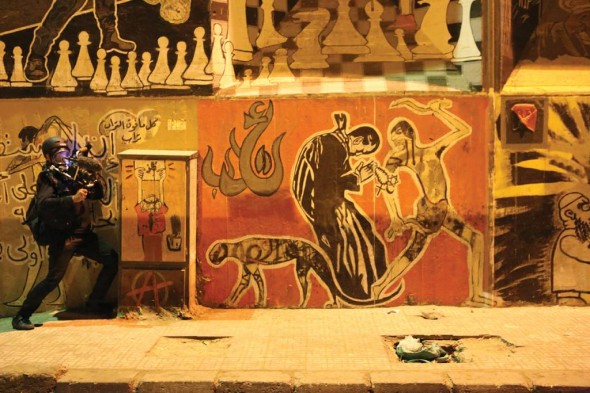 Every year, the Nashville Film Festival presents films that entertain, enrich, challenge, and change their audiences. And while the ten-day festival promises to be the biggest and best it’s ever been, one particular film holds a sort of importance that can be described only as meta art.

Art War, a film by Marco Wilms, recounts the efforts of creative persons during the Egyptian Revolution of 2011. Following the effects of the cognitive dissonance created by religious and political propaganda, the documentary follows the initiative of artists who have turned paint and canvas into a weapon against corruption and violence, creating a sort of anti propaganda to empower those oppressed by the regime and break the mob mentality of those clouded by fear. Through Wilms’s video diary of Egypt’s dark confessions, we can see how music can mobilize revolutionaries, how painted murals can bring war criminals to justice, and how a single photograph of a woman’s sexuality can both inspire and repulse so many.

What makes this film so relevant to the festival are not the metaphorical dangers encountered from the theater, but the literal, physical dangers encountered by those who refuse to remain silent. Acts as seemingly benign as paintings on a wall or wearing certain clothes become defiant answers to the questions begged by violence and misinformation. And since art is expression of the self, the honest communication of these artists shows that bullets don’t stop ideas but drive them further.

Tickets for the screening of Art War, as well as the entire schedule of the Nashville Film Festival, can be found via their website www.nashvillefilmfestival.org. The festival runs April 17 through 26 at the Regal Cinemas Green Hills Stadium 16 Movie Theater.