I’m not a huge scary movie fan and normally, if I’m peeking out from behind my blanky by the 10-minute 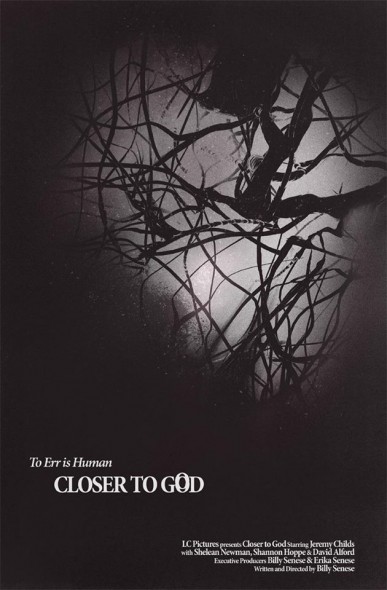 Truth is I’m a wimp and have been since The Exorcist. And when requesting a screener copy of “Closer To God”, a full-feature premiering at the Nashville Film Festival this week, I knew only two things:

Secondly, I knew that Childs plays Victor Reed, a genetic scientist who successfully clones the first human being and that Alford plays Richard, a loyal employee privy to a dark secret that when exposed, ignites a firestorm.

Although watching both Childs and Alford read the back of a Cheerios Box (and being moved to tears) is something easily imagined, I had no idea that for 81 minutes I would sit unnerved on the edge of my comfy purple couch–without a break.

Childs’ performance as the determined (if not entitled) Scientist is masterful and Alford as per usual, delivers not a false note. And the extra great news is that the rest of the cast more than holds their own—especially Shannon Hoppe who plays Claire Reed (Victor’s conflicted and distraught wife) and Shelean Newman cast in the role of Mary (Richard’s wife and reluctant work partner).

When I asked Billy Senese what inspired him to write Closer to God, he said: “I have always loved Mary Shelley’s ‘Frankenstein’, and I really wanted to create my own interpretation of it. To me, ‘Frankenstein’ was about a man with a great mind who had amazing talent and skill, who saw an idea and said to himself: ‘I can realize that,’ and then gets swept up into the single-minded task.”

As the opening credits unfold it is clear this isn’t an amateur thriller where zombies explode to distract from a thin story line. Professionals are at the helm and careful research on cloning has been conducted. Characters are developed and nuanced and although the menacing, measured music score inspires trepidation, there is a hint that the audience might also be challenged intellectually, emotionally—and perhaps even spiritually.

By the seven-minute mark I sense the director and editor know (and care a great deal) about the world I am about to enter and that like it or not, I will be on edge. And I suspect there is something worth learning.

Senese set out to make a film that is not about the discovery and creation of the idea (a clone), but opens with the idea (clone) already being achieved and let the story develop from that point. “We watch the main character wake up into a new reality as he realizes the consequences – good and bad – of what he has created”, says Senese.

By the 10 minute mark there is no question. I am in the capable hands of a grown up filmmaker who loves and respects the craft as much as his subject matter. The next 71 minutes are spent in extended, suspenseful expectation. Clutching my blanky, I’m in for the ride.

Closer to God is screening this week at Nashville Film Festival on April 24th at 9:45 PM and April 25th at 2:30 PM Regal Cinema Greenhills.

In addition to being a wimp, Molly Secours is a filmmaker, writer, speaker and founder of Lasting Legacies Video www.LastingLegaciesVideo.com