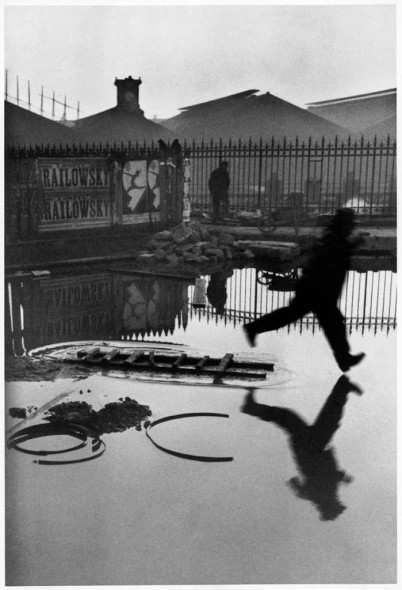 On an overcast day in 1932, French photographer and co-founder of the Magnum Photos cooperative Henri Cartier-Bresson captured a scene Behind Gare Saint-Lazare using a 35mm Leica camera. The iconic photograph could easily be seen in retrospect as emblematic of, if not a metaphor for, Cartier-Bresson’s entire career and philosophy, which he codified twenty years later in a book titled The Decisive Moment (1952). The portability of the hand-held Leica camera was instrumental for the development of photographic practices in the 1930s, and Cartier-Bresson was a theoretical pathfinder for the street photographers, photojournalists, and documentarians coming into prominence at the time as well as to subsequent generations. Scholars have debated whether he was the first advocate for image à la sauvette (image taken on the run), if the moment he describes is decisive, climactic, or dumb luck, and even whether such spontaneity will survive in the digital age. What is indisputable, however, is the enduring appeal of countless photographs by Cartier-Bresson and specifically Behind Gare Saint-Lazare.

A leaping figure is frozen mid-air, a split second before gravity will eviscerate the mirrored surface of the standing water. Much of this gritty Parisian construction site is seen in duplicate: the foreground figure, another in the background, the iron fence, the rooftops, the posters. Even the fallen ladder repeats the lines of the adjacent railroad tracks. Replication and repetition, intrinsic to photography, here suggest a conscious or unconscious reference to the medium. Vertical, horizontal, diagonal, and parallel lines, curves, arcs, triangles, and rectangles come together in what Cartier-Bresson called the marvelous mixture of emotion and geometry. He was trained as a painter and was well schooled in classical art, but he is most often linked to Surrealism because of the movement’s theories regarding chance encounters and the subconscious mind. We cannot miss the underlying visual organization or the communicable ideas present in Behind Gare Saint-Lazare, nor can we minimize the significance of a single moment in 1932 when Cartier-Bresson pointed his camera through a fence behind a Paris train station and snapped the shutter.