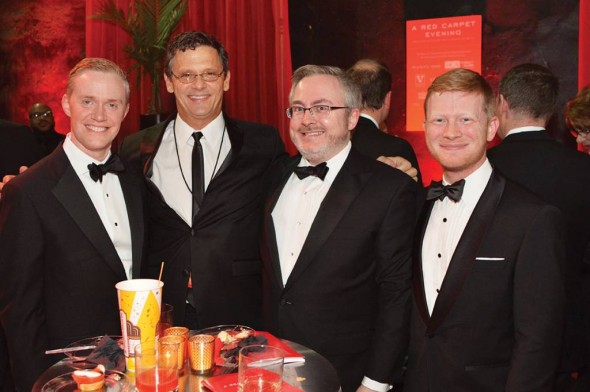 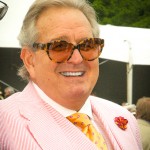 The year, 1929; the location, the Blossom Room of the Hollywood Roosevelt Hotel; the cost, $5 per person; the event, the first Academy Awards Presentation. Some 270 patrons attended this first organized awards ceremony for a seated dinner followed by the award presentation that took all of fifteen minutes. Thank you very much, but I did not cover this first Awards event. Douglas Fairbanks was MC, and the movie of the year was Wings, the only silent film ever to receive an Academy Award. The Academy statuette, Oscar, was designed by MGM’s art director Cedric Gibbons in 1928. Oh by the way, the fare for a movie ticket of the day was twenty-five cents.

The year, 2014; the location, the Belcourt Theatre, Nashville; the cost, $$$ per VIP patron; the event chairs, Holly Hoffman and Amos Gott; the event, the 86th Annual Academy Awards Presentation at the Belcourt. Yes, right here in good ole Nashville patrons walked the red carpet, entering a tented area, which was Belcourt Avenue, designed as the lobby of a fine hotel with maybe somewhat the look of the Hollywood Roosevelt Hotel in the day. Guests mingled during cocktails, bidding on a super silent auction and checking their seats in the VIP theatre setting prior to the viewing of the show on the big screen. Behind the main screen in the main theatre was the VIP Green Room Lounge—sleek, banquet-style seating at bistro cocktail tables, and a heavy and delicious buffet. In the VIP Lounge, my friend Jackson Brown informed me that his first appearance on stage was here at the Belcourt Theatre when he was in a tap-dancing recital at age five. Jackson went on to tell me he performed with a pair of twins, and he learned never to perform with twins for they are what folks look at. Not to be shown up, the lovely starlet on Jackson’s arm, Tish, chimed in, telling me that she made her stage debut on the same stage, only a few years after Jackson. Lordy, lordy. Oh, I almost forgot to mention that Tish was Mother Goose. When interviewing superstar Bette Midler I asked how she was preparing for her part of the evening, and she looked up at me with a somewhat surprised look and said, “Silly man, I keep calm and be divine!” Others being nothing but divine at this annual red-carpet event were Megan and Bruce Barry, Stephanie Moore, co-star Vincent Dreffs, leading lady Sonata with hubby Randy Rayburn (Randy received the 2014 Papa Joe Lightman Award), Paul Kuhn, Natasha Corcoran with Jeff Nunnally, Dawn Mangrum with leading man Chase Cole, and nominated best couple of the year Stacey and Taylor Rhodes. 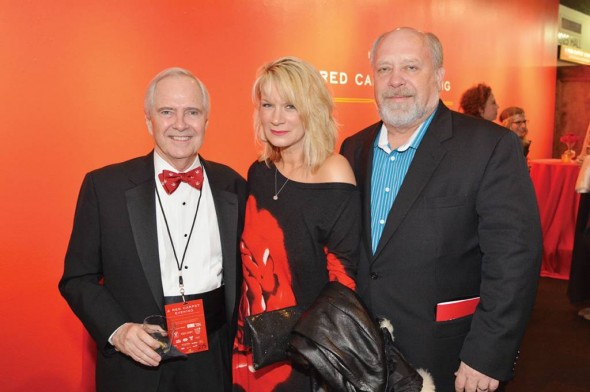 Speaking of celebrated films, the 1989 movie Road House starring Patrick Swayze came to mind recently as I was visiting what The New York Times has recognized as the #1 American dive bar here in Nashville—Santa’s Pub. My buddy Steffon Hamulak sort of bet me I would never set foot in such a place. Well, did I prove him wrong! Out and about on a Tuesday evening last month, my nephew Will Clayton and his buddy Hunt Baker (my bodyguards, lol) and I did make an appearance at the Pub for the performance of the punk band Bloody Drug Shenanigans. The interior had that sort of cozy dive feel to it, with a lot of Santa. No cover charge, little food, lots of Bud, and karaoke nightly, cash only. OK, I admit I did not see a lot of my regular A-Plus socials, nor the valet parking guys from PMC, but all in all Santa’s Pub was an adventure like no other I have had in a long while. It did get me out of my social comfort zone, and, as we all realize, art comes in many forms! P.S., Santa’s is open seven nights a week, 3 p.m. till 3 a.m. What a great after party after the ball this year: “Swans with Santa!” 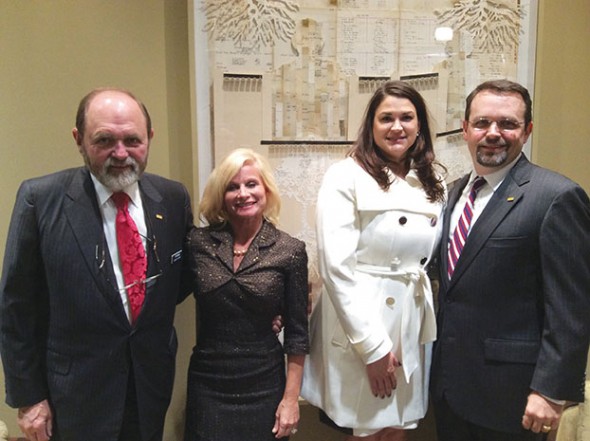 Have you ever just wanted to stop midway on Abbott Martin Road in Green Hills, put the car in park, and have someone else take it? Well, that was the scenario for the Grand Opening of First Bank’s Green Hills Branch. Janet and Jim Ayers were the host couple of the evening, showing left to right, upside down, and all around the wonderful Tennessee art that is housed in this branch office. There is one large piece that is framed in a Lucite shadowbox effect that houses archival prints of original bank ledger sheets from 1916–1947, images referencing the function and philosophy of banking from the early twentieth century into the beginning of the contemporary era. This piece of art is from one of the first banks in West Tennessee that Jim acquired. From custom chandeliers to photographs of the original Green Hills, First Bank is most entertaining and educational. Bank president Chris Holmes with his lovely wife, Susan, were on hand welcoming Betty and Winfield Dunn, Brenda and Ronald Corbin, Nancy and Billy Ray Hearn, Debbie and Bill Tate, Nashville’s Art Icon Anne Brown, Lew Connor, Colleen and Ted Welch, Joyce and Steve Wood, Rachel and Gary Odom, Joyce and David Hitt, Kristy and Jon Ayers, and Susan and Luke Simons. Now, as you most likely have guessed, this was not your normal bank branch office opening. There were no balloons, no hot dogs with Coke, no noise makers, no bank-giveaway pins and paper clips, but a marvelous buffet with tenderloin, full cocktail bars, a musical trio, great art, a pop-up living room under tent, and lovely gift-wrapped boxes of cookies as favors. I did feel somewhat guilty for not having a First Bank account, but I took care of that the day of the event. I must say, leaving the bank after opening my account I left empty handed—no toaster. Now that is showing my age! First Bank is my bank, and it rocks! (Way too much Santa’s Pub.) 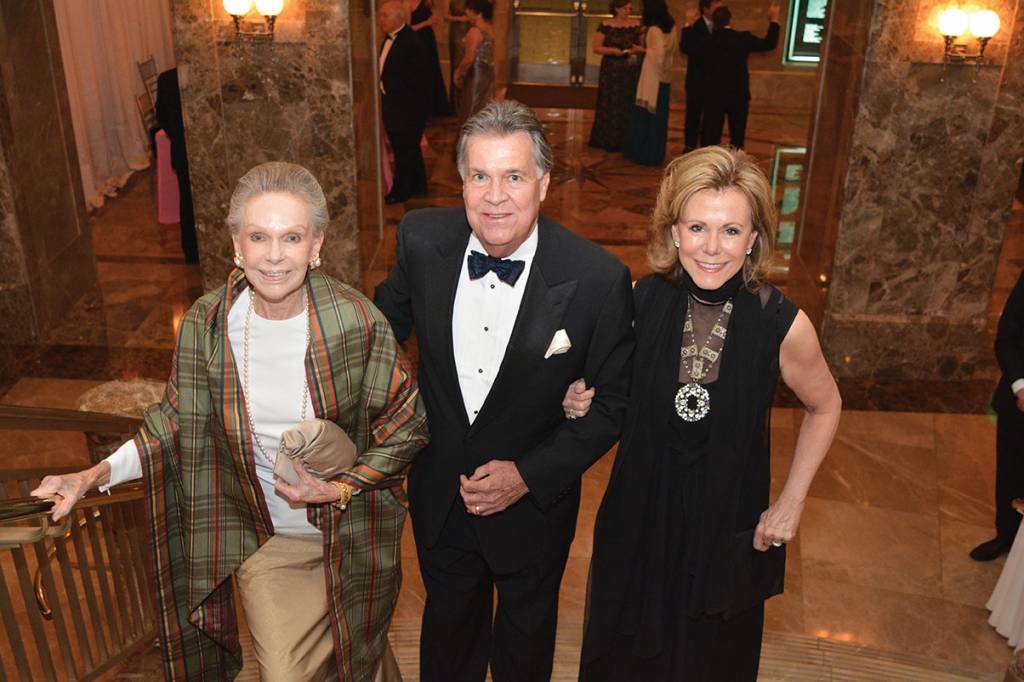 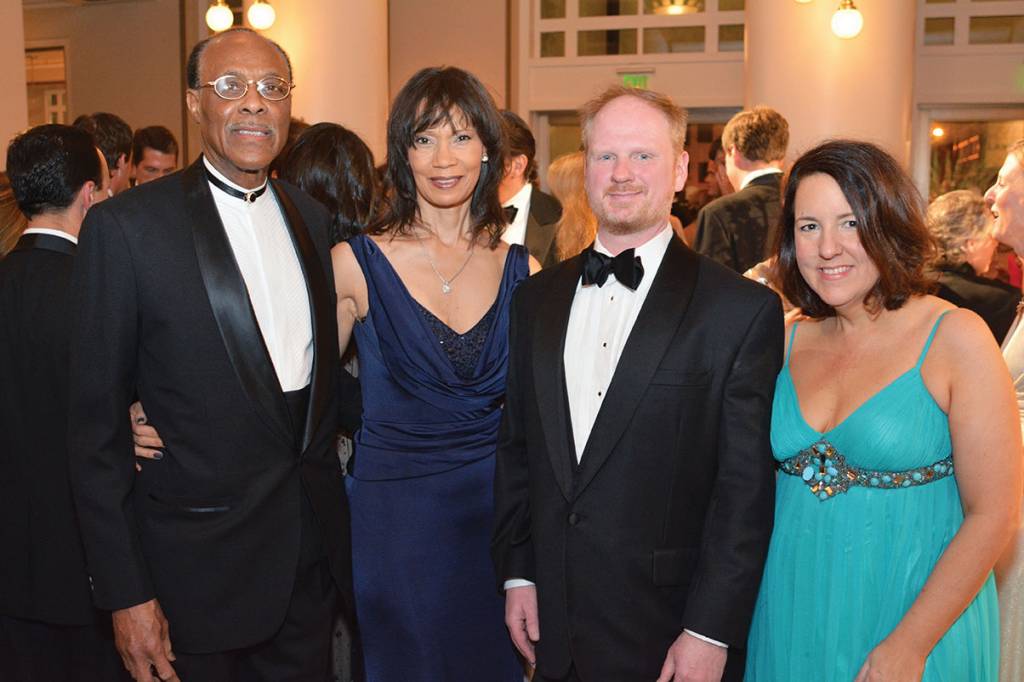 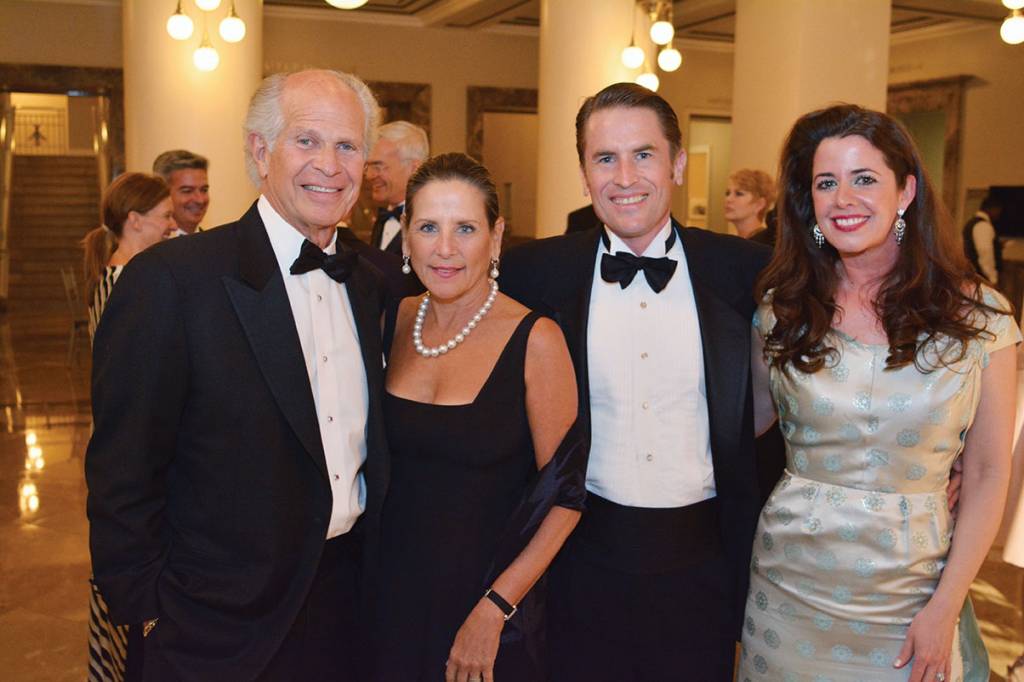 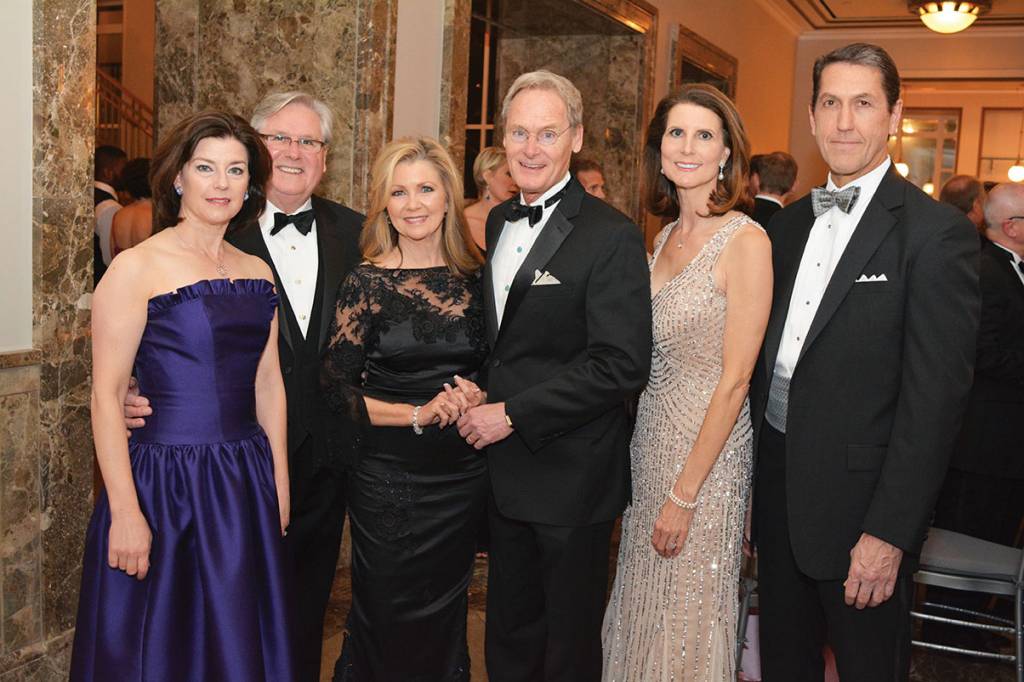 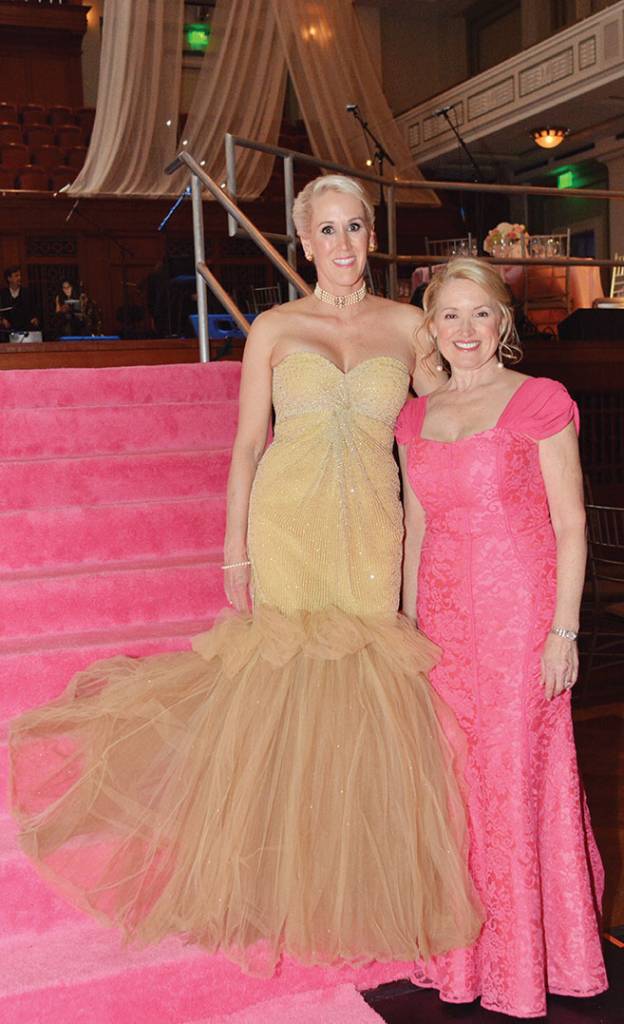 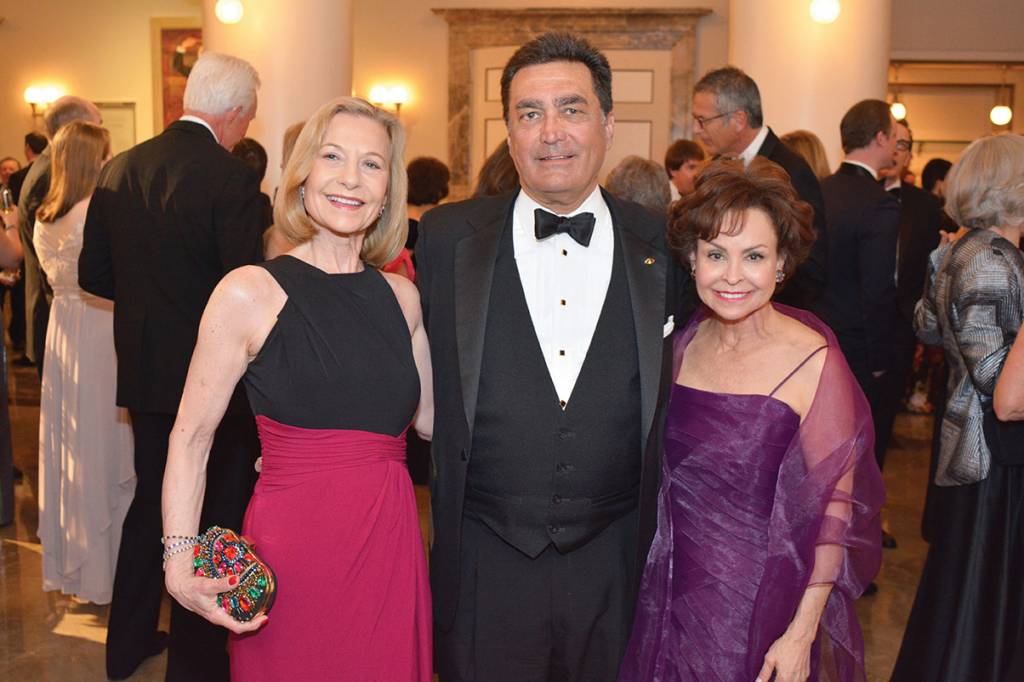 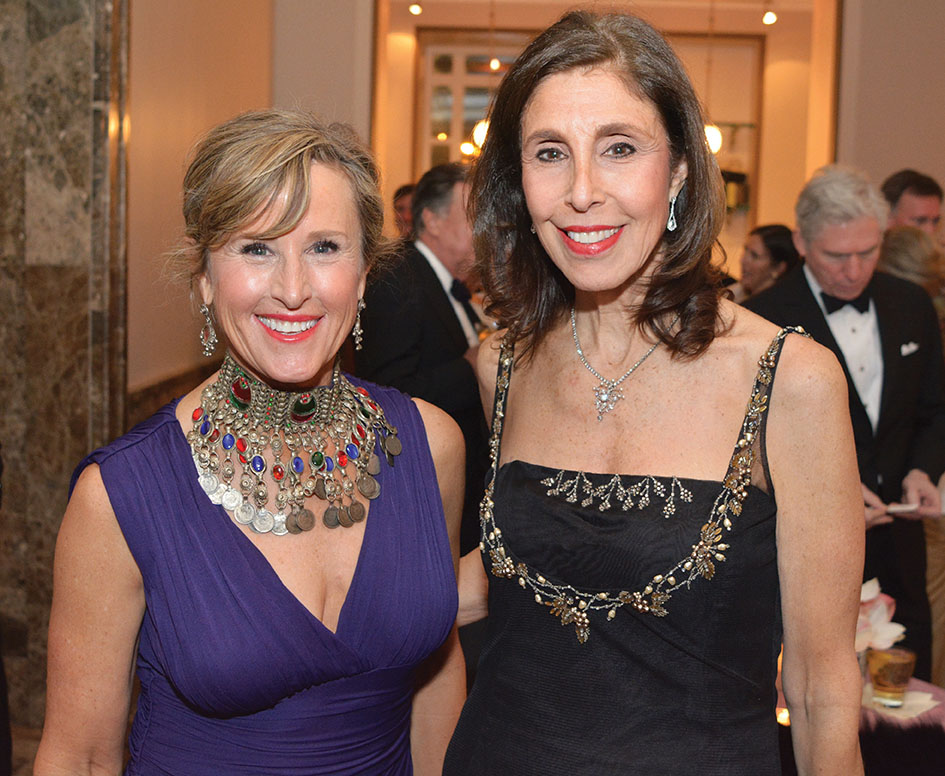 Pretty in pink was the Laura Turner Hall for the celebration of the 25th Ballet Ball. Co-chair Sarah Reisner told me that she and Suann Davis were a great pair to chair the 25th Anniversary Ball for they both love beauty and classical design, both in entertaining and in life. Beauty and a class act these two women achieved, in pink. Yes, pink it was. With a high-tech play of lighting, the hall looked as though it had been wrapped in a soft-pink, lace overlay—truly a beauty. Pink carpet ran the length of the hall with pale-pink tablecloths and pink-and-white floral arrangements by the Tulip Tree. It just had the feeling of a graceful ballerina, and ballerinas were abundant, performing as patrons entered the hall to be seated for dinner and again after.

The highlight of the evening was the performance by Kellie Pickler, followed by the marvelous sounds of the Pat Patrick Band. You just cannot beat a Pat Patrick evening! Honorary Chairman Ronnie Scott with his lovely wife, Elaina, welcomed patrons including many of the former Ballet Ball chairs. Elizabeth Nichols whispered to me that she felt so nostalgic this evening for she and Clare Armistead organized the first Ball Gala twenty-five years ago. Speaking of the first ball, which at the time was known as the Masked Ball, another talented designer and I designed the decor at the Vanderbilt Plaza. I shall never forget Clare telling me how important it is to see the guests sitting across the table, so she wanted and received a low bowl of roses as table decor that year. Joining Ronnie, Elizabeth and Clare, Sarah and Suann were past chairs Dallas Wilt, Amy Joyner, Lucie Carroll and Jacqueline Hutton, Kindy Hensler, Mary Jo Shankle, Jay Joyner, Susan Short Jones, Donnie Nichols, Patsy Weigel, Meredith Weigel and Ashley Henry, Nancy Cheadle and Sandra Lipman, Emily Noel, Melanie Baker, Rene Ward, Julie Boehm and Marsha Blackburn, Laurie Eskind and Elizabeth Greer, and many more of the Social A-Plus Crowd. I must say all the ladies and gents were beautiful and handsome. There is one patron that never lets me down: Nichole Huseby. Nichole finds the most wonderful vintage gowns, and she did again for this ball. Her Ballet Ball gown was an off-the-shoulder, aqua-blue brocaded gown that she told me that her Fairy Godmother Maggie O’Neill recreated for her.

When one thinks of a ballerina and ballet, graceful and classical beauty comes to mind, and that’s exactly what Ballet Ball 2014 was indeed!

Anticipating spring sometime in 2014, I wandered out to the Nashville Fairgrounds to the Lawn & Garden Show, where Wine and Roses was the theme this year. Wine a-flowing, flowers a-blooming, fountains a-flowing—a great treat on a cold and damp

Nashville weekend. Thanks to Deb Varallo, Randall Lantz, Sharon Eden, and Tammy Algood, I had myself a great time and was so pleased to run into my landscape professor from the old days at O’More College, Duncan Callicott. He still shudders when he sees me!

Happy Spring to All!