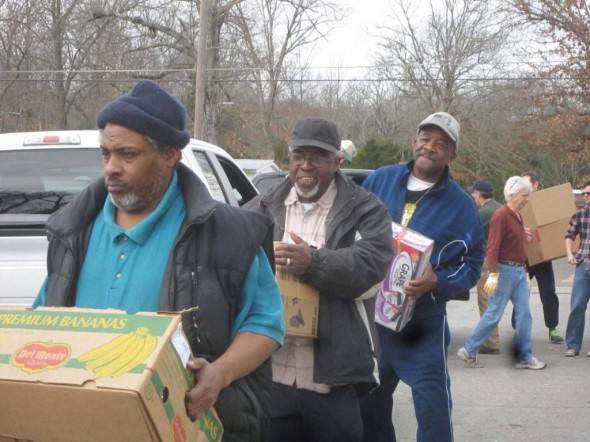 There’s an epidemic of starvation going on. And it’s right in our backyard.

From Zac Adams comes Hunger in America, a film that pushes past amber waves of grain to uncover the hidden meal crisis happening in one of the wealthiest countries on the planet. Narrated by James Denton and produced by Nashville’s Skydive Films, the documentary is more than just a public service announcement: it’s an exposé of one of America’s biggest secrets.

In the wake of the Great Recession, many hard-working Americans felt the pinch of hardship tighten into a vice-like grasp around their lives. Showing how one-sixth of the nation’s population now struggle with poverty-related food issues, the story changes from state to state to show the same picture: millions of people silently suffering because of unemployment, misconception, and pride.

Deciding to fight back in the war on hunger, generous efforts such as Graceworks Ministries and “Pastor Bob’s Bridge Bunch” feed thousands every month, proving it possible for local kindness to solve a nationwide problem.

Given the scope of something like hunger, the documentary’s eclecticism will prove to be a dividing point for viewers. Certain elements—such as the duration of the film and its focal points—have potential to distance the viewer from the connection to those starving. But the elaborate character of such a problem would mean that much ground would have to be covered for the issue to be addressed properly. It is through the appreciation of this problem’s magnitude that audience members will respect the film for telling its story in under an hour.

There are many documentaries whose call to raise awareness does very little to impact the problem. Hunger in America is not one of those films. It is an admirable call to action.

Tickets can be purchased through the Belcourt Theatre. Visit www.bit.ly/1i8RW5c.

Justin Stokes is the founder of the MTSU Film Guild, a student organization which functions as a production company for student filmmakers. He is a filmmaker, screenwriter, and social media manager, as well as the Operations Manager for The Murfreesboro Pulse.