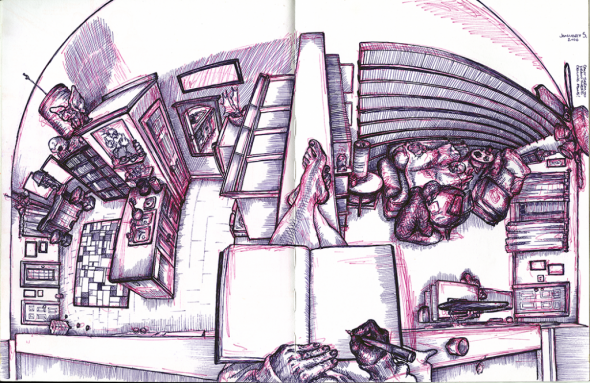 When someone looks at one of my pictures, they are only seeing a portion what I see. Whether I like it or not, I see the entire project: dozens of sketches, thumbnails, revisions, notes, late nights, pots of coffee, meetings, emails and phone calls. All the frustration of hitting a wall, the joy of making a breakthrough, the exasperation of going through yet another revision, or the excitement of marking the project “complete” comes flooding back. In some cases, I find the process-work to be more interesting than the finished piece. I considered how it might be possible to present a more complete view of my work — and the work that goes into the work. This is what I hope to achieve with “Rather Sketchy” at the June Art Crawl, wherein I plan to exhibit a selection of my illustrations along with all of the sketches and process-work associated with them and a couple of sketchbooks, which contain preliminary project sketches as well as everything I draw in my downtime. Basically, “Rather Sketchy” will showcase everything that isn’t intended to be shown. 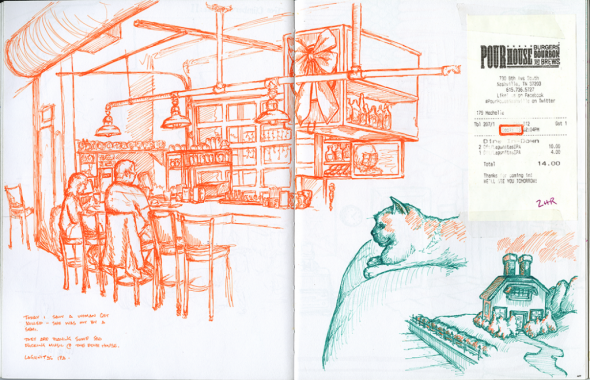 I’m pretty nervous. I’ve only ever exhibited clean, finished work — polished and prepared for public consumption. There’s a distinct vulnerability (dare I say terror) that comes with the notion of offering up my sketchbooks for anyone to flip through. I’ve always loved seeing the sketchbooks of others. Sketchbooks are an arena of complete freedom, uninhibited by the demands of clients, the neurosis of the artist’s perfectionism, the fear of judgment. They are the most direct window into the mind of an artist. Only very recently have I entertained the idea of exhibiting my sketchbooks; their contents were drawn under the assumption of privacy. I wonder if I’m making a huge mistake.

My creative process typically goes as follows: thumbnails of various ideas/compositions, a couple of rough sketches developing upon the best thumbnail, a tight sketch developing upon the best rough sketch, color tests, a long series of revisions/notes/bouts of panic, then I start on the final. I find it interesting to look back at how a piece evolves as it is developed and to consider how one slight change could have completely altered how it turned out. The other drawings in my sketchbooks — the downtime drawings — get none of this preliminary attention. After all that planning, refining, revising and redrawing, it is huge relief to just draw something without thinking too much. Sometimes I just draw whatever is in front of me — this can be thoroughly relaxing and meditative. I derive a lot of joy from drawing for the sake of drawing, to really study what I am looking at, as though it is the only thing in the world worth any attention for that moment. 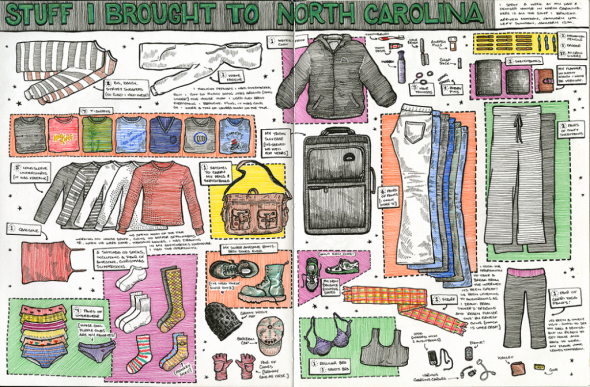 While the downtime sketchbook drawings and the illustration process-work are quite different, they all start in a sketchbook. There is something pure and inimitable in a lot of sketchbook work that can easily be lost in the journey to a finished illustration. It is an aim of mine to preserve the purity of the sketch in my future work.

My goal is to show those who come out to see “Rather Sketchy” an honest, intimate view of what I’ve been doing for the last couple of years with the hope that it is interesting. I wish to present a completely comprehensive view of each project, and this is possible because I never throw any of this stuff away. 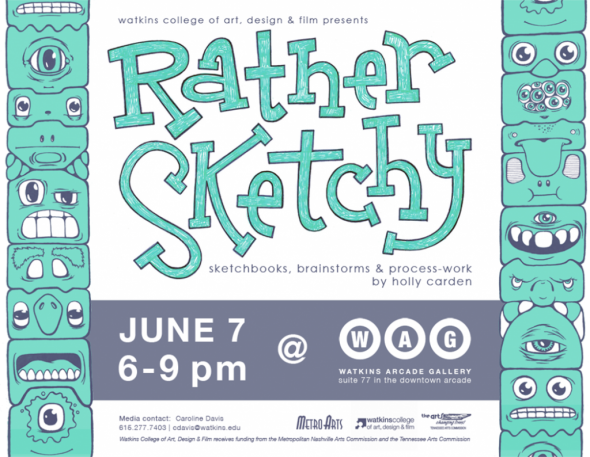 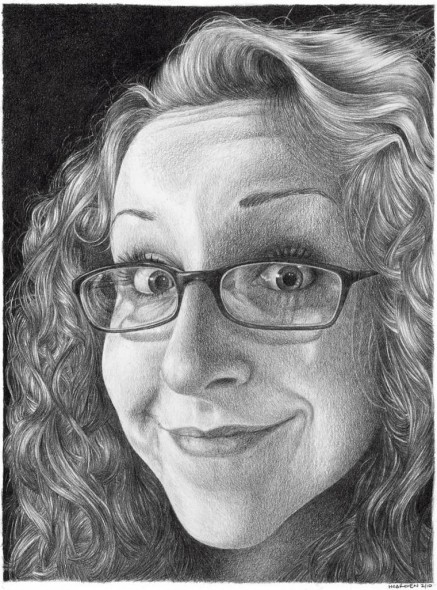 Holly Carden is an illustrator and a senior in the Graphic Design program at Watkins College of Art, Design & Film. Born and raised in the United Kingdom on the illustrated books of Roald Dahl and Jill Barklem, Holly has always loved drawing, specializing in dense, high-detail pictures. Her work, spanning a wide variety of styles and mediums, has won multiple awards including the Robb Swaney Prize for Excellence and a National American Advertising Federation Award (ADDY). Holly can often be spotted drawing the people and places of the Nashville area in her sketchbook, inspired by being part of such a fun and creative city.