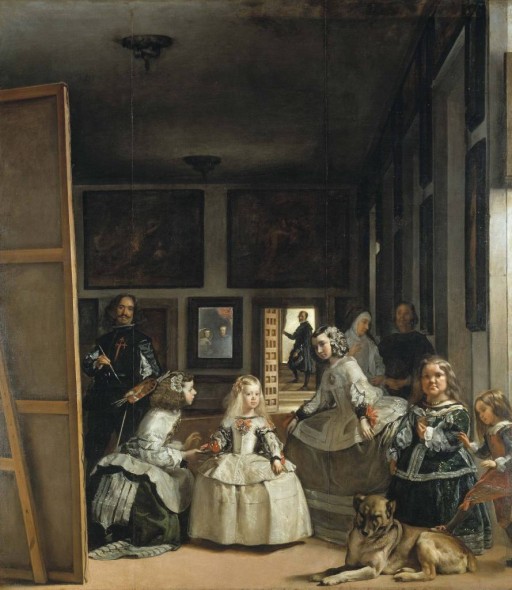 If you are in Madrid, be sure to visit the Prado Museum. It houses one of the world’s most revered collections. Moreover, several iconic works of art found there never travel. Among them is Las Meninas (The Maids of Honor), 1656, by the leading Spanish artist of the seventeenth century, Diego Velázquez. The painting, impressive on every level from its monumental size and the skillful application of paint to its composition, complexity, and enigmatic meaning, has inspired and intrigued artists and scholars for centuries.

The setting is Velázquez’s studio. The central figure in the painting is the Infanta Margaret Theresa, daughter of King Philip IV and Queen Mariana. She is not facing the artist but rather gazing in our direction. The painting depicts a moment in time, a snapshot made almost two hundred years before the invention of photography. The painting’s title refers not to the Infanta but to her maids, who serve the royal family just as the painter Velázquez did. The figure on the steps at the door in the background has been identified as Don José Nieto Velázquez, the queen’s chamberlain. We cannot know if he is entering or leaving. A reflection of the King and Queen appears in a mirror on the back wall. Where are they standing? Are they the models for Velázquez’s painting or are they, like us, looking at the Infanta, her entourage, and the artist at his easel?

Velázquez guides the viewer through the canvas compositional techniques, including classical perspective and dramatic light. Notice the paintings within the painting or rectangles within the rectangular picture frame. The artist would have seen similar organizational tropes in Dutch paintings in the royal collection. The artist includes a portrait of himself surrounded by references to painting: canvas, easel, palette, paintbrush, and finished pictures on the adjacent walls. When Las Meninas was made, a painting was seen as a window onto reality rather than as a vehicle for commenting on the conventions of painting or the role of the spectator. In this regard, Las Meninas is a modern painting, one of the first to be self-referential rather than solely about the obvious subject. It is also classical by virtue of Velázquez’s virtuosity and discipline. Las Meninas is an infinitely fascinating painting that holds up in reproduction or online. However, by standing before the painting at the Prado, you see firsthand the tactile quality of the paint, the intricate play of light, and the full measure of Velázquez’s genius.