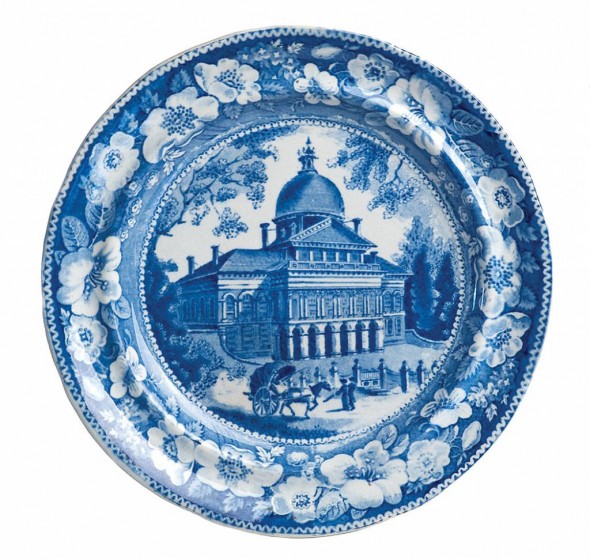 It is said that looks can be deceiving, and that is true of this simple-enough-looking commemorative plate. The irony of this English dinner plate is in its production history, which began only a few years after a war between the country of the plate’s origin and the land that it commemorates.

The conflict was the War of 1812, Americans fighting against the British, Canadian colonists, and the Native American nations. Among the causes of the war were Britain’s attempts to restrict the U.S. from international trade, the Royal Navy’s impressment, recruitment by force, of American seamen, and the lack of shared interest in American expansionist visions. During the course of the War of 1812, the U.S. suffered many costly defeats, including the 1814 British march into Washington, D.C., resulting in the burning of the capitol building and the White House.

Following the conflict, the English potters of the Staffordshire district, having suffered great business losses during the many years of being under embargoes, needed to get back into the good graces of their best customers, the Americans. In an attempt to capitalize on the Americans’ nationalistic spirit, they began production of ironstone ceramics decorated with transfer prints featuring American victories and national heroes, such as Jefferson, Washington, and Franklin. The potters of Staffordshire were successful with the innovation of this now-termed “Historic Staffordshire.” It was produced in all forms of dinner services, tea sets, and tableware and was durable, mass-produced, and reasonably priced. It remained popular with the American consumer from approximately 1819 to 1860 with its stirring patriotic images covering the entire surface of the ironstone form that it decorated. The dishware proved to be so popular that later more patterns were developed, patterns of famous American landmarks, scenic vistas, and themes.

This brings me back to the object of this appraisal, one ten-inch dinner plate depicting the Boston State House from the late nineteenth century. At least six pottery firms used this structure as a view, which represents the State House in 1804. The building was constructed in 1795.

Similar plates have achieved $250 to $300 at auction, and should you wish to collect this form of patriotic Americana, I would suggest that you follow auction houses that feature American furniture and decorative arts sales.