The Art That Whispers from the Alleyway

There is much to love about Donna Tartt’s Pulitzer Prize-winning novel, The Goldfinch. I especially love the character of Hobie, and the way he talks about art. There is a part, very late in the novel, when Hobie explains to Theo why it is he thinks Carel Fabritius’ painting, The Goldfinch, grabbed the young Theo the way it did.

“–if a painting really works down in your heart and changes the way you see, and think, and feel, you don’t think, ‘oh, I love this picture because it’s universal.’ ‘I love this painting because it speaks to all mankind.’ That’s not the reason anyone loves a piece of art. It’s a secret whisper from an alleyway. Psst, you. Hey kid. Yes you.”

Tartt, in a dismissal of the notion of the universal, has touched on the universal. We don’t fall in love with books and paintings and albums and movies because they are somehow exemplary of the form. We fall in love because they speak to us. My sister once said to me–during a period of my life that was rather convoluted emotionally–that I didn’t have to marry a woman just because she gave me a glass of water. Wise advice when you’re parched. You can, though, give yourself entirely to a song the first time it speaks to you through your speakers. Or a painting when it spies you from across the gallery. Or a movie projected only toward you in a theatre. You don’t have to feel guilty about the film you were with earlier in the week, either. Or the book that’s still on your nightstand from the night before. 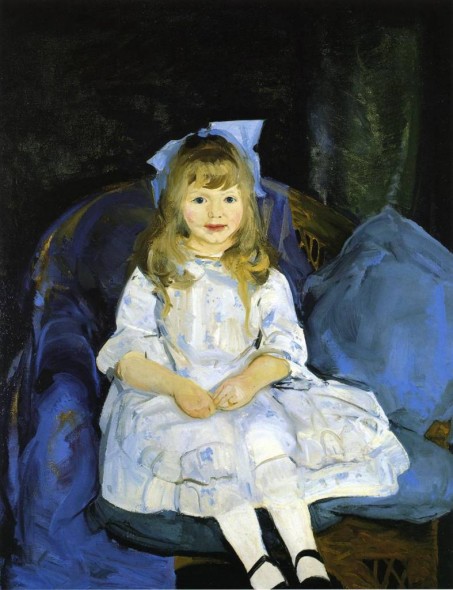 Tarrt’s words, via Hobie, made me think about paintings that had that same effect on me, that said, “Psst, you. Yes, You.” The painting I thought of first was George Bellow’s “Portrait of Anne.” I first met it at the High Museum of Art in Atlanta the early 90s. I’m not sure what drew me to it initially other than it being adorable. Bellows was a master of light and texture, and the portrait, done later in his career and years after his success as a gritty urban realist, is an excellent example of his technique. Anne sits on wicker chair draped with a blue fabric, her skin soft and pale and dress a bright white. Her golden hair is tied up in a light blue bow that repeats the color of the fabric. She looks like a porcelain doll. I loved the painting and her immediately. I wanted to be her father, asking her to help me with my craft, when she’d much rather be out playing with her friends or getting lost in storybooks. I learned later that Bellows used to pay Anne to sit for him, twenty-five cents an hour, which made the painting even more adorable to me. Her face took on a new dimension with this revelation, a cross between “I know I’m cute” and “Are you done yet? You’re going to have to pay me another quarter any minute now.”

I bought a print of the painting at the High’s Museum’s store and took it back to New Jersey. I lived with my father then, and hung it in our dining room. We didn’t get along very well during this period, and I looked forward to the day I had the means to live on my own. When I finally did, I packed up all my belongings, and on the day I was to move, went to take the picture down. My father stopped me. “Are you taking the picture?” he asked me. “Why?” I wanted to know. “Do you want it?” He did. He liked it, he said. In all the time we shared together in the apartment while the print hung in the dining room, we never discussed it. He never asked me about it or where I got it. He didn’t know that Bellows paid his daughter twenty-five cents to sit for him. And yet, like I was initially, he was drawn to it. It spoke to him.

And so I left it for him. Maybe it reminded him of his daughter, my sister, when she was younger. Maybe all those nights when he was sitting alone in the living room, smoking cigarettes and watching television, he was glancing over into the dining room and drawing some comfort from Anne’s cautious smile. I won’t ever know why he liked it, because even though our relationship improved before he died in 2007, we never talked about it. We didn’t really need to.

Sometimes, as Tartt suggests, it’s “a secret whisper,” from an alleyway, around a gallery corner, or from the dining room. I understood that.

How about you? What painting has spoken to you? Share your story in the comments section below.