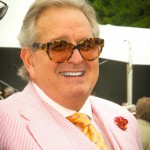 Upon entering the Cheekwood Mansion the other evening my thoughts were on Bryant Fleming, the original landscape architect for Cheekwood as well as many of Nashville’s finest homes and gardens. In fact, he was the architect of my childhood home built in 1930 on the bluffs of Richland Creek. The reason for my visit that evening was what has become the most sought after garden party invite to date, Howe Wild. The Howe Garden at Cheekwood is one of many; this garden was moved and renovated at Cheekwood by the Garden Club of Nashville a few years back. 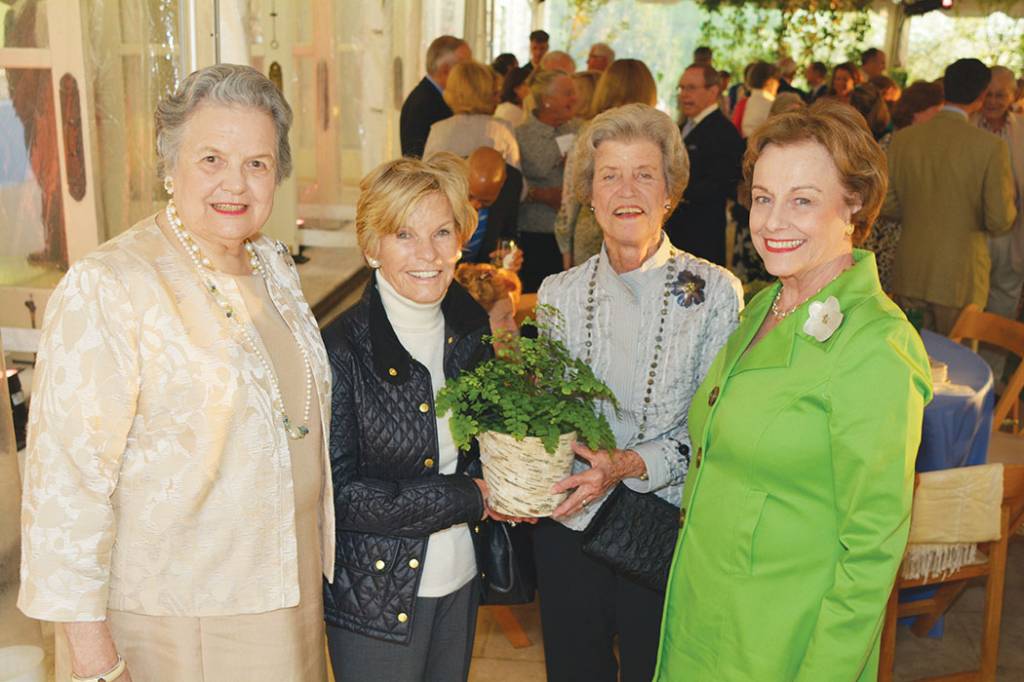 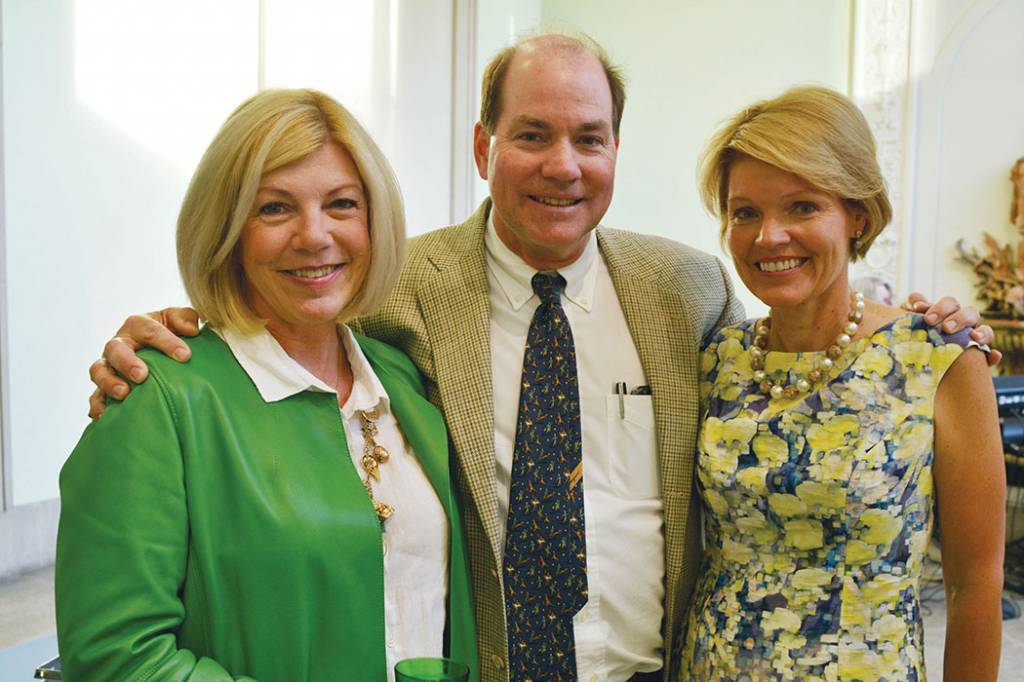 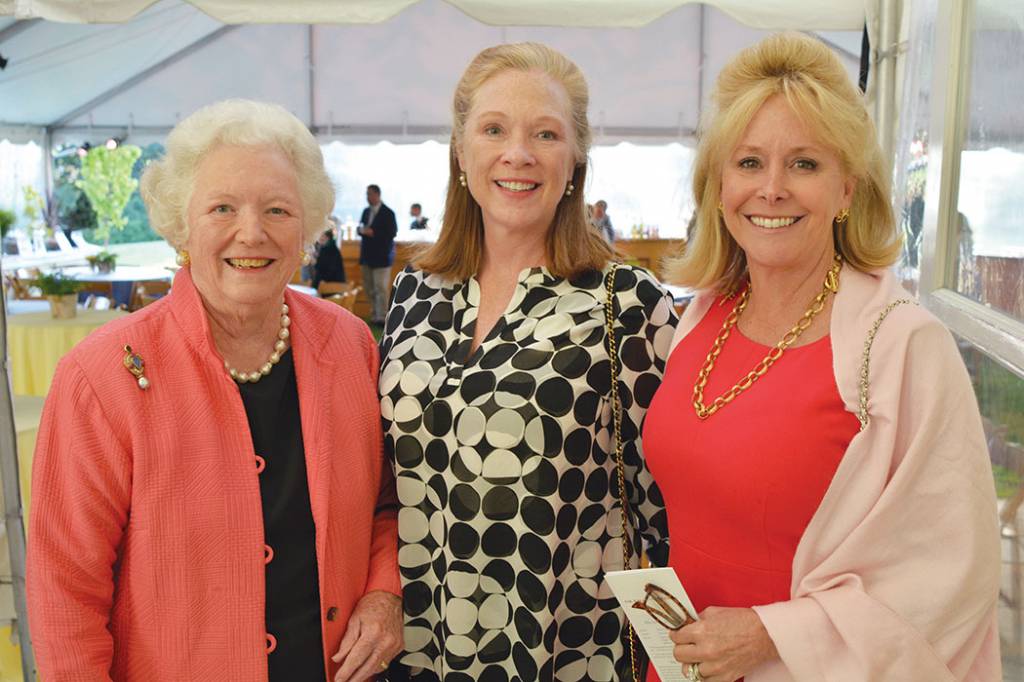 OK, this was not your free-hotdog-and-Coke kind of plant auction, but one of pearls and diamonds and well-dressed gents agreeing with their social wives that yes, that Acer palmatum (coral bark maple) would look great at the end of the boxwood garden. There was not a garden tool, gardening glove, or wheelbarrow in sight as event chairs Anne Nesbitt and sister-in-law Elizabeth Wallace along with Garden Club of Nashville President Cayce McAlister greeted Nashville’s finest gardeners, Dudley White, Anne Parsons, Alice Hooker, Hilda and Jim McGregor, Peggy and John Warner, Agneta and Brownlee Currey, Margaret Ann Robinson, Betty and Jim Stadler, Lisa and John Campbell, Frannie and Buddy Jackson, Kitty Murphree, Tooty Bradford with John Eddie Cain, Lin and Bill Andrews, Carole Nelson, Archie Oman, Clare and Tara Armistead, Lise Bohannon . . . you know, the A Plus Plus Plus garden set. No, I went home empty handed, for they did not have any sweet potato vines, LOL. 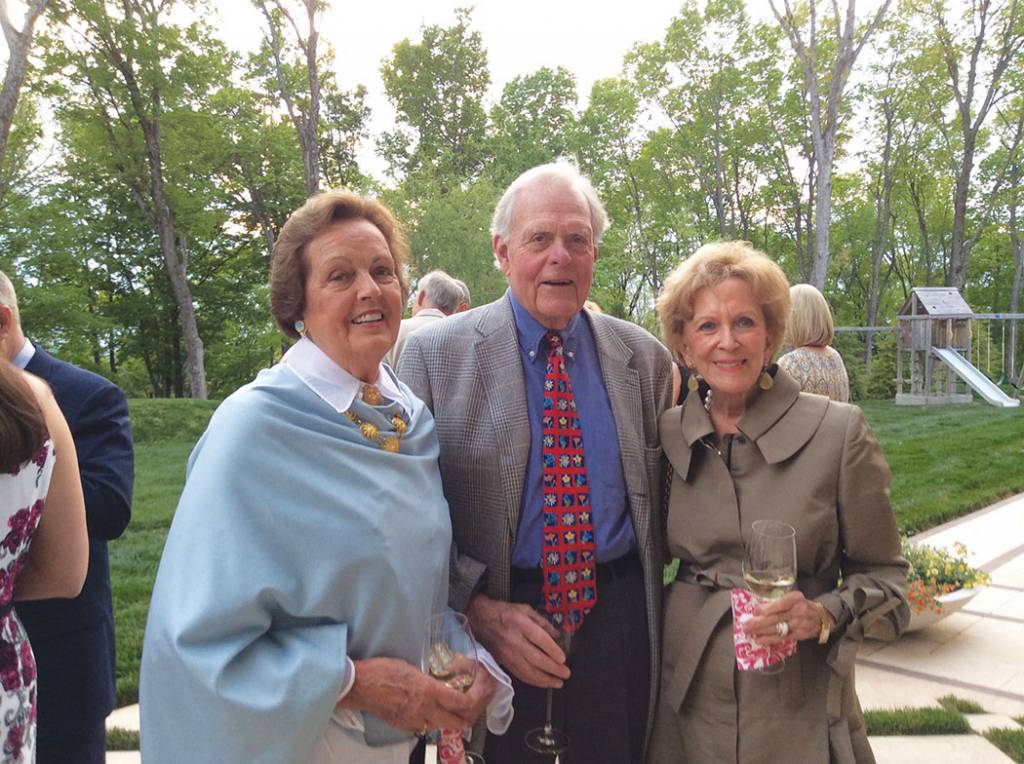 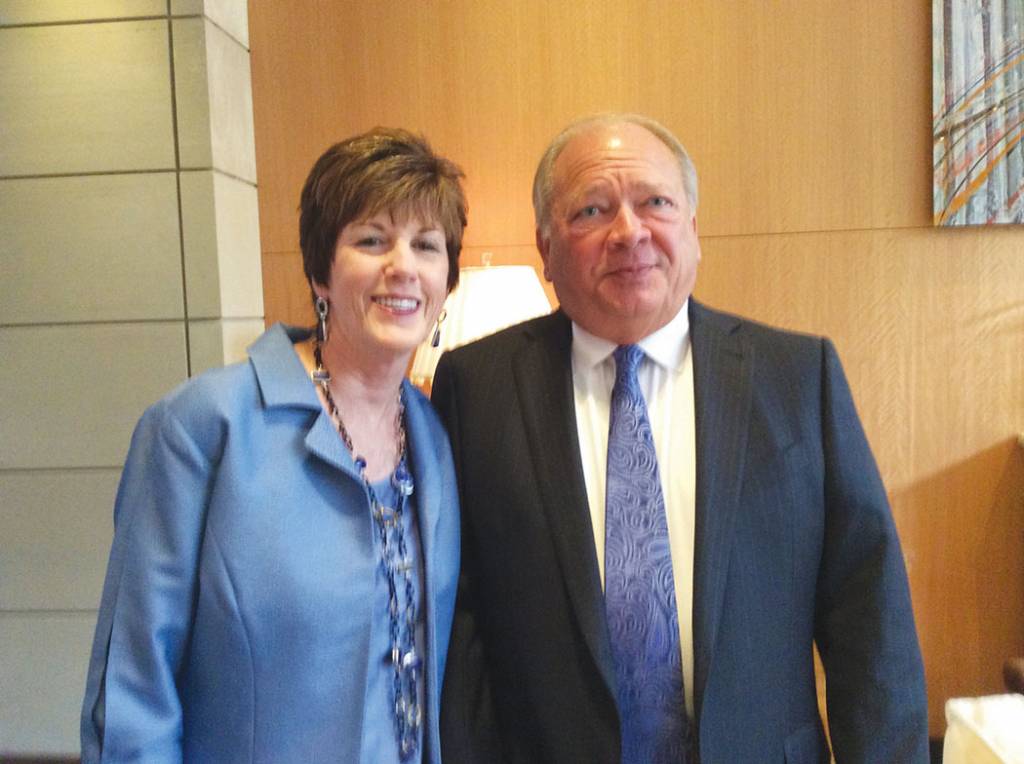 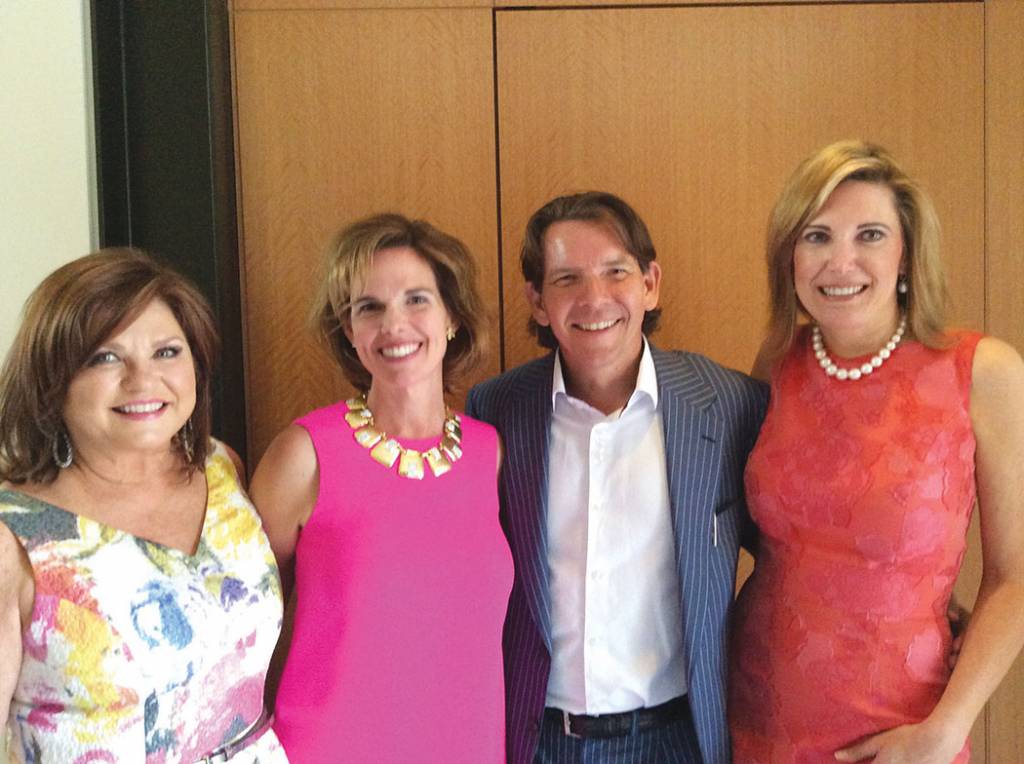 Speaking of homes and gardens, I had the privilege of visiting a masterpiece of a home high up in the hills of Williamson County. Patti and Brian Smallwood hosted the Patrons Party Cocktail Supper for the Symphony Spring Fashion Show. Now, this stately manor is unbelievable with two swimming pools, one a lap pool inside off the master suite. Joining the Smallwoods in greeting the patrons were this year’s Symphony Fashion Show Chairs Vicki Horne and Dara Russell. Patrons, most all fashion icons themselves, included Patricia and Rodes Hart, Nancy and Billy Ray Hearn (Nancy was busy telling me about her keeping closet, where she stores her formal gowns from season to season), Judy and Tom Foster, Gayle and Bob Patterson, Alberta and Bob Doochin, Sandra and Larry Lipman, Mary and Alex Wade with daughter DeeDee, Johnna Ford, and Anne and Joe Russell.

As I mentioned, this home is high on a mighty high hill. As I drove for what seemed like miles on the one-way, black-asphalt driveway I came upon yet another set of gates, where the black asphalt turned to white concrete. Well, I just knew I had arrived at the pearly gates by car, but then one had to drive a few more miles to reach the heavenly residence. I arrived at the same time as our Symphony Godmother, Martha Ingram, and Gil Merritt arrived. As we entered the home, Patti exclaimed, “Aunt Martha, Aunt Martha it is so good to have you here!” A few moments went by, and I just could not stop myself as I embraced Patti and said, “Cousin Teddy is here also!” If one is to pick a family to be related to, I think this is a fine family to claim! 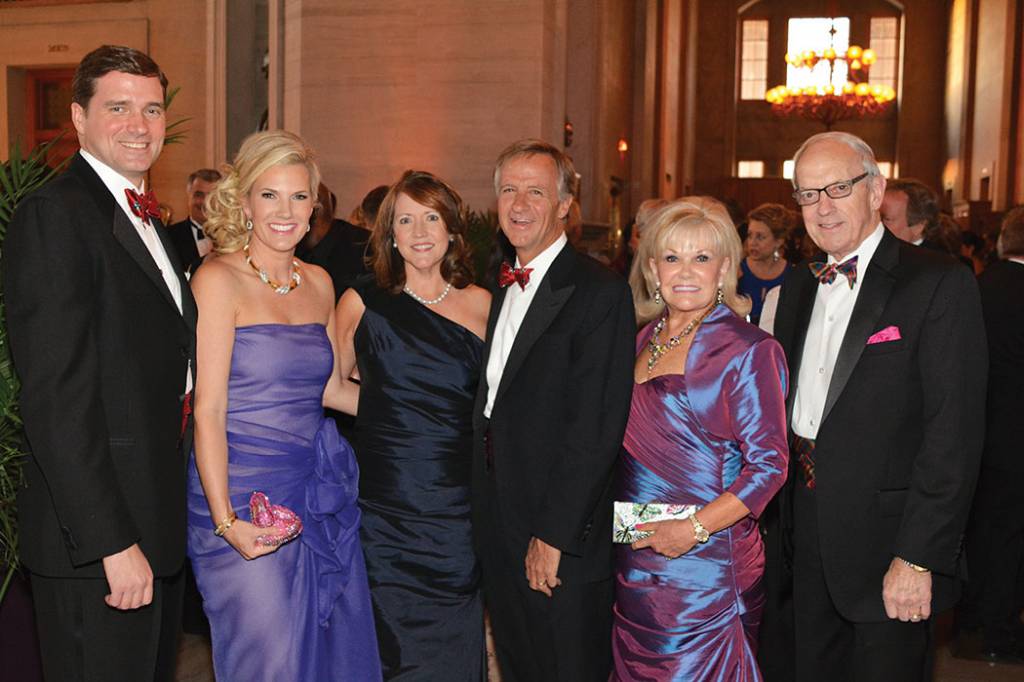 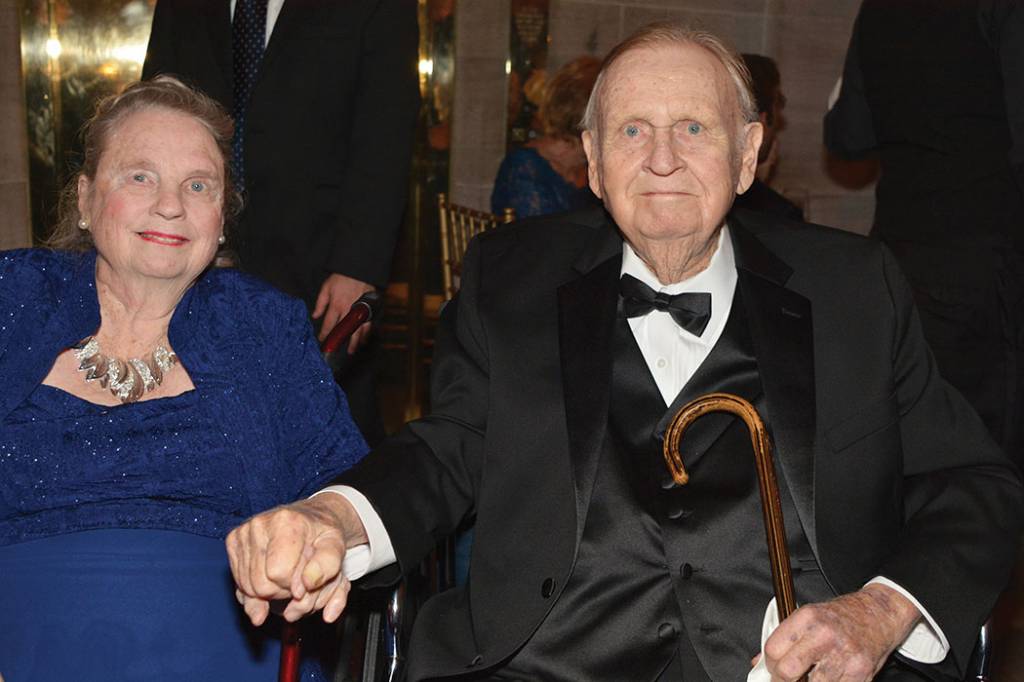 Suzanne and Grant Smothers, sometimes thought to be Barbie and Ken, were dancin’ with their darlin’s at this year’s Tennessee Waltz. Co-chairing this event were Linda and Jere Ervin. Having cocktails followed by a seated, candlelit dinner is always a special evening at our State Capitol, but this year’s event had a feel of elegance and sophistication. Suzanne and Linda, being the gracious hostesses they are, added lovely flower arrangements everywhere one could see featuring irises, the State Flower. The impressive limestone staircase was lined with eight-foot gilded candelabras, making this the most beautiful of evenings at our Tennessee State Capitol.

Governor and Mrs. Haslam along with the Honoree of the evening Senator Douglas Henry welcomed Bishop David Choby, Father Dillon Barker, Sylvia and Al Ganier, former governors and first ladies Betty and Winfield Dunn and Martha and Don Sundquist. This event was a benefit for the Tennessee State Museum, and once again I thank Linda and Jere and Suzanne and Grant for this most stately evening. Oh, by the way, if you put former Mayor Bill Purcell next to Governor Bill Haslam they look as if they could be brothers. (I realize you always thought that.)

A few Saturday nights back, if one was in need of a physician one would have needed to be at the Omni Hotel at the 2014 Seton Celebration. This event honored the medical professionals and community leaders who have demonstrated excellence and a heartfelt commitment to the missions of Saint Thomas Hospitals. Co-chairs Burkley and Newton Allen and Mary Jo and Steve Shankle (I think Mary Jo has chaired every event in town this year!) were congratulating the evening honorees Dr. Michael J. Christie, Mr. and Mrs. James Clayton III, Dr. Cornelia R. Graves, and Mr. Doyle R. Rippee. Dancing the night away to the City Lights Orchestra were Rose and Doug Grandstaff, Carol and Bob McCorkle, Sally and Geoff Smallwood, Jody Mattison and Jordan Asher, and Monica and Daniel Scokin. Thankfully there was no need to ask the question, “Is there a doctor in the house?” 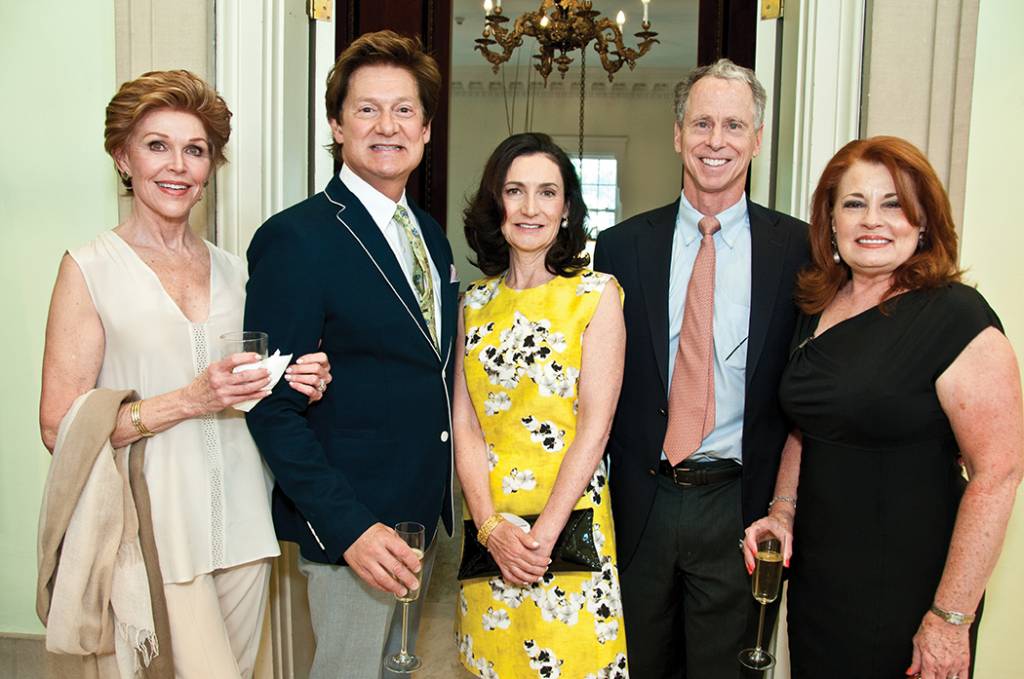 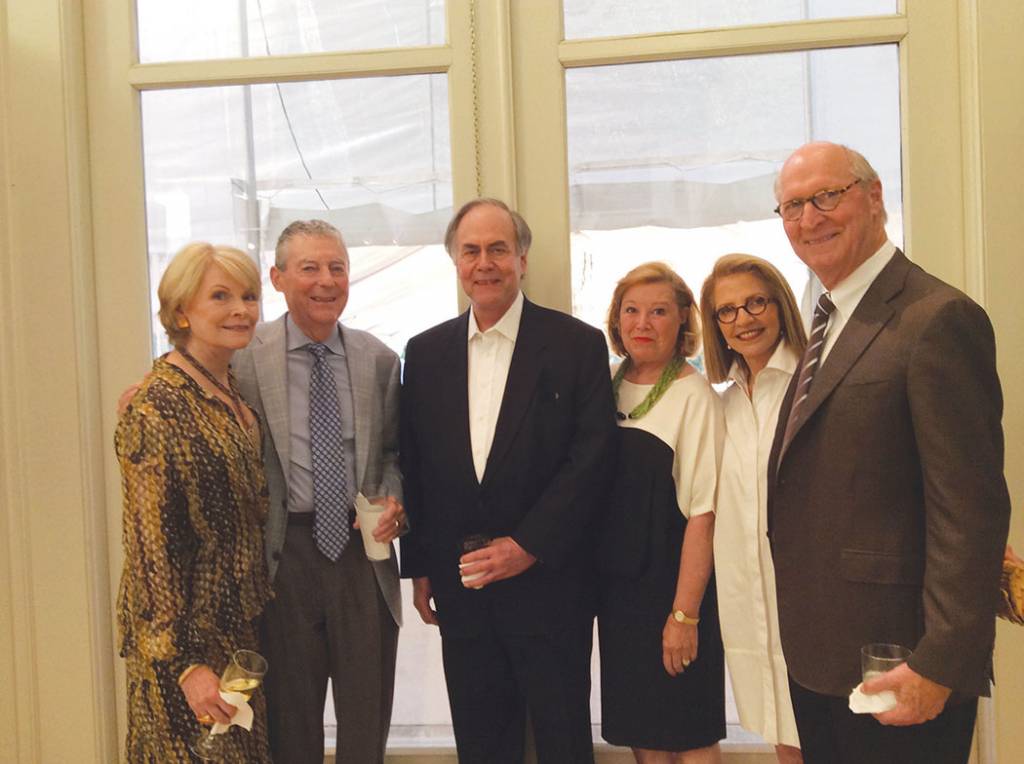 Lobster Thermidor was the first course of a most delightful dinner hosted by Joanne and Gary Haynes a few weeks ago at the Cheekwood Mansion. After the guests were seated in the elegant Georgian drawing room, Gary welcomed them all and remarked that having two galleries, one here in Nashville and the other in Maine, Lobster Thermidor would be most appropriate. Prior to dinner, cocktails were served on the Loggia where works of art from Haynes Galleries were displayed and selling! A wonderful dinner by d.Kates Catering was accompanied by the musical notes of Pat Patrick.

It was the artsy A Plus crowd—Joy and Landy Gardner, Sissy and Mark Simmons, Jennie and Rob McCabe, Lannie Neal, Renee and Walker Mathews, Sarah and Bob Buchanan, Judy and Pete Nebhut, Ellen Pryor and Paul Polycarpou, Susan and Luke Simons, and Betsy and Ridley Wills. Champagne was passed with dessert, which was my favorite, crème brûlée, chocolate decadence fresh cream, almond tuiles crowned with the Haynes Galleries eatable symbol. Now this is the way to entertain folks. I quote Gary once again: “Joanne loves to entertain here at Cheekwood. The only problem is that she wants a home of the same beauty and quality.” 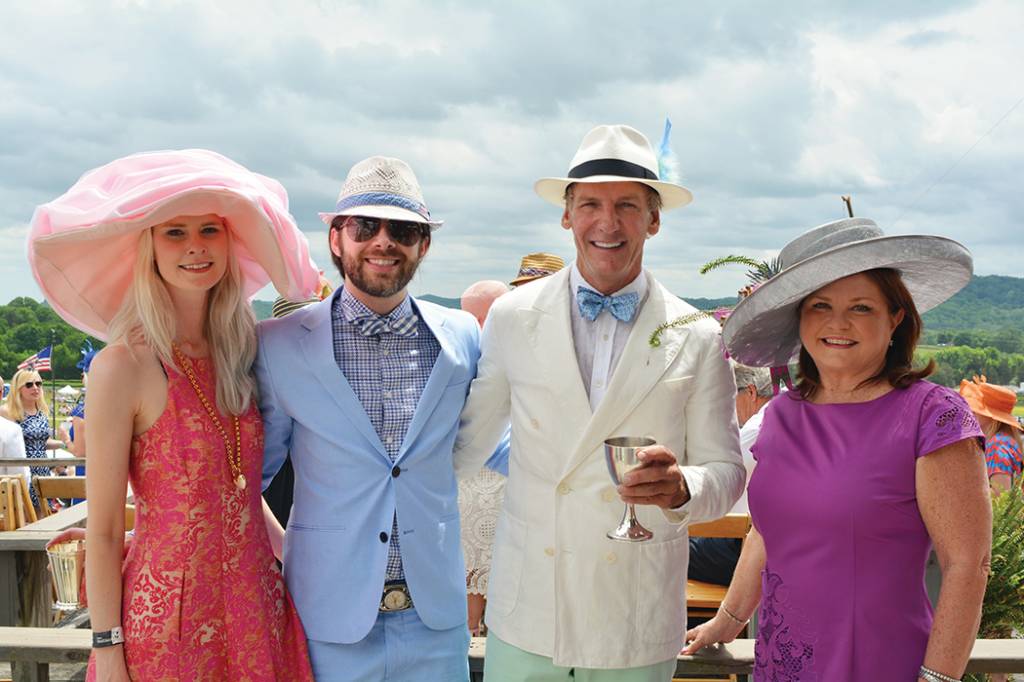 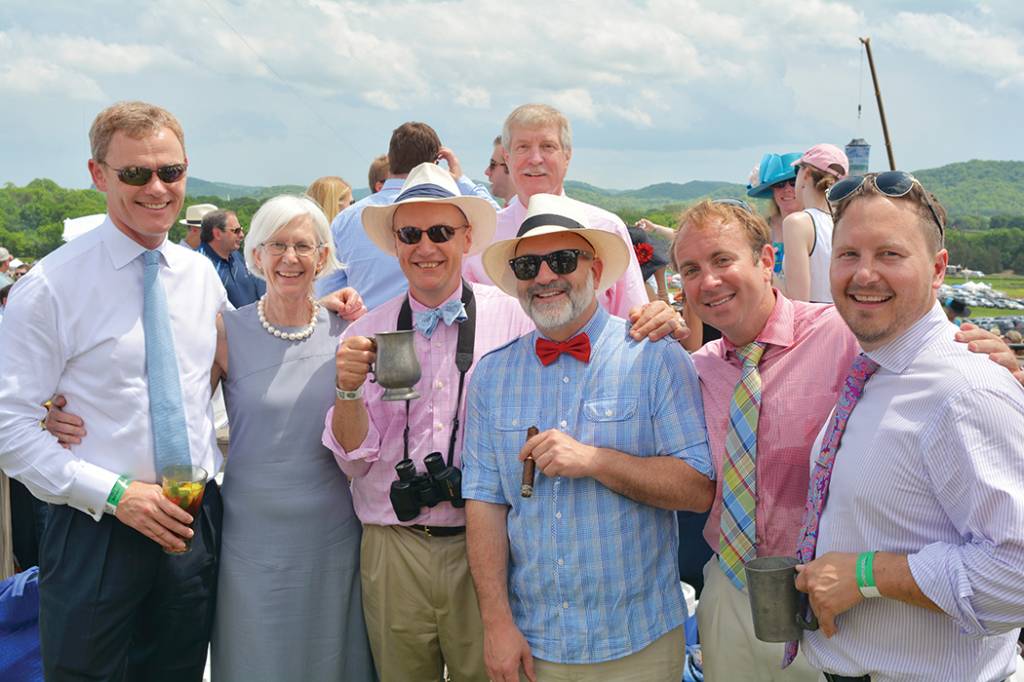 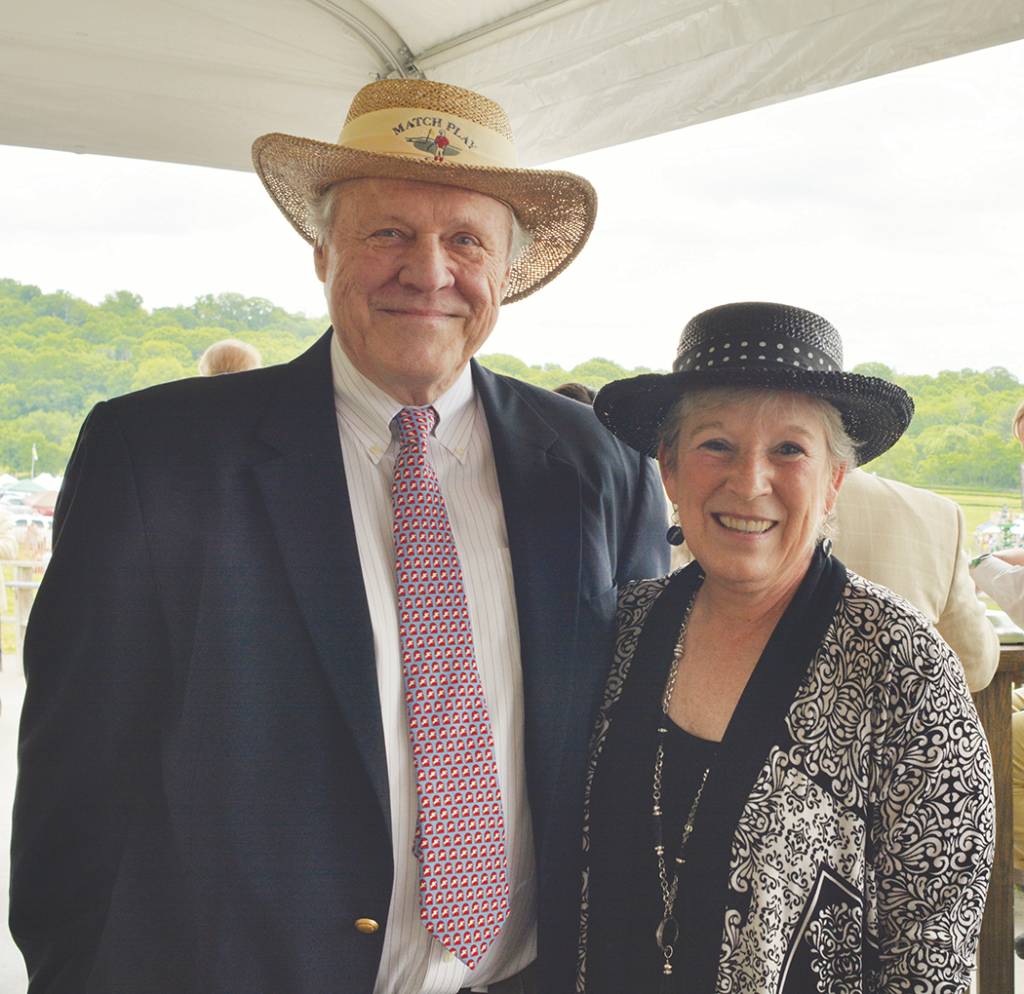 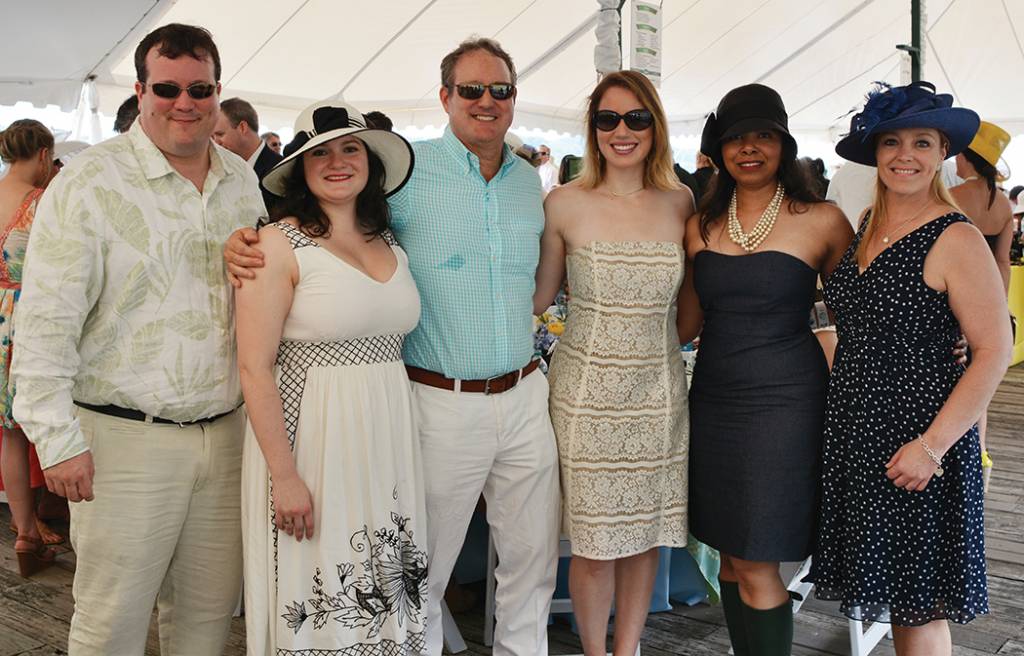 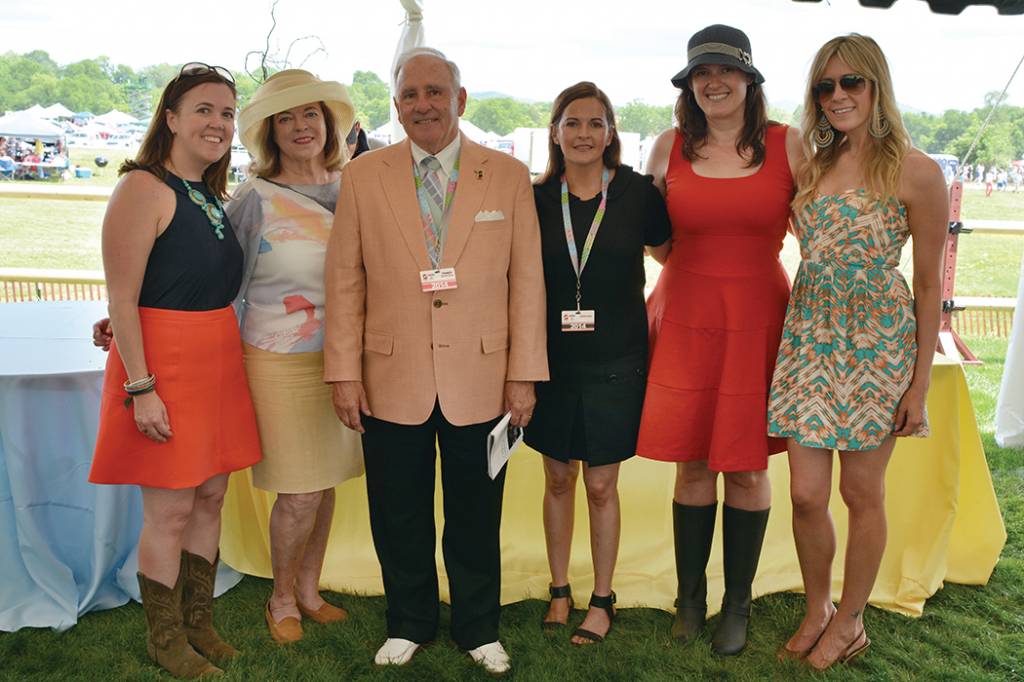 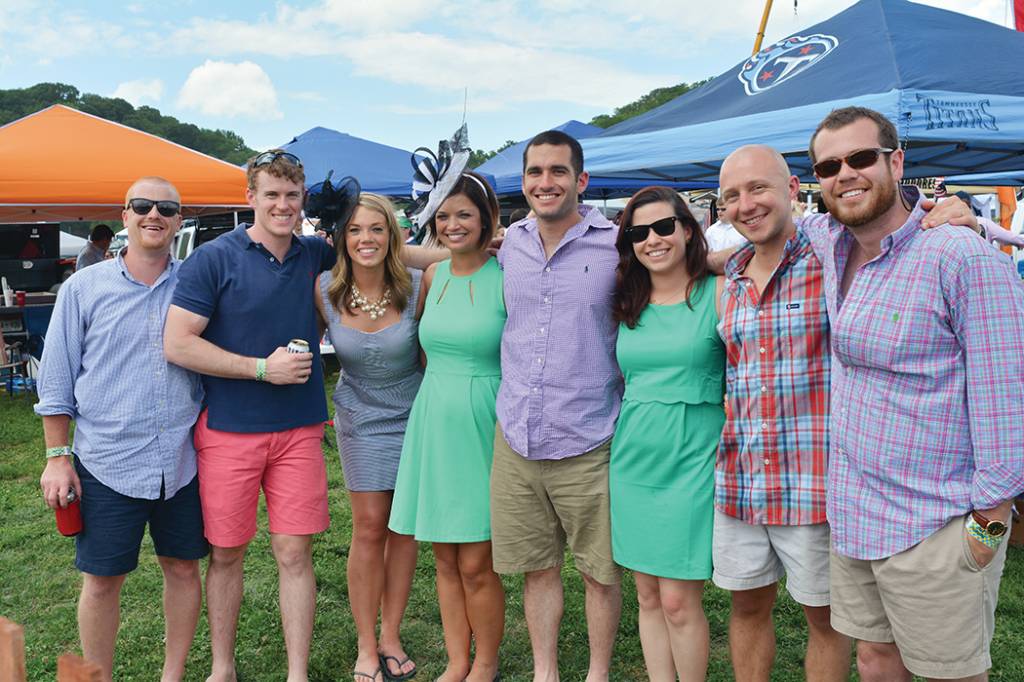 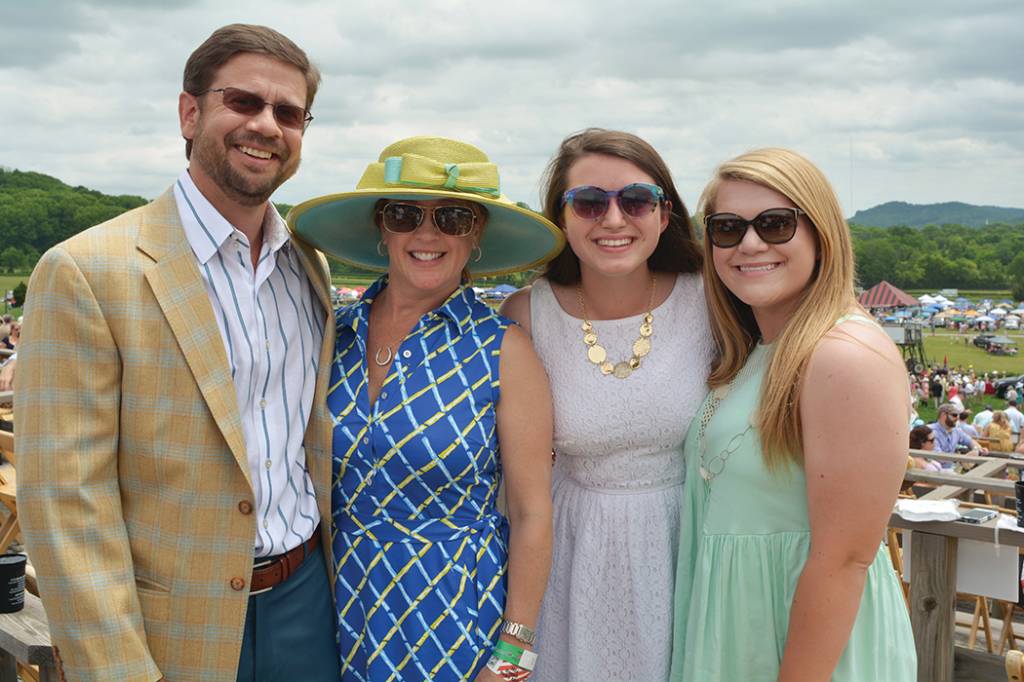 And they are off! The 73rd running of the Iroquois Steeplechase, in association with the Volunteer State Horsemen’s Foundation, was held a few weeks ago on a cloudy, humid afternoon. This is a major event benefiting Monroe Carell Jr. Children’s Hospital at Vanderbilt. Steeplechase Executive Director Libby Cheek stated that this is a Nashville tradition that ties so many people from our community together. Yes, Libby was so correct—about 25,000 folks, to be exact, came together for yet another equestrian Saturday in May. The first recorded steeplechase occurred in 1752 in County Cork, Ireland, where Cornelius O’Callaghan and Edmund Blake engaged in a flat match race about four and a half miles from Saint John Church to Saint Mary’s Church in Doneraile. The church steeples, being the tallest structures in the village, were the riders’ point to point, and this is where the term steeplechasing comes from. At our Steeplechase, race fans enjoyed one another, from tent party to box parties to the most exciting infield.

A question in this year’s race-day program asked: Is the steeplechase horse of a distinct breed? The answer is no; however, all horses must be registered by the Jockey Club. My question: Are the crowds of folks of a distinct breed? The answer is yes; all are totally thoroughbreds, at least on this second Saturday in May! The quote of the day came from Mary Perkins, my lunch partner in the Iroquois Society Tent. When I asked Mary where her hubby, Jay, was her response was, “Jay has been at his farm alone for three days and loving it. I cannot do what his tractor can do for him!”  And that, folks, is a wrap on Steeplechase 73.

As Bryant Fleming may have said: See you in a couple of weeks back here at Cheekwood for The Ball!