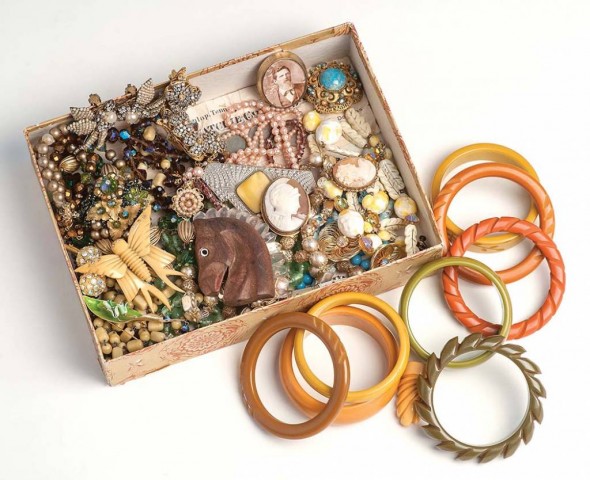 Inside the Jewelry Box: A Collection of Histories

Since ancient times, there have been jewelry boxes, a personal space in which to keep treasured items. The wealthy nobles of Ancient Egypt’s Dynastic Period belied the proverb “you can’t take it with you.” They did. Their tombs were filled with daily-life objects, such as furniture, jewelry, and dishes. Even the common folk had small, well-organized boxes for prized items, such as cosmetics and adornments.

I have had the occasion to inspect the contents of many inherited jewelry boxes and am of the opinion that the average person does not collect jewelry—the jewelry simply collects.

The boxes themselves have been as different as the collections they held, from multi-drawer floor models to the modest shoebox. The adornments are often found in the company of odds and ends, such as pocketknives, currency, military medals, class rings, and so forth. These adornments and disparate objects were once significant to someone, but without documentation or oral history that emotional value is lost, and all that remains is the intrinsic value, collectible value, and conjecture.

Over the course of a series of Appraise It articles, we will examine the contents of one such inherited box. 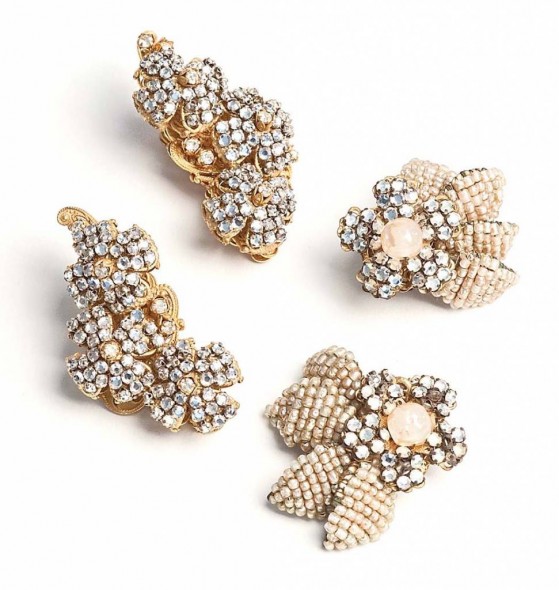 These exquisitely beaded, four-petal-form clip earrings are marked “DeMario-Hagler.” However, that mark is misleading. The earrings are the creation of Stanley Hagler, who began producing hand-wired costume jewelry in the 1950s. With his use of high-quality materials, his creations were frequently compared to Miriam Haskell. The hallmark found on the ear clips of these beaded beauties was the result of a potential collaboration with Robert DeMario, another highly regarded New York City designer working in the 1960s. The partnership never happened, but Hagler used some of the leftover findings as needed. Russian gold-plated findings, seed pearls, and filigree backings are a few of the hallmarks of Hagler’s intricate works. As exquisitely worked as these earrings are, it is hard to imagine that similar pieces can be found on the retail Internet marketplace for only $60 to $70.

The pair of floral-form earrings, composed of white glass beads and clear rose montee rhinestones, are the work of Jonne Jewelry. For a short period of time during the 1950s, Jonne Jewelry was a line produced by the New York City-based costume jewelry firm House of Schrager. Jonne Jewelry is often mistaken for the work of their costume jewelry contemporaries Miriam Haskell and Stanley Hagler, who also employed similar styling and fabrication techniques. The 5th Avenue-based parent company closed all its production in 1962. Similar examples can be found on the Internet marketplace for $50 to $75.