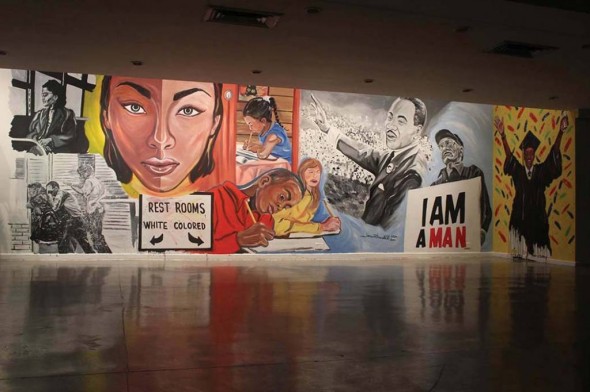 Mural at the Centro Colombo-Americana Institution in Medellín, Colombia. Images represent individuals involved in the civil rights movement that inspired the world-wide quest for freedom and social justice

We all have opinions and impressions about the countries and cultures of the world. But we never know until we go and embrace another culture! Nashville artist James Threalkill understands this.

The opportunity to embrace another culture was created when the Congressional Black Caucus approved funding for the Centro Colombo-Americana Institution as a vehicle for teaching English to students in the South American nation of Colombia. An extension of that English language program named for Dr. Martin Luther King occurred when program director Michael Cooper, an American teacher who moved to Colombia over thirty years ago, established a program to invite American artists/musicians to Colombia. Threalkill, initially invited for a thirty-day artist-in-residency program, has returned again and again over the past two years, developing strong bonds with the students and the culture he encountered.

“My first visit was to Medillín,” Threalkill explains. “Most people here only associate that city with drug cartels, but community and public officials have worked diligently to change the image and the reality. In 2013, Medillín was named ‘the Most Innovative City in the World’ for its culture, transport system, and environmental focus.” That same year, Colombia was recognized as the second most bio-diverse country in the world.

Threalkill’s cultural contributions to these changes involved lectures to schools on issues such as social harmony and career development and the creation, with students, of wall murals that explored social justice and civil rights through images, including Dr. Martin Luther King, Rosa Parks, the March on Washington, and children attending school together. “This is a way of educating people on the impact of Dr. King and helping Colombians acquire the skills to improve the community.” 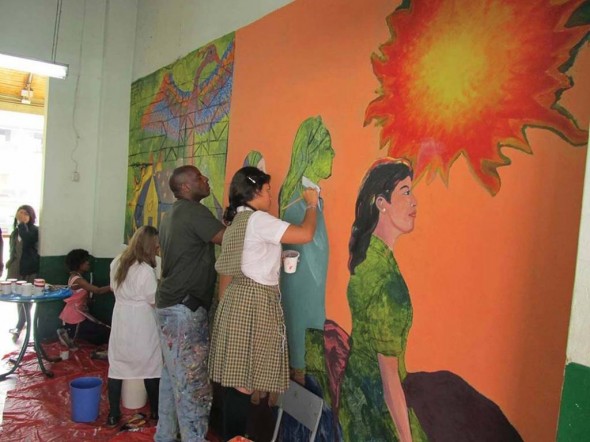 His second assignment was to the town of Quibdo, in the remote area of Choco. This impoverished part of the country with unpaved roads is also home to the Technological College of Choco, which focuses on architecture, law, and science.

“It is a fascinating place,” Threalkill says. “You have to fly in because there are no roads, and within the town motorcycles are racing everywhere. I had to work with a Spanish translator, but we created a mural, and at the end the students all came together to celebrate.”

The program has developed and expanded a spirit of community and collaboration between the students in Colombia and students at Tennessee State University. That relationship has spilled over into music, with visits to the TSU campus by talented musical groups such as Explosion Negra. Recently, TSU President Dr. Jewel Wynn and the Office of Diversity and International Relations at TSU have worked with program directors in Colombia to bring the TSU band to Medellín to participate in Feria de los Flores (the annual flower festival). This colorful festival began in 1957 as an outgrowth of the season when peasants walked down from the mountains and into the city carrying wooden frames loaded with flowers for market.

While he has assisted in making these cultural connections, Threalkill’s artistic participation and prestige as a lecturer have brought other opportunities, including a ten-day, six-city lecture tour through Colombia at the invitation of the US Embassy in Bogotá. American artists Jahni Moore, Nancy Testerman, and photographer Zoraida Lopez have all participated in the program, working with the Colombo’s Art Director Juan Alberto Gaviria, an America-educated Colombian. “There has been an incredible exchange of information, resources, and creativity,” Threalkill says, “And you know you’re making an impact and helping to uplift the people of Colombia and help them to develop skills and open opportunities.” Muy Excellente! 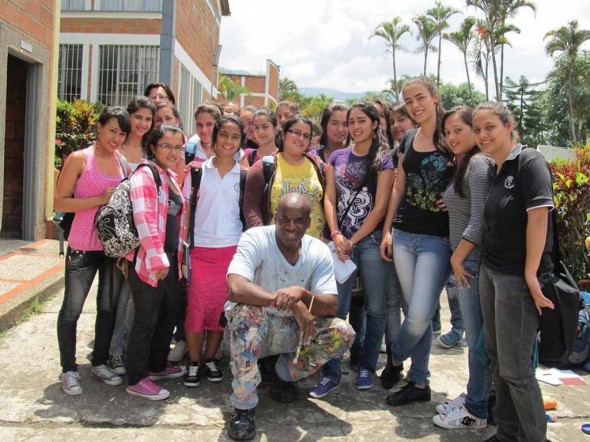