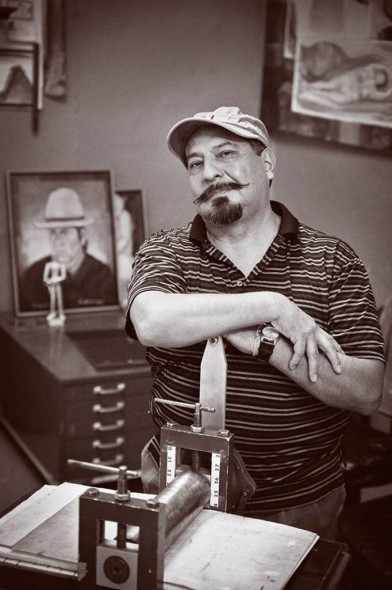 Inspired by Spanish-colonial codices found in his homeland, Bolivia, painter and printer Mendoza sends his Nashville-made prints to exhibit at the famed paper capital, Fabriano, Italy

Before I met Jorge Mendoza I had never heard of a quipus or Felipe Guaman Poma de Ayala, and I probably couldn’t have told you where Bolivia is on a map. An hour spent with the Bolivian-born printmaker and painter was all it took to get a surprisingly in-depth introduction to South American history and geography.

I met Mendoza at his home studio on a balmy Friday afternoon to discuss his latest paintings and upcoming exhibits. His studio is packed with dozens of brightly colored, abstract paintings in progress. Organic forms rendered in vivid shades of orange, magenta, and ocean blue overwhelm the space. Pinned to the left wall are two posters from the Prado: Hieronymus Bosch’s Garden of Earthly Delights and Goya’s Saturn Devouring His Son. On the studio door is a sign that says “Barco de Trabajo.” Translation: Work Ship—his spin on the traditional artist workshop.

Mendoza has lived all around the world—Brazil, Madrid, Miami, and now Nashville. His adventurous spirit drew him to a life of travel. As a young man, he visited Puerto Rico, Mexico, and Europe, drinking in the distinct art styles and traditions of each place. It all comes through in his work now.

“I’ve always liked museums,” he says. “I like to visit the Prado and look at the Goya, and Velázquez, Picasso, the Northern European schools of art. Everything stays in my memory.” 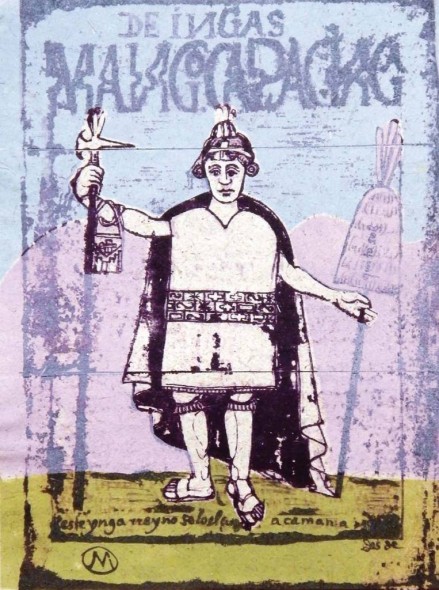 Mendoza began studying architecture in Bolivia but switched to visual art. “I liked colors and brushes much more than mechanical pens,” he says. In the late 1980s, he moved from Brazil to the U.S. to attend the University of Arkansas in Fayetteville, where he received two master’s degrees, one in studio art, another in literature. I ask him who his favorite authors are, and he contemplates the question for a moment. “Gabriel Garcia Márquez and Hemingway,” he says.

Mendoza is a researcher and knowledge seeker at heart. His work references many corners of the world but homes in on South America, his homeland. For Mendoza, the process of art making is indelibly linked to research and inquiry. The fabric of art, as he sees it, is woven from the threads of both technical and historical knowledge.

On a table in his studio is a portfolio containing a recent series of color lithographs on handmade paper. The prints are part of an exhibit opening this month in Fabriano, Italy, a city famous for its eight-hundred-year legacy in papermaking.

The prints are vibrant and remarkably tactile. The soft, handmade paper, each piece a different size and color, begs to be handled and scrutinized. 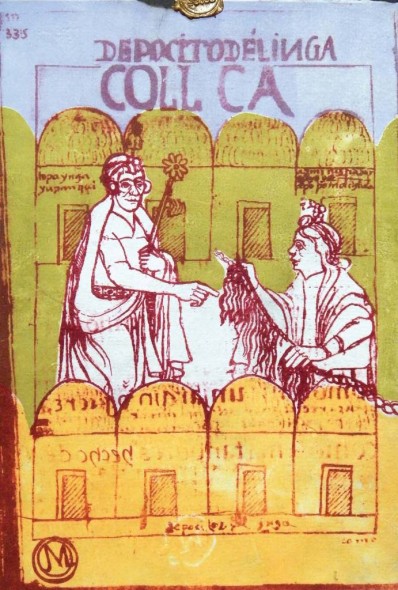 The images tell the story of Felipe Guaman Poma, a sixteenth-century South American chronicler, and the quipus, an ancient string-and-knot system used to represent numbers and keep early records. The quipus is a major subject in Mendoza’s work and appears often, in various forms. The symbolism of string—a thing that connects, ties together, links one thing to another—is as important as the historical narrative of Guaman Poma and ancient methods of communication.

In his paintings, history is explored in a more subtle way. Influenced by natural elements and Pre-Columbian iconography, he allows the ambiguity of the forms to lure the viewer into a psychological space that meditates on the emotional capacity of color.

“Art is knowledge,” he says. “Through research and investigation, I discover myself. I discover the story of South America, and I make it known to the people.”

For Mendoza, his legacy lies in the continuation of tradition, whether it’s making paper by hand or telling stories of worlds past.     “This is my input to you guys,” he says with a laugh. “I enjoy making art, but underneath it all, there’s research. There’s a story.”

Jorge Mendoza’s prints are in the group exhibit The Nexus of Craft and Fine Art in Papermaking at the Complesso San Benedetto in Fabriano, Italy, July 1 to August 31. For more information about Mendoza, visit www.jormen1.com. 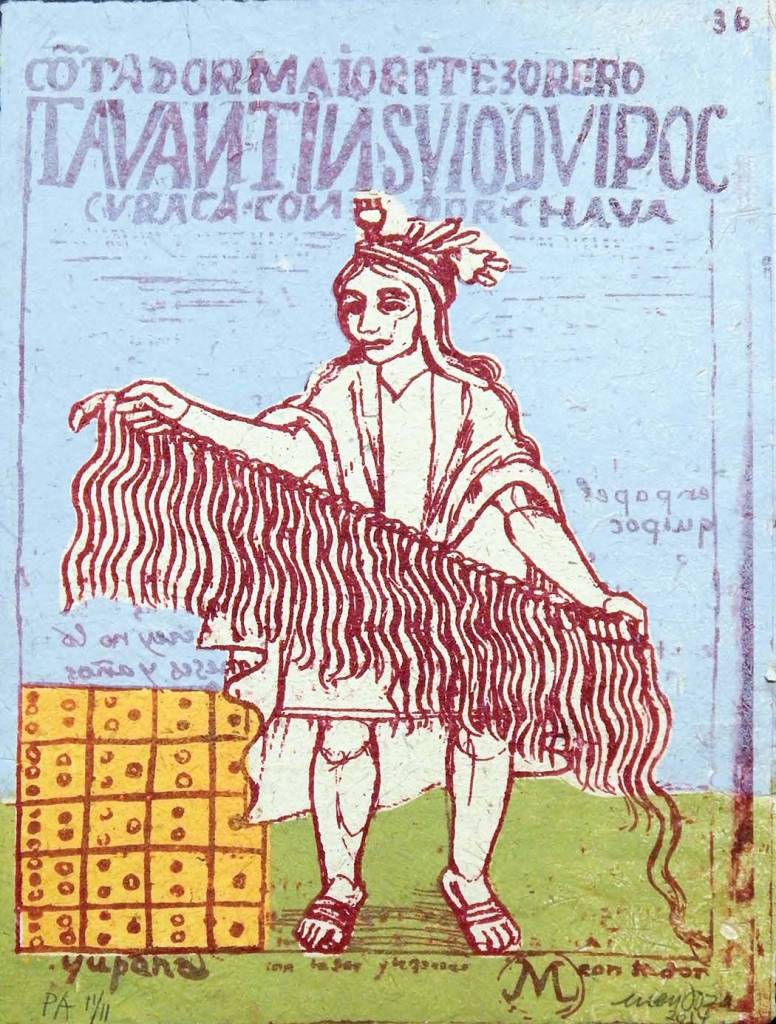 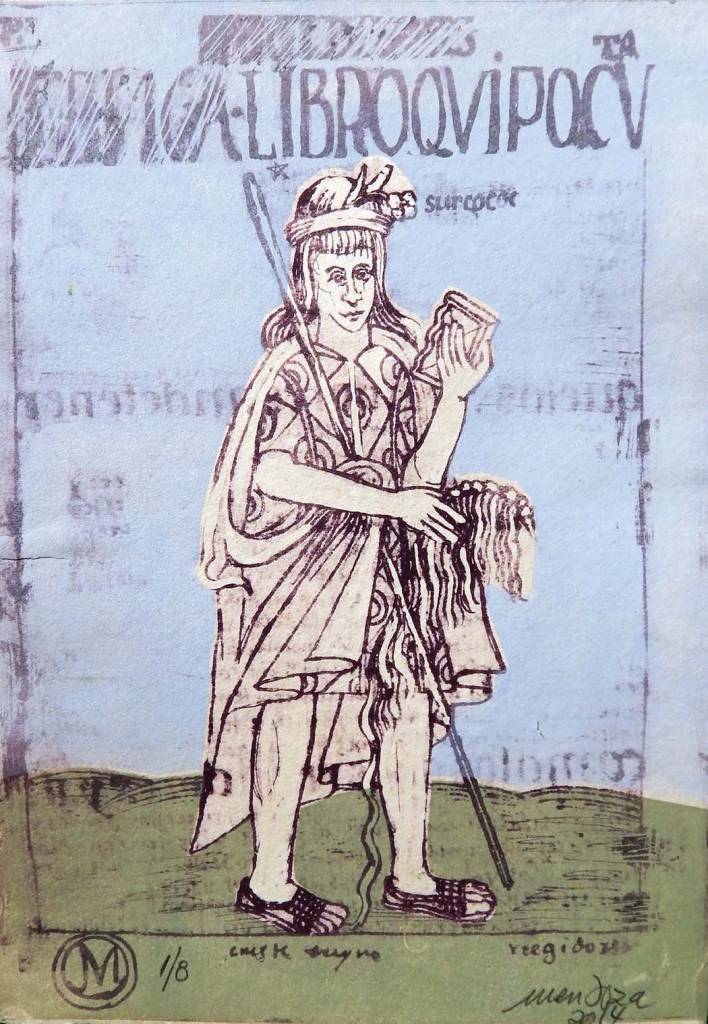 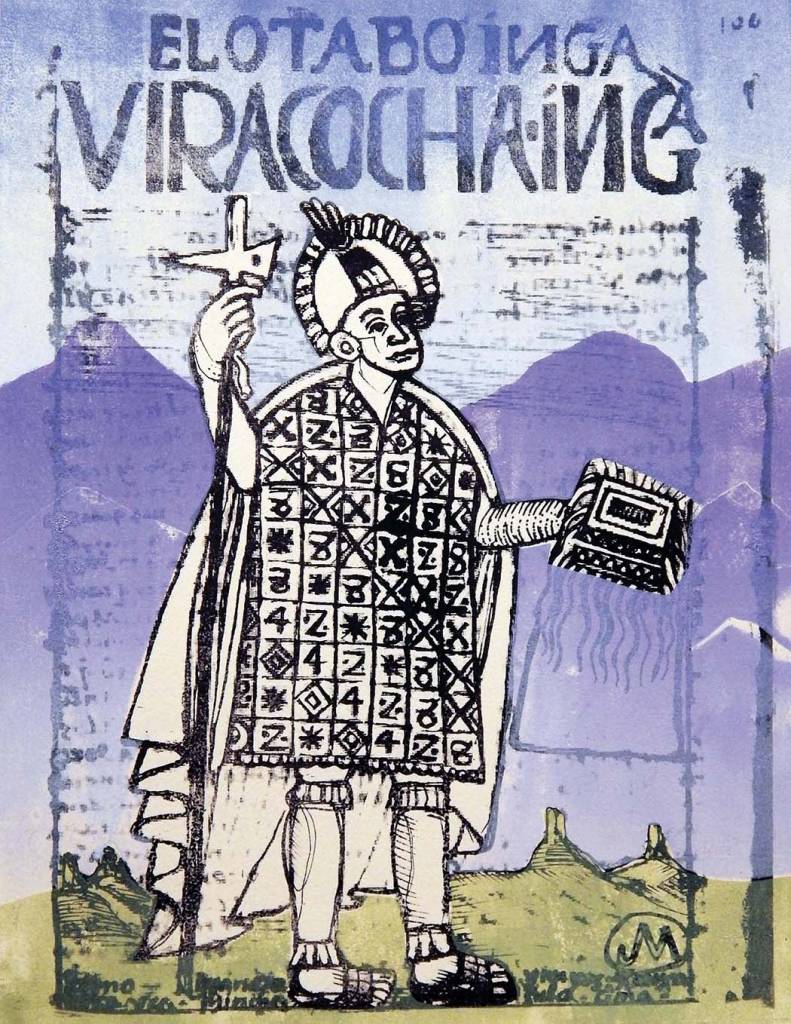