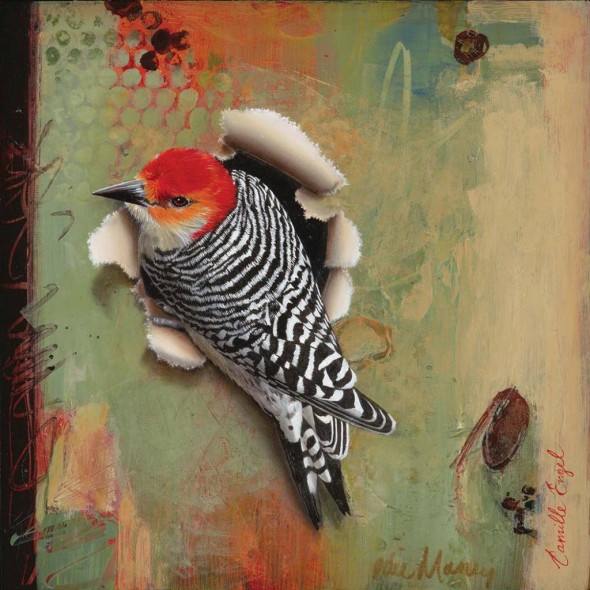 When Paint Starts To Fly

By etching into the cool, limestone walls of a cave in Vallon-Pont-d’Arc, France, a prehistoric artist recreated the silhouette of an owl, its head turned to the viewer at a 180-degree angle over its feathered wings. It is man’s earliest known depiction of a bird, this artwork dating back 36,000 years.

More recently, ornithologist John James Audubon elicited wonderment with his nineteenth-century depictions of birds. His talent was immortalized in his Birds of America illustrated book, which remains one of the most collectible books of its kind.

Like so many of her predecessors, Camille Engel—who didn’t seek out painting until she was in her forties—has become thoroughly enchanted by birds as subjects for her artwork. But it took some coaxing before she even picked up a brush.

On a typical sunny day Engel sits in her studio, where a nearby stack of books includes Masters of Dutch Paintings, hinting at her study and use of luminous light. Momentarily distracted by squirrels, who climb onto the bird feeders outside the studio’s French doors, Engel gets up to shoo them away. “They’re teenagers, and they’ve just gotten so brave,” she says. The squirrels twitch their tails and scatter. Then Engel sits back down to recount the watershed moment that urged her to paint.

“I was at church and our pastor said, ‘If you have a dream burning inside of you, and you have had it burning for a while, it could be a dream God put inside of you,’ ” she says. “I had always wanted to be an artist. And when I heard that, I decided I would take up painting. So I called Cheekwood and said, I’m old. I don’t have time to mess around. Who’s your best teacher?” 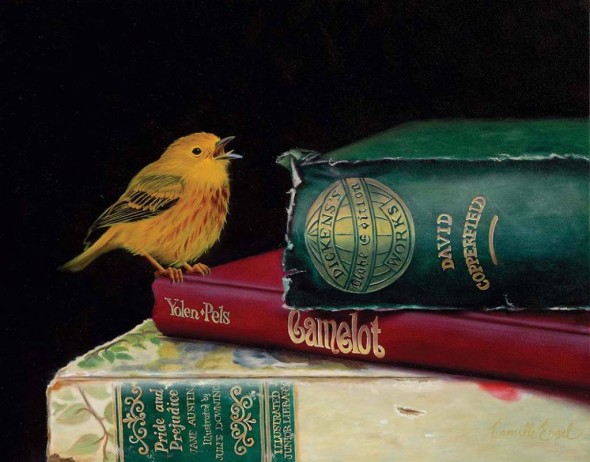 It was the year 2000. Engel began her painting studies at Cheekwood by depicting tableaux of flowers and fruit. By the time she had completed her eighth painting, a collection of roses, she had gathered a confidence that was ultimately validated: Art Calendar magazine put the rendering on its cover. “Very, very quickly I realized that this was a gift I had never used before,” Engel says.

By her eleventh painting, her progress—almost as if by miracle—far surpassed what could have been expected of her brief time with the brush. This eleventh piece, which depicted d’Anjou pears, was possessed of a halo of light, like that of Johannes Vermeer and the other Dutch masters. This light illuminated, rather than washed out, the dotted texture of each green pear’s flesh. 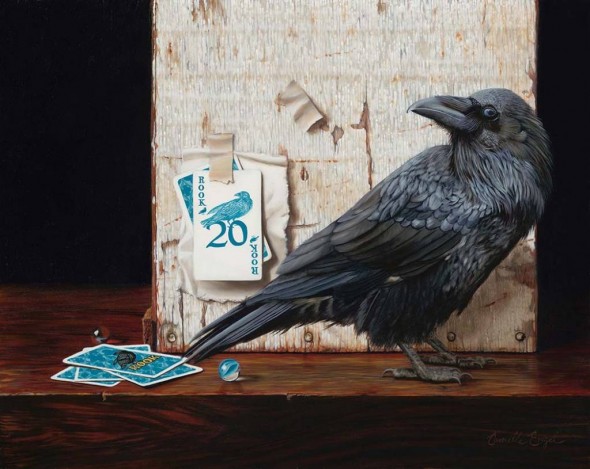 But it wasn’t flowers or fruit that captured Engel’s heart and canvas. It was the various birds that flitted through the thick canopy of trees surrounding her studio, including cardinals, titmice, house wrens, chickadees, and hummingbirds. She began depicting them in oil in 2006 in a style she calls contemporary realism.

“I love birds,” Engel says. “I love their freedom.” What makes her feathered subjects so fascinating is that she renders them realistically but still imbues them with individual personality. “I can paint impressionistically, but I’m drawn to painting the painstaking detail of realism,” she says.

Engel isn’t wholly without an artistic background. She was a graphic designer by the age of 16, and at 23 she opened a design studio in Nashville. She also once operated a shop in Opry Mills Mall that catered to bird watchers. There she sold bird feeders, bird houses, and cameras on motion detectors that would take photos of birds. She closed it down after, she says, “I was fortunate enough to realize it was a distraction from my painting.” 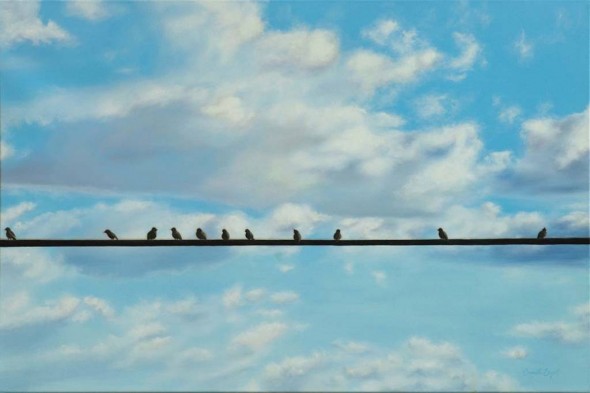 Her bird depictions are what have put her on the artistic map—particularly her most popular paintings, which are included in her Trespasser series. Drawing on the cleverness of graphic design and the detail-oriented nature of bird watching, Engel created these paintings in a trompe l’oeil style in which birds seem to have burst through the canvases. Around each bird’s curious face, there are the unfurled edges of canvas through which the creatures have “trespassed.”

This series was based on real-life events, Engel says. On gorgeous days when she couldn’t resist opening the French doors to her studio, birds—titmice, hummingbirds, and cardinals—have flown indoors. Some have even landed on her easel. “I attract songbirds,” she says.

But despite settling in with birds as her favorite subject, it was a simple red apple that captured Engel’s attention in her early days of painting. She was at a low point in life—“distraught,” as she describes it—and decided to reverse this state by finding three things each day for which to be grateful. 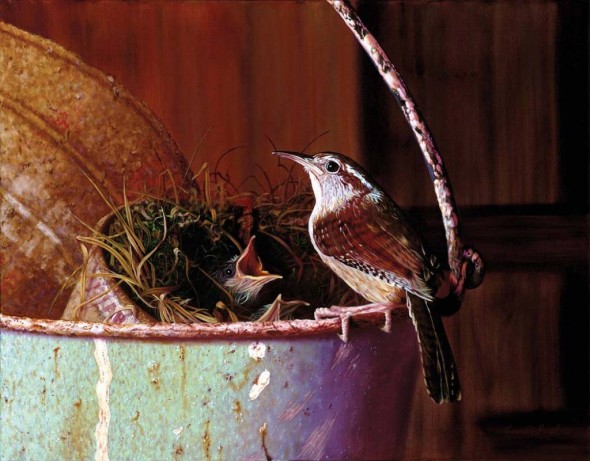 “So I picked up an apple one day, and I noticed the detail in the skin, that it wasn’t just a red object; it was so much more,” she says. “Noticing detail really gave me new life and new hope, I guess you can say. Noticing detail was my rainbow, like Noah had his rainbow.” And like those happy little bluebirds that find their way over the rainbow—as the famous song goes—Engel has found the place where the dreams that she dared to dream really have come true. 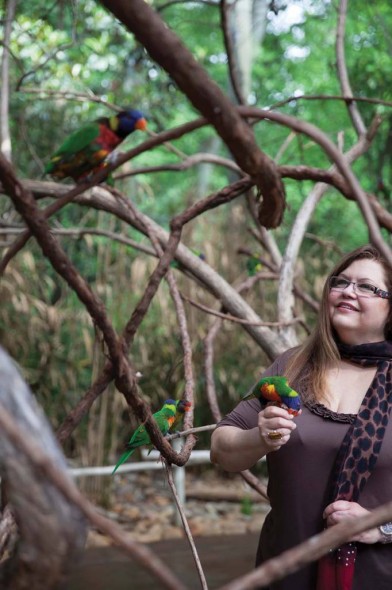