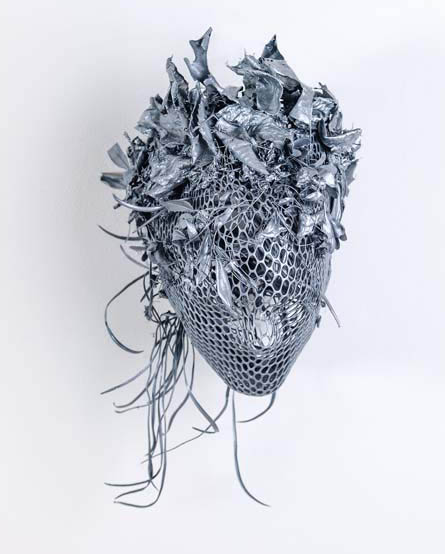 Patients with head and neck cancers may be prescribed therapy that requires immobilization of the head so that radiation rays are aimed at designated areas. This is accomplished by a porous mesh mask that fits like a second skin onto the patient’s face and is then affixed to a treatment table. Snap, snap, snap. For some patients, the sound of this mask being bolted into place can be horrifying.

By the time multiple treatments are finished—some people go through dozens—patients have experienced the mask’s claustrophobic effects and are glad to be done with it. Some people leave their masks at the hospital. Others take them home. One Nashville patient took his mask home and placed it in his back yard, where he shot it and set it on fire.

No two cancer stories are alike. And no two of these masks are alike. At the metaphysical level, each one tells a story as different as each cancer journey. 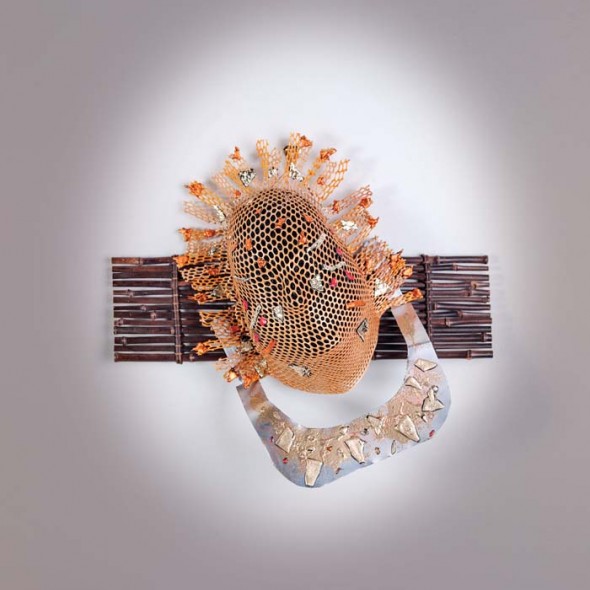 Cookie Kerxton, of Chevy Chase, Maryland, underwent twenty-eight radiation treatments for vocal cord cancer in 2008, wearing a mask so tight that its mesh left a checkerboard imprint on her skin at the end of each session (a side effect for many patients). Her experience gave way to curiosity: What did patients do with their masks after their treatment? And could these devices, which were identified with a painful experience, be channeled into something beautiful?

It turned out these masks could be transformed. An artist herself, Kerxton asked other artists to channel the masks into works of art that could, in turn, be exhibited and sold to raise funds for head and neck cancer patients.

Kerxton’s idea became the Courage Unmasked exhibition, in which more than one hundred artists participated. It was unveiled at the American University Museum at the Katzen Arts Center in Washington, DC, in 2009, and it paved the way for more such events.

Now Nashville will host its own Courage Unmasked event on September 27. During a gala at OZ Nashville, A Night of Courage Unmasked will feature masks worn by patients treated at the Vanderbilt-Ingram Cancer Center and refashioned into art by area artists. Some masks will be auctioned off to fund head and neck cancer treatment. This program is a partnership between Sarratt Art Studios, the Sarratt Art Gallery, and the Vanderbilt-Ingram Cancer Center. 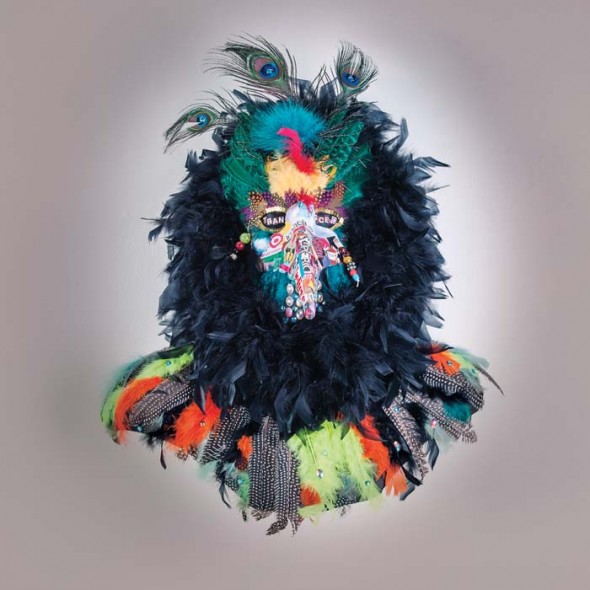 “The patients are very happy that something is going to be done with the mask, which most of them loathe,” Heustess says. His own father passed away from a brain tumor, and he said this relationship to cancer was a thread that ran through the project. Heustess worked with about sixty artists on this project and discovered that most of them were touched by cancer in some way, whether they were cancer survivors or were creating the art in honor of a deceased loved one. “Every person I passed out a mask to personally shared something of their story with me,” he says.

Many well-known area artists got involved, even if they were often working with materials with which they are unfamiliar. Heustess, a potter, felt the energy of one mask when he took on the challenge. The mask’s mouth had been cut out, so he pushed leaves through the hole so they flowed outward with vitality. He also covered the mask with dense foliage in a nod to the archetypal figure some call the Green Man, who symbolizes the life found within nature. It seemed an apt approach for transfiguring a device involved in so toxic an experience as radiation. 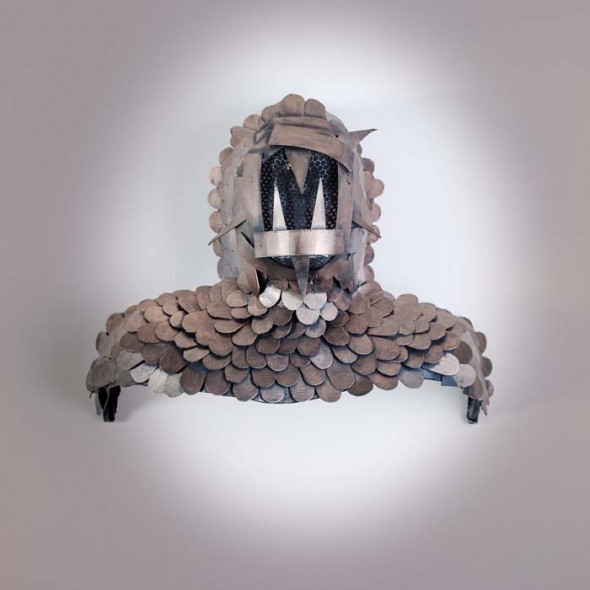 A few artists learned biographical information about the masks’ owners, while many did not. But, like Heustess, all transfigured their masks in a positive direction.

Lesley Patterson-Marx, an artist and educator, didn’t know the story behind her mask’s previous user, but she did know something of cancer. Her father died of a brain tumor in 2006. “I am kind of familiar with some of the treatments people go through, and also the way their body deteriorates,” she says. “It’s frightening. And the masks just kind of held that energy for me.” So she took a whimsical and cozy approach, enveloping her mask with rectangles and “puff balls” of yarn. “There’s just a lot of pain and suffering attached to the mask,” she says. “And I wanted my process to be one that didn’t contain any pain for me, one that was calming and healing and fun, a process by which I could maybe negate or heal some of that.” 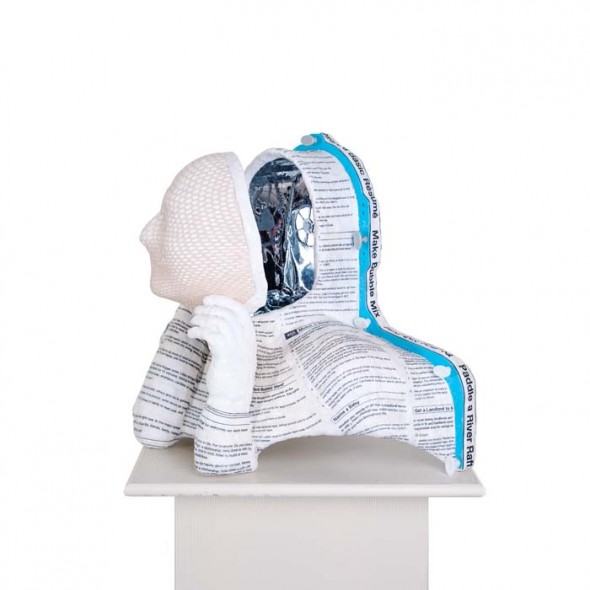 Many artists decorated the exterior of a mask, while others turned the mask around. “It becomes a shelter,” Heustess says. JC Johnson, an instructor at Vanderbilt University’s Sarratt Art Studios, built something akin to a doll’s house on her mask’s interior, complete with a balsa wood chandelier.

The themes of regeneration, healing, and comfort run throughout the artists’ work, but there is also the theme of grit and determination. Kelly Harwood, an artist and owner of Gallery 202 in Franklin, where six artists created masks, took that approach. Both Harwood’s mother and father passed away from cancer, so like many of the artists, he was close to the disease. He wanted his mask to relate to the bravery one assumes when undergoing radiation treatment. 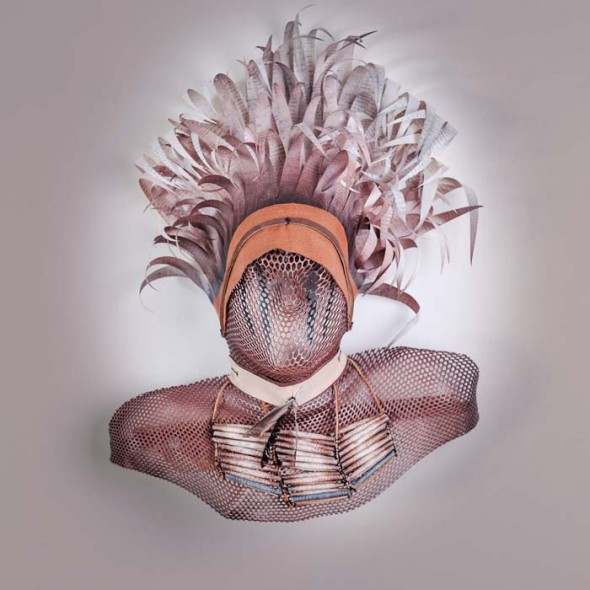 Jennifer Knowles, Metamorphosis. “These materials are meant to echo the metamorphosis of regular folks into fierce and vulnerable warriors.”

“I took the mask into my studio and put it on a table, and I was like, What am I going to do to make this magnificent?” he says. “That’s when I got the idea of being brave enough to undergo radiation.” Harwood envisioned a Native American warrior—a “brave.” Then he considered how many large feathers he would need to create a headdress. But after holding up a paintbrush beside the mask—Harwood is a painter—he decided his paintbrushes would become the headdress.

With the Courage Unmasked project, an array of talented Tennessee artists have been given parameters that are strictly defined: Create beautiful art out of a radiation therapy mask. But the variations they have created within that narrow vocabulary are abundant. One can only hope that the cure for cancer can become—one day—as abundant.

A selection of masks will be auctioned at A Night of Courage Unmasked at OZ Nashville on September 27. For more information about the event and the program, visit www.courageunmaskedtn.org. 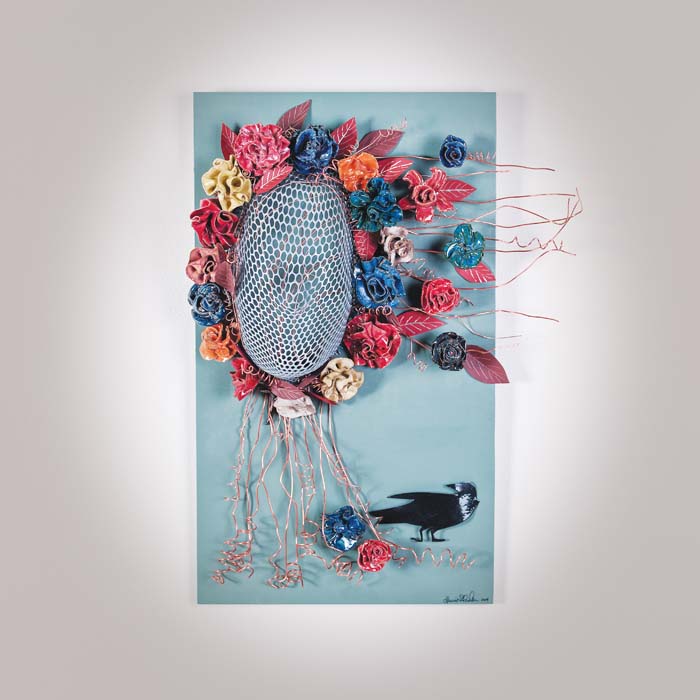 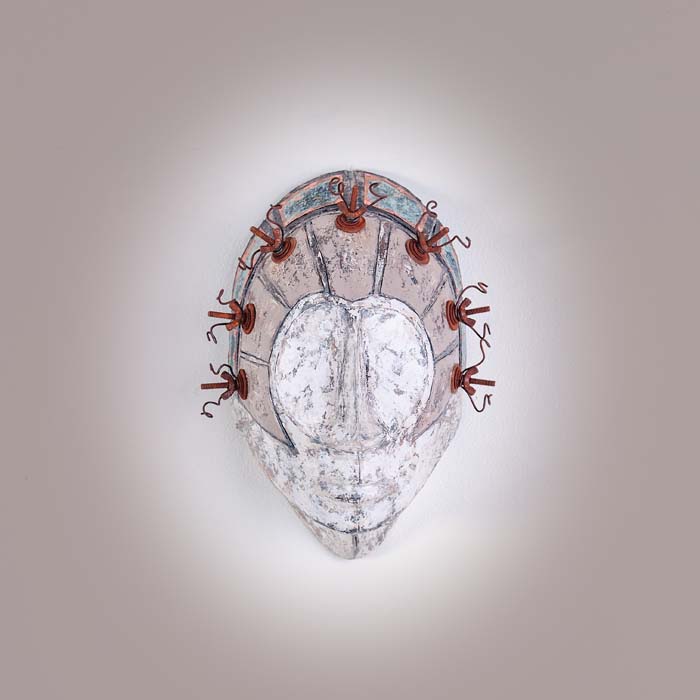