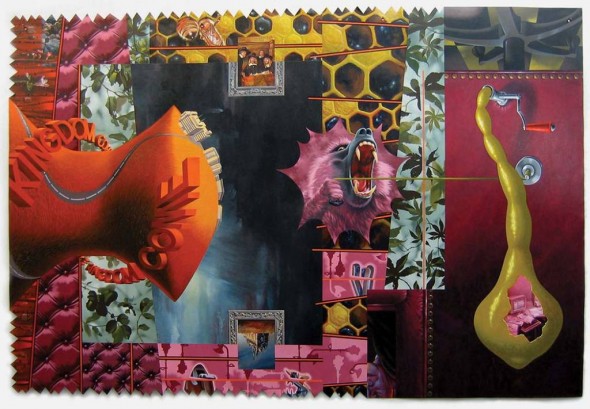 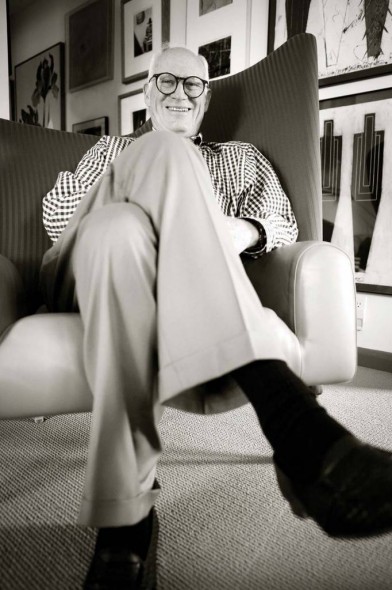 I started passionately collecting 45 years ago with the tutoring of an art advisor who was a painter, collector, and gallery owner. I learned from other collectors, studied the national arts magazines, followed who was getting museum shows, and developed my own “eye.” I bought the best works available from a given artist whose work I liked but who also had a chance to make art history and whose work had a chance to go up in value. I sold most of the collection, and my smaller house is still crammed with art that I love. To buy new art, I have to be very impressed.

Nashville is full of wonderful painters who are not creative or cutting-edge enough to be called artists, in my opinion. Barry Buxkamper is a great local painter—and an artist. I loved his paintings of people and machines rendered as blow-up plastic toys. The painting I bought, Office Park: String Trimmers and Executive Chair (2006), has moved beyond that. It’s from a series about the encroachment of technology and development on nature. He painted it flat on a table, working on it from all sides. It is a stream of consciousness, surrealistic work. It fits my criteria: I really like it; it is a finely painted, imaginative work, and I think it will go up in value as Barry continues his work.

Barry Buxkamper’s mixed-media works reveal a window onto an alternate world where magic is real and convention is teased. He finds inspiration and imagery from objects and events in everyday life and the history of art. He often explores themes of vanitas and man’s waning relationship with nature through humorous juxtapositions. This painter and former Middle Tennessee State University Professor of Art is best known in Nashville for his engaging teaching and artwork frequently on exhibit at Cumberland Gallery. His formal study of art began at the University of Texas where he received his BFA, and then he attended the University of Illinois for his MFA. He has participated in numerous Biennial Exhibitions, including the Mint Museum, Whitney Museum, and Delgado Museum. His work has been featured in solo and group gallery exhibitions around the country and belongs to many corporate and private collections. Buxkamper also built a career in graphic design and was the recipient of the Nashville Advertising Federation’s Diamond Award three times. For more information, visit www.cumberlandgallery.com and visit www.nashvillearts.com to read our story about him from March 2012.