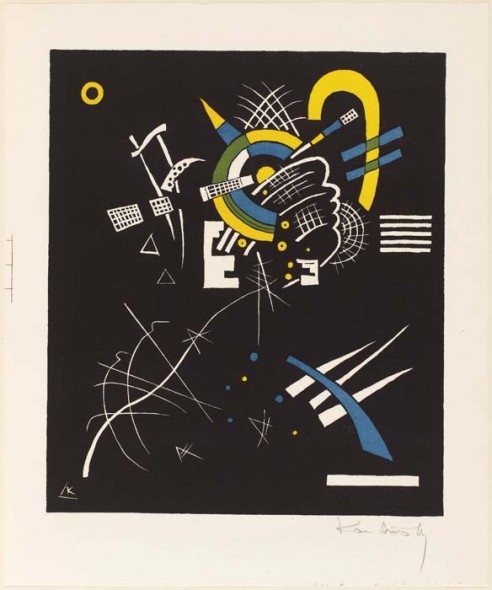 In today’s world where the vast majority view abstraction as something to color coordinate with their living room sofa, it’s difficult to imagine a time when the leading artists of the day were driven by a desire to create abstract paintings that would evoke genuine emotional and spiritual responses in the viewer. The very notion that such a connection could be possible through abstraction in a post-modern world is so foreign to the late twentieth and early twenty-first centuries that it led critic Rosalind Kraus to write in her influential essay Grids that “by now we find it indescribably embarrassing to mention art and spirit in the same sentence.”

But the belief that art could be an expression of deep spirituality and emotion was one of the driving forces that propelled Wassily Kandinsky to develop an abstract language for visual art and create some of the greatest masterworks of twentieth-century Modernism. Kandinsky: A Retrospective at the Frist Center for the Visual Arts brings together many of Kandinsky’s greatest works and provides a chronological view of his artistic evolution from figuration to abstraction. “Drawn almost entirely from the collection of the Pompidou Centre in Paris,” the exhibition highlights “Kandinsky’s innovative responses to a world that was in dramatic flux . . . and also includes intimate studies and drawings, which give further insight into the invention of a very private language as a means for liberating the mind from the material world,” according to Frist Center Curator Mark Scala.

Kandinsky laid out many of the ideas that would provide the structure for his work in his treatise Concerning the Spiritual in Art. The book was heavily influenced by the mysticism of theosophy, but it was also concerned with theories of how color, form, and gesture can have a psychological and emotional influence on the viewer. Despite the work’s dated mysticism and utopianism, Scala says that “it is still possible to appreciate the complexity and thoroughness of Kandinsky’s analysis of where art had been and how it might have a role in advancing the cause of the inner life. This idea, after all, has been at the heart of much abstraction throughout Modernism.”

In photographs, Kandinsky most resembles a professor or lawyer, with his spectacles and buttoned-up business attire, rather than an avant-garde artist. Perhaps this was because, at heart, Kandinsky was an intellectual who had studied law and economics in Moscow and was steeped in music, poetry, theatre, and philosophy as well as the occult.

The life-changing confluence of a mystical experience in front of a Monet Haystack painting and a performance of Wagner’s Lohengrin led him at the age of thirty to jettison his burgeoning law career and move to Munich to study painting. In Munich he grew rapidly as an artist, working through styles and banding together with fellow artists to found movements including The Blue Rider group. The Blue Rider’s focus on nature as a primal source of spirituality would prove pivotal to his development as an abstract painter.

Kandinsky’s work is reflective of the tumult of the first half of the twentieth century as war and political upheaval drove the artist from Russia to Germany and finally to France. And like a chameleon, at each destination along the way, he would adopt new formal means of expression. From his early figurative paintings to his well-known Compositions to his later biomorphic works, Kandinsky was a restless seeker—constantly evolving his visual language.

In 1910 Kandinsky created one of his first truly abstract works, aptly titled First Abstract Watercolor. In this work blue, red, and green shapes swirl around a white ground as energetic lines intersect and create a framework of movement. The watercolor insists on the flatness of the picture plane, and the abstract elements seem randomly placed—there’s no apparent formal order to the piece. As critic Donald Kuspit wrote, “What makes it extraordinary . . . is its structurelessness. It is important not only because it is totally abstract—as distinct from rendering familiar appearances in an abstract way, distorting them so they become unfamiliar and thus fresh, which was what Matisse and Picasso did with the figure, landscape, and still life—but because it seems formless and unfinished.”

Some of Kandinsky’s best-known works are his series of Compositions, which took the language that first appeared in his abstract watercolor and expanded it to an epic scale. 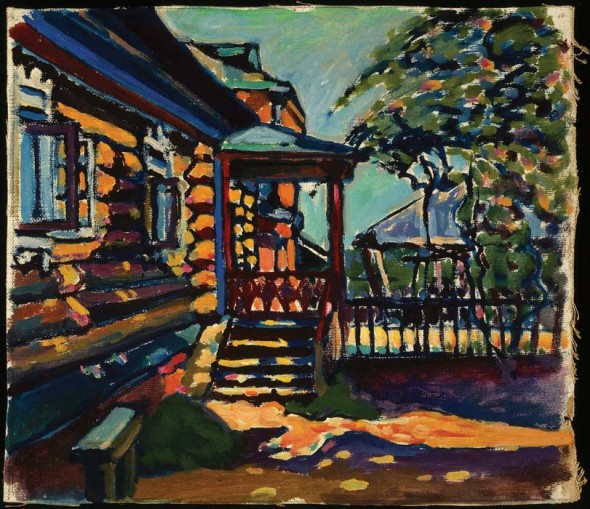 Painting with Red Spot from 1914 is, for curator Mark Scala, one of Kandinsky’s most expressive works. In it he depicts a field full of whirling color and indistinct shapes colliding through a yellowing atmosphere. “The work is teeming with vitality and turbulence. It was one of Kandinsky’s last paintings made at the dawn of World War I, and it shows a premonition of destruction, the old order tearing itself apart,” according to Scala. Yet within this destructive visual world there is a glimmer of hope, “a jewel-like area of small, colored brushstrokes, hinting at a seed of renewal that reflects Kandinsky’s undying belief in the power of the human spirit to rise above conflict.”

Kandinsky: A Retrospective is perhaps one of the most important exhibitions that the Frist Center has mounted, providing an overview of one of the most influential artists of the twentieth century, whose achievements were more radical than those of Picasso and Matisse, both of whom flirted with abstraction but never developed a truly non-referential visual language.

“Kandinsky is a giant of modern art, who expresses better, perhaps, than anyone . . . the tremendous upheaval and idealism of the twentieth century,” according to Scala. His works are “complex, and the allusions and relationships are not meant to trigger a single emotion but the profusion of feeling that comprises existence.”

Kandinsky: A Retrospective will be on exhibit at the Frist Center for the Visual Arts September 26 through January 4. For more information, visit www.fristcenter.org. 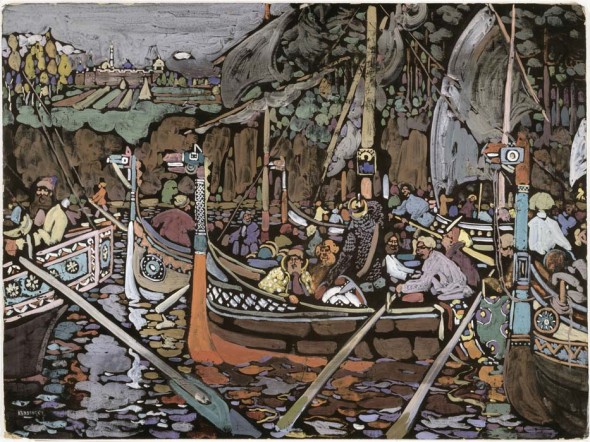