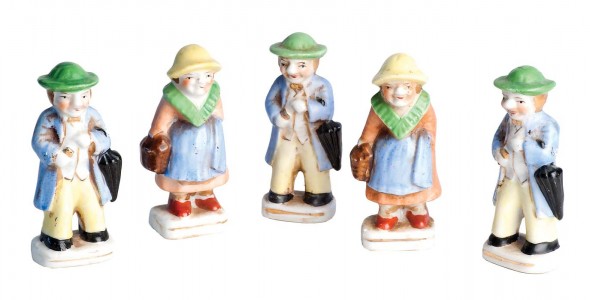 The Simplicity of Collecting a Mark Tied to World History

With another action-packed summer of taping the Antiques Roadshow behind me, it may be a good time to share some of the items that are most frequently seen during the course of our stops across the country, the common items that have values well below one hundred dollars and that, while they generate great curiosity, have fewer potential buyers than sellers.

“Made in Occupied Japan” is the mark found on goods made after World War II during the Allied Occupation of Japan, between 1945 and 1952. Collectors now search for these pieces of pottery, porcelain, toys, and other goods made for export during that time, simply for the mark.

At the end of WWII and the surrender of the Empire of Japan, it was the common intent of the Allied Powers to render Japan incapable of ever returning to the field of battle. “Demilitarization” was deemed the first policy of the Occupation authorities and was accompanied by abolishing Japan’s armed forces and dismantling its military industry.

As the Supreme Commander of Allied Forces in the Pacific, General Douglas MacArthur continued in post-war service to the region when he was named the Tokyo-based Head of the Occupation Forces in Japan. Under the MacArthur rule, that nation was given a democratic constitution and internal reforms, implementing the ideals of a democratic nation into the island’s politics, business, and civics. When MacArthur set about his mission to revive Japan’s economy, he commanded that all factories print “Occupied Japan” or “Made in Occupied Japan” on their products.

The range of products that can be found bearing the mark are diverse: linens, cameras, fishing lures, tennis rackets, and tools. However, in the world of collectibles, it is primarily the tin mechanical toys and ceramic figures that collectors focus on.

The majority of Japan’s ceramic output of the “Occupied Japan” period was limited to modest imitations of Hummel, Meissen, and Victorian ceramics. Unlike the windup toys, these inexpensive novelties for dime stores and copies of European ceramic favorites rarely exceed a present-day fair-market value of over a hundred dollars, with most valued under twenty dollars.