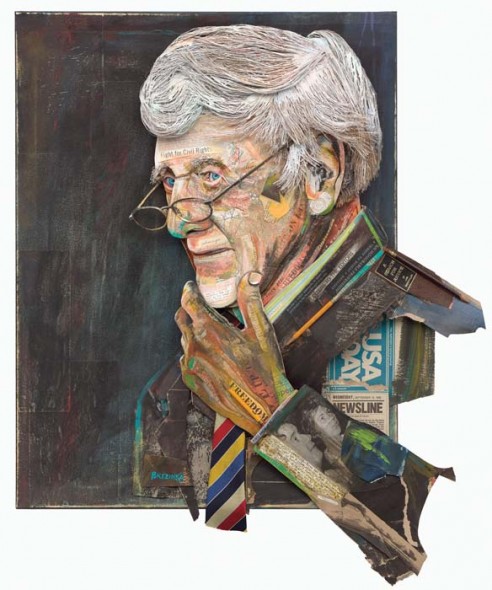 Wayne Brezinka’s portrait of John Seigenthaler, American journalist and defender of First Amendment Rights, includes Seigenthaler’s glasses and one of his neckties, provided by his secretary, Ms. Gay Campbell. Among the historically significant items used in the portrait are original Tennessean mastheads from 1973 and 1974, a 1982 USA Today, and a 1961 press photograph of Freedom Rider Susan Wilbur, whom Seigenthaler saved from the riots in Montgomery, Alabama.

Seigenthaler was commissioned by Vanderbilt Magazine, the alumni magazine of Vanderbilt University, for an article in its Summer 2014 issue about Seigenthaler and his long association with the university.

Brezinka’s Seigenthaler is part of his new solo exhibition Paper Cuts: Discarded Illusions and Found Realities at O’More College of Design. The exhibit opens with a reception during the Franklin Art Scene on Friday, October 3, from 6 until 9 p.m. and will be on view through November 5. For more information, visit www.brezinkadesign.com and www.omorecollege.edu.