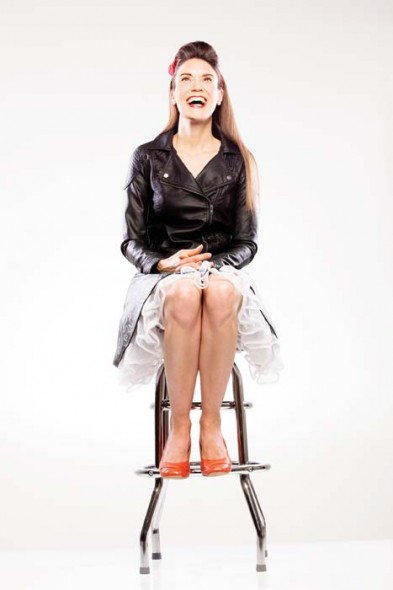 All Dressed Up & Ready to Paint

Her list of masterpieces would have any collector envious: Van Gogh, Kandinsky, Magritte, Munch. But though Cassie Stephens’ pieces are originals, they hang in her house rather than in galleries. Stephens’ sartorial art includes her sassy riff on Andy Warhol’s Campbell’s soup can, a red-and-white number with wide, silver trim that was posted on the Campbell’s official website. Her take on Kandinsky’s Black Grid was tweeted by the Frist Center.

She has also added Van Gogh’s Sunflowers to a cardigan and reinterpreted his Starry Night on a sleeveless, navy J. Crew A-line. Halston used bugle beads in his version (seen at Cheekwood in 2005); Stephens used twinkling mini lights and dramatic needle-felted swirls. 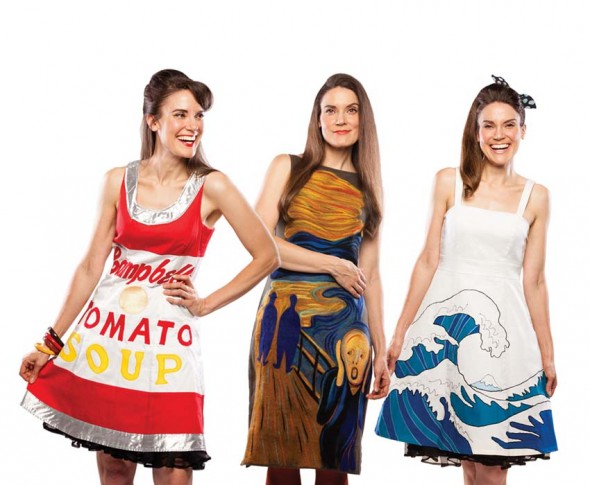 Though she insists she’s a novice, that’s hard to believe when looking around her fantastic sewing studio. She may be a largely self-taught newbie, but she’s obviously all in. Fabric—lots of it—hangs by color from wire shelving along one wall and in a closet on the adjacent one. Works in progress and clothes waiting for her attention are also in the closet. Two dress forms hold examples of Stephens’ creations, and a black pleather skirt on her sewing table is being fitted with appliqués of Keith Haring-esque figures morphing into art supplies.

Stephens generally uses vintage clothing purchased from thrift stores or items found on sale racks for her projects. “If I ruin something, it’s not going to break the bank or make me feel terrible,” she said. Her Black Grid began life as a simple white dress on clearance at Target. Stephens sketched out the pattern from Kandinsky’s Black Grid in chalk before painting it (her degree is in painting) on the front and, in this case, also the back of the dress. She plans to wear the final piece when she takes her students to see Kandinsky: A Retrospective at the Frist Center.

Stephens introduces her classes at Franklin’s Johnson Elementary to a different artist each week, and though she doesn’t make a dress for each one, she does incorporate her wardrobe into her lesson plans.
I teach little kids, and I’ve always dressed a little funky. I noticed that they really respond to that—and the sillier the better. 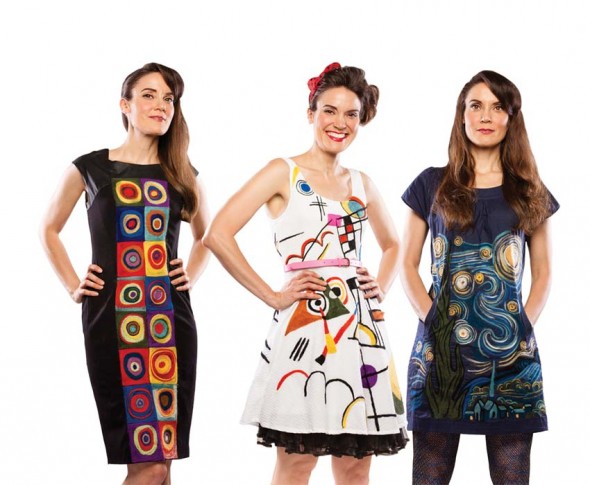 When the classes were studying Asia, for example, she wore a dress appliquéd with a “Wave” motif.

“The kids just thought it was the coolest thing that I matched the [mural] outside the room, and it got them very excited about learning about Hokusai,” she said.

Kids aren’t the only ones she has impressed with her designs. When asked to lead a workshop for teachers based on Cheekwood’s recent Andy Warhol’s Flowers exhibition, Stephens said she worked on her outfit before her session plan and came up with a series of floral jelly prints on a lilac minidress. And should Stephens need something chic to wear to an art reception, she could opt for her second Kandinsky dress; it’s a black sleeveless with a row of colorful, concentric circles running down a pleather panel in the center.

Stop the presses! We just learned that the Tennessee Art Education Association (TAEA) has named Cassie Stephens the Elementary Art Teacher of the Year for the state of Tennessee. Congratulations, Cassie!