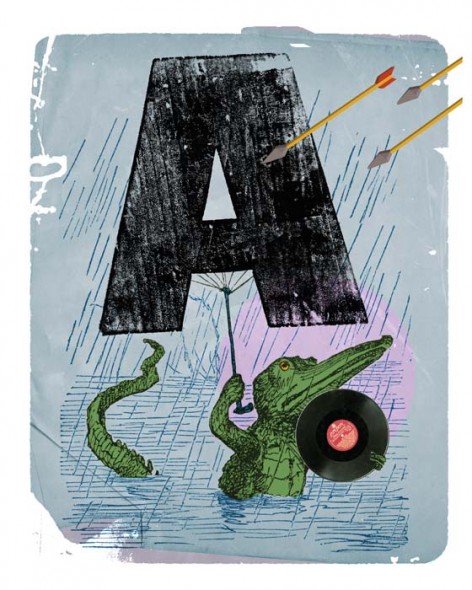 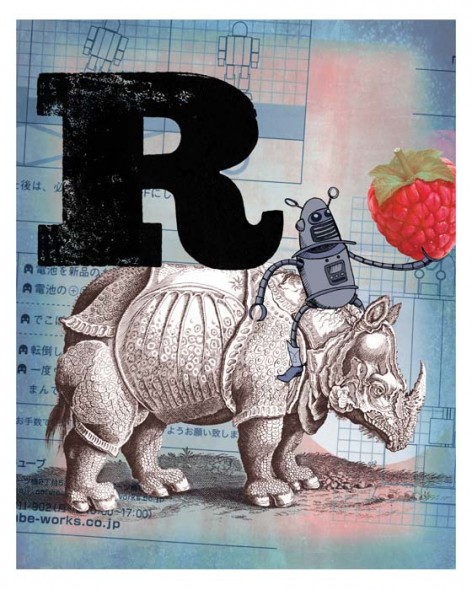 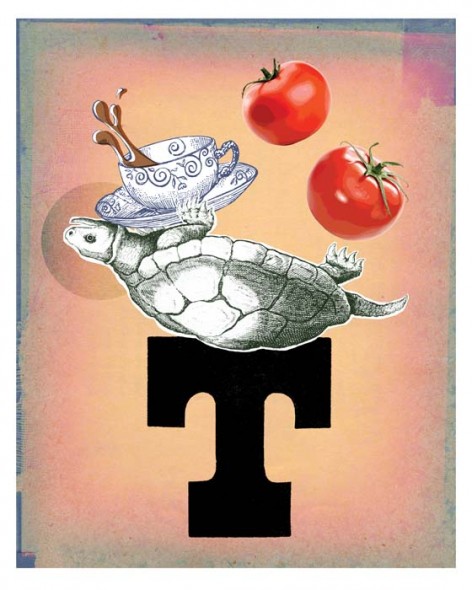 A gorilla blows bubble gum while playing a guitar. A robot holding a raspberry sits atop a rhinoceros. Why? Ask the cat, who’s smoking a cigarette and holding a cicada.

So goes Leslie Haines’s Abecedary, a graphic-design collage series that illustrates the alphabet with a Victorian flair for the bizarre. The artist/designer/professor/typography geek has been in the game a long time. She’s chaired two graphic-design departments at universities, run a successful business, earned three degrees, won twelve regional ADDY awards, and designed the Tennessee Arts license plate, but she couldn’t help but feel that her magnum opus lay just over the horizon.

“I spent a lot of time waiting for that big project to sink my teeth into,” she said. When Britt Stadig asked her to do a few animal pieces for a show at Volunteer State last spring, she turned to a heavy tome of Victorian engravings that she’d had for years. “I came across that walrus with the human face,” she said, pointing to W is for Walrus. “He’s so cool and bizarre and wonderful. I love the humor in it.” She made the W piece, then the S is for Slug, and then she couldn’t stop. “They’re so quirky and fun. It humanizes the animals. The Victorians had a bizarre sense of humor.”

The original images are 16 by 20 inches, and ten of them showed at Belcourt Gallery in September. “It’s a cool assemblage of both traditional and digital,” she said, referring to her collage method. She scans images from books and papers she’s salvaged over the years. Using both physical letterpress blocks and LetterMpress software, she constructs the work in Photoshop using multiple image layers. The results are playfully ironic and recall Terry Gilliam; for example, the S picture features a saint playing a skeleton’s arm like a cello.

Hailing from upstate New York, Haines holds a B.S. in Graphic Design and an M.A. in Advertising Design. She relocated to Nashville in 1993 to take a job at The Tennessean as a marketing design specialist. Before long, she was teaching and acting as department chair at Watkins College of Art, Design and Film. After six years, the college was applying for SACS accreditation and asked her to look into getting a terminal degree. “I had never planned on teaching, let alone making it a career, but at that point I knew it was what I really wanted to do.” She found a low-residency M.F.A. program at Marywood University in Scranton, Pennsylvania, that required study in New York museums, collections, and studios. She found that the degree not only gave her the credentials she needed, it showed her that she could tell a story with typography, giving her work a new direction. 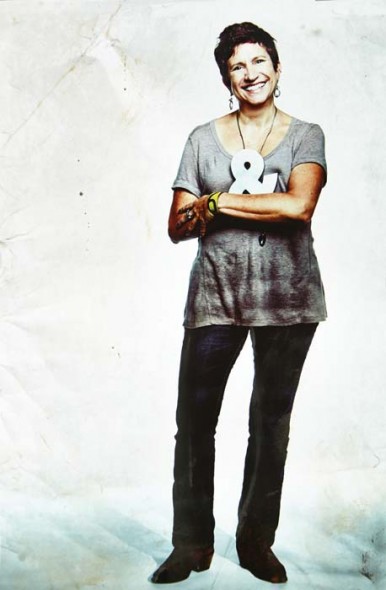 She now teaches at MTSU, which allows her time to focus on her personal work while being enriched as a professor. When asked about the next generation of graphic designers, she said, “The ones that will succeed are the ones that are willing to evolve and come up with new solutions to the same problem. They’ll be visually able to tell the story in a different way.” 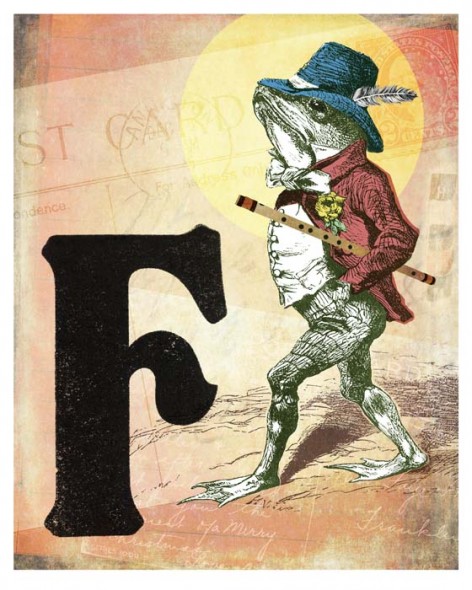 Haines urges her students to embrace creativity as a discipline. In 2012, she did this herself with “The Daily Six,” a blog where she created a design every day of the year. It gave her a chance to explore type, textural work, and techniques before introducing them into the classroom. But the bigger message for her students is about the artist’s responsibility as a whole: “If you’re going to grow, you have to be willing to fail, and you have to be willing to push yourself.” 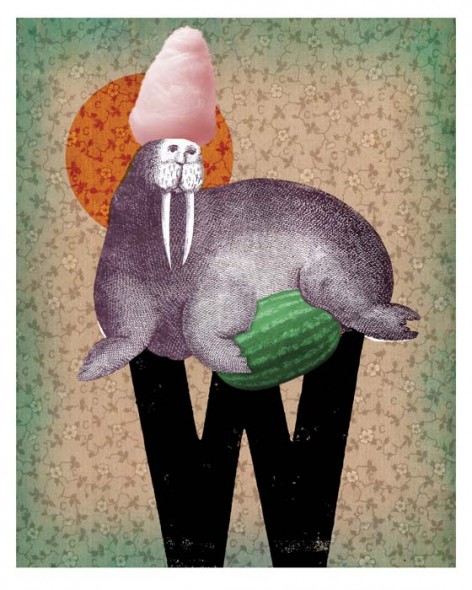 She might return to a daily blog in the future, but for right now, Haines is busy with Abecedary. MTSU awarded her a grant to frame all twenty-six letters of the series. The full alphabet will be completed by May and ready to exhibit. A book is part of the plan, too, and maybe an iPad app. “It’s marrying my love of letterpress with imagery, humor, and texture. It all came together, but it took a long time to get there.” 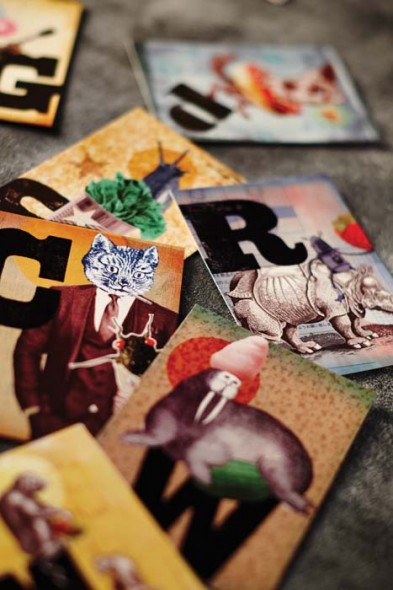 In the meantime, a slug is stretching out of a can of spinach, gazing at the stars. 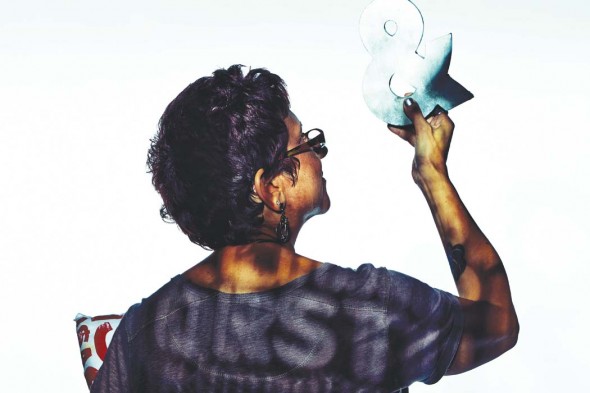