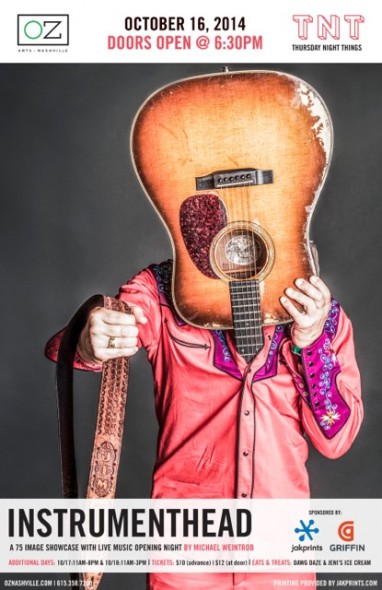 Oz Gallery’s upcoming Instrumenthead exhibition, Oct. 16-18, in which they will hang 75 four-foot tall prints – including 50 Nashville Musicians – at their space has me thinking back to how this all started.

Inspiration for Instrumenthead, which now includes over 400 artists, struck in 2006 on the heels of advice I’d received from the editors of Vibe, Spin and Rolling Stone who all imparted on me the same idea – if I wanted to follow up my performance photography success with portraits, I needed to focus study not only on creating a technically sound studio image but finding my own creative voice.

Starting with George Porter Jr, the first willing participant of the seemingly absurd request to “Stick your bass guitar down your shirt upside-down so it covers your face,” the difference immediately struck beyond the visual – the emotion remained. The essence of George permeated through and this emboldened me to try again with the next round of artists. I found myself compiling these images as supplement to whatever portrait work I was doing by asking, “How are we going to tell your story so your fans know it is you without seeing your face?”

By 2008, I had compiled a sizable body of work and came across James Mollison’s book, The Disciples, in which he’d photographed bands’ fans leaving the viewer to guess the artists. Dolly Parton fans resembling her, ZZ Top fans with big beards and so on. I knew then my own “musical guessing game” was on to something so I hit the road in search of icons to capture.

Setting up studio in venues across America like Seattle’s Lo-Fi, Denver’s Red Rocks, Tipitina’s in New Orleans and Chicago’s Mama Rosa’s Blues Club, I lured local musicians with free portrait work of their choice if they would also step into their Instrumenthead. A collaboration with the great George Wein kept me going with the Newport, Monterey, Chicago, Paris and New York Jazz Festivals and led to a month-long stint photographing the Barcelona Jazz Festival. The catch in Barcelona was the promoter could not afford my travel but instead put me in touch with the U.S. State Department who agreed to sponsor my trip in exchange for my putting on my first exclusive Instrumenthead exhibition. Hosting an exhibition of 16 six-foot tall Instrumentheads, guest lecturing at the Institute and shooting 55 concerts in five weeks was one of the most challenging and amazing experiences of my life and I then knew putting myself out in the world in this way was what I wanted to do.

My relationship with Nashville has been developing over the past year after a childhood friend from my hometown in nearby Birmingham, Alabama, knowing I wanted to be closer to home so I could spend time with my ailing mother, set me up with the producer of the PBS series, Bluegrass Underground shot in nearby McMinnville, Tennessee. After the shoot there and feeling right at home, I rented photographer John Scarpati’s studio and went on faith that word would spread. By the end of the week I’d shot over 25 respected Nashville musicians like Sam Bush, Muriel Anderson, Peter Keys, Tim O’Brien, Darrell Scott, Victor Wooten and Jeff Coffin and have since come back three times just to capture more of the artist defining Nashville.

The passing of my mother in early 2014 helped me decide to relocate to the Music City and my relationship with the city is getting stronger by the day. I give great thanks to everyone who has welcomed me so warmly; the Oz gallery hosting my first local exhibition of Instrumenthead, my subjects – some of which will be performing at Oz – and Griffin Technologies for providing iPad stations throughout the exhibit to display artist-related multi-media and biographical information. I hope you’ll come celebrate every single artist lending their essence to this exhibit at Oz and on November 1st at the Arts Company during the Arts Walk as well as in the future. I also give tremendous thanks to my print sponsor, Jakprints, for helping once again bring these images to life.

Click here for more information about the Instrumenthead exhibition, Oct. 16-18 at Oz. For more about Michael Weitrob visit his website and read the story we published on this series.