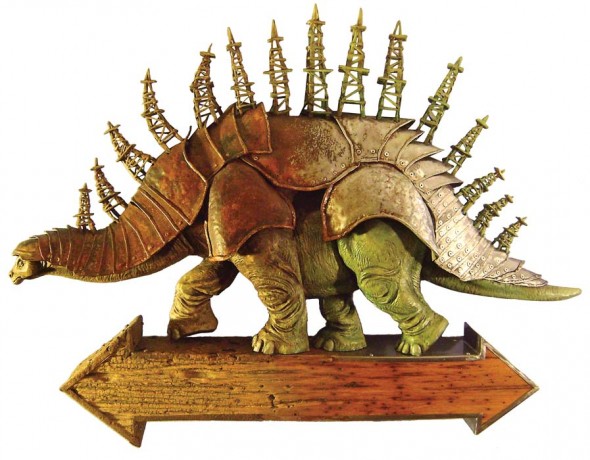 When Franklin-based artist P.E. Foster begins work on a piece, it’s largely a subtractive process—a loud, messy subtractive process. Sawdust accumulates on his shoes at an impressive rate, and the smell of scorched wood permeates his studio, a detached two-car garage that hasn’t housed a vehicle in years. A year-old, yellow, short-haired pup named Macy knows not to get too close when Foster dons goggles and brandishes any of his handheld grinders with spinning blades that effortlessly gouge trenches into hardwoods.

Foster, 56, is working on his latest work-in-progress, Drum Roll, a wood relief that features a wild-haired caveman treadmilling atop a barrel of oil afloat in an ocean of U.S. currency. It’s roughly a 30” x 30” x 4” block of boards glued together into which Foster is grinding away the parts that resemble neither a Neanderthal, a petroleum container, nor a sea of greenbacks. 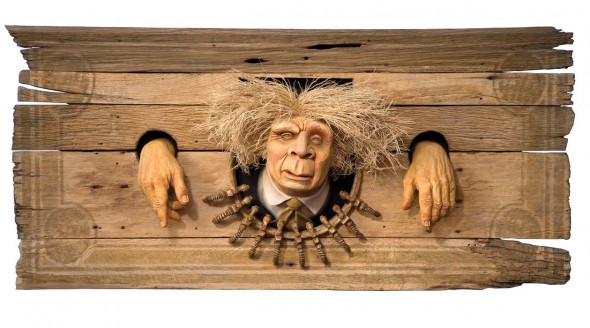 “Do you want to try it?” Foster asks. Macy’s eyebrows shoot upward. She’s right. It feels ominous to accept the grinder, as if pulling the trigger could unleash a flame-filled hellscape so quickly that gathering dismembered body parts would be all but impossible. “Probably shouldn’t.”

Macy exhales so heavily that something resembling “ohthankgod” bursts from the back of her throat.

It should come as little surprise that Foster carves, paints, and fabricates social awareness into most of his pieces. After all, he makes his living as a razor-witted illustrator for national publications, including The Wall Street Journal, The New York Times, Fortune magazine, Business Week, and The New Republic. Foster says he gained an appreciation for natural resources growing up in Utah and became increasingly aware of the need for conservation while working a summer job with the U.S. Forest Service for nine consecutive years. He earned a bachelor of fine arts in painting from Utah State University in 1982, and three years later a master of fine arts in printmaking from Wichita State University. 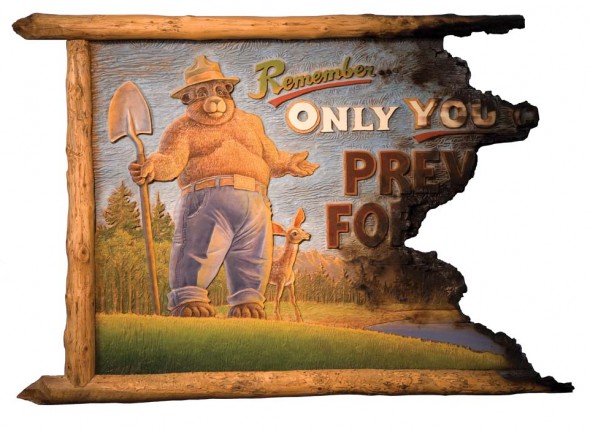 Another anti-oil piece, Petrosaurus features a wood-carved, humpbacked dinosaur with a long neck wearing plates of armor with fifteen oil derricks boldly stemming from its spine. “I knew that if I did not include the oil derricks on top, that dinosaur could have been open to interpretation without directly addressing the oil companies. I couldn’t resist getting those in there,” Foster says. “A lot of people don’t like that kind of specificity, and I understand that. I came up through the fine arts, and that type of specificity was a very bad strike against you. I know that whole way of thinking. I’m just being who I am.”

The dinosaur walks along a hefty, bi-directional arrow. The double arrow itself is a metaphor—its left side is worm-riddled, tired, and weak; its counterpart on the right is polished and beautiful, perhaps suggesting a carbon-neutral future full of hope and promise.

“Overall it’s a piece about progress and regress and whether we’re on the right path,” Foster says. “Are we progressing toward that brighter tomorrow, or are we slogging along in the old ways?” He answers the question with exclamation points by having the dinosaur mindlessly amble along the well-worn path of habit toward the archaic arrow, consequences be damned.

In another of his works, Wake Up Call, Foster takes on mortality. The left of the frame is tastefully imbued with child-friendly trinkets such as marbles, cars, and wooden blocks, while the frame’s right side is scalloped, golden, intricate, and traditional. The frame’s seamless transition between the distinctly different styles speaks to Foster’s impressive skill with tools as well as his strong vision for each piece.

“The frame itself undergoes a metamorphosis,” Foster said. “I wanted the left side to be lyrical, playful, and organic, and as it moves to the right, I think of words like ‘orthodox’ and ‘habituated’ and ‘conformity’ and ‘traditional.’ ” 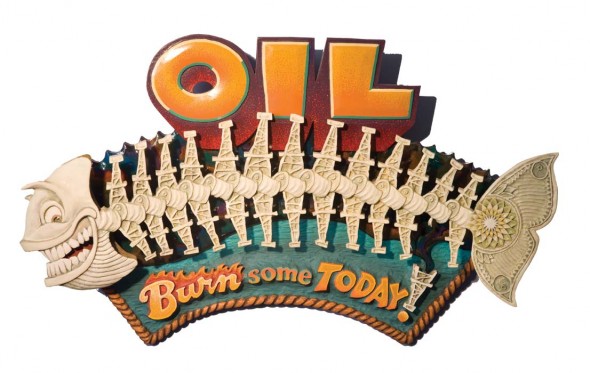 On the childhood side of the work—the piece is largely carved from a wood block—is a simple line drawing of a rocking horse, while the adulthood side features an elegant representation of a rocking chair. Separating the two, unbound by the limits of the frame, is a bright-red rooster crowing as the sun slips above the horizon behind his perch. At the bottom of the frame, the work’s sobering, in-your-face theme is literally spelled out: “It’s later than you think.” Foster said he was compelled to explore man’s impermanence when his lifelong best friend succumbed to cancer at the age of 54.

“Cancer hit him, and he was gone within a year,” Foster says. “It came with a fury, and it gave me a slap of sobriety. That’s what gave birth to that.”

Foster’s work will exhibit for the first time publicly November 22 at Leiper’s Creek Gallery in Leiper’s Fork. For more about the artist and the exhibit, visit www.leiperscreekgallery.com and www.pefoster.com. 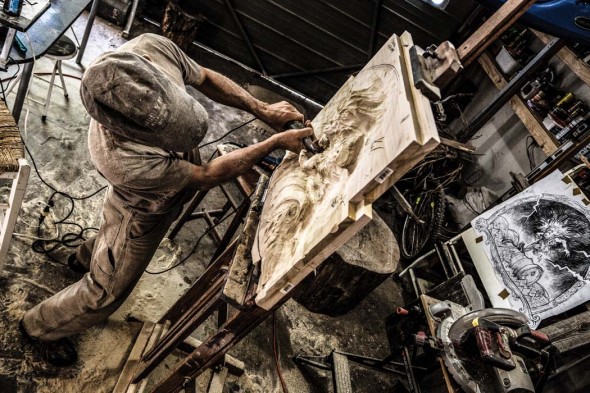 P.E. Foster at work in his studio. Photograph by Bill Hobbs