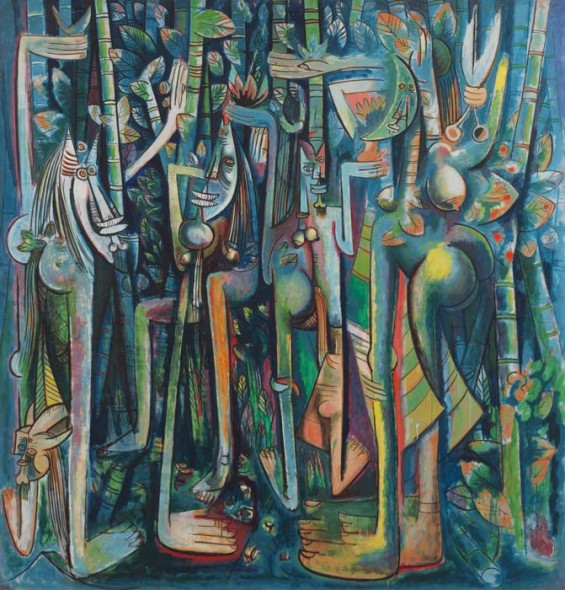 If you know of the artist Wifredo Lam (1902–82), then it is likely that you are familiar with his most famous painting, The Jungle, 1943. For many years the painting was installed on the ground floor of the Museum of Modern Art, New York (MoMA) opposite the entrance to the administrative offices and library, on the way to the coatroom. The placement of the large work (7 feet 10¼ inches x 7 feet 6½ inches) in the lobby drew sharp criticism in 1988 from John Yau, who claimed that neither the artist nor his style fit neatly into the canon of Western art history. The work was marginalized and left downstairs like a delivery boy.

Wifredo Lam was born in Cuba of Spanish, African, and Chinese ancestry. In his 80 years, he lived in Cuba, Spain, and France and traveled to many other countries, including Haiti and the United States. He studied painting in Madrid before moving to Paris in 1938, where he met Pablo Picasso and André Breton. He absorbed the tenets of Cubism as well as Surrealism. He also associated with authors and poets Federico García Lorca, Alejo Carpentier, Gabriel García Márquez, and Aimé Césaire.

By the time he returned to Havana in 1941, he had developed a style of painting that incorporated aspects of Surrealism, Magic Realism, Modernism, and Primitivism. Infusing his work with African and Caribbean symbolism, including imagery related to Santeria, a hybrid religion practiced in the Caribbean, Lam was an early advocate for and practitioner of multiculturalism and multi-ethnicity.
The shift in appreciation for Lam and his art began in earnest in the mid 1980s after MoMA presented Primitivism in 20th Century Art, an exhibition that rallied vocal opposition to entrenched patterns of co-opting the aesthetics of foreign cultures into mainstream formalism. A younger generation of critics and historians, such as John Yau and Lowery S. Sims, author of Wifredo Lam and the International
Avant-Garde, 1923–1982, came on the scene, establishing greater sensitivity to diversity and the marginalization of artists of color. It is not coincidental that many of these critics and historians walked by The Jungle every time they used the reference library at MoMA.

The Jungle is filled with fantastic creatures with characteristics of humans, animals, and plants painted in blue, greens, yellows, and ochre on paper and mounted on canvas. Oversized feet, hands, buttocks, and breasts are both connected and disconnected from pole-like forms layered over a field of sugarcane, the Cuban crop once worked by African slaves. There are no jungles of dense foliage on the island of Cuba. Lam was referring, instead, to a psychological jungle of the human condition. Lam felt he had an affinity for African art and iconography, but he also embraced the Surrealist objective of incorporating primitive art as a means of subversion. Lam’s goal was to paint the drama of his country by expressing the spirit of the diverse cultures in Cuba. He said he felt he could act as a Trojan Horse who could encapsulate the element of surprise “to disturb the dreams of the exploiters.” His originality and masterful fusion of visual and literary sources are at last enjoying well-deserved appreciation and visibility.