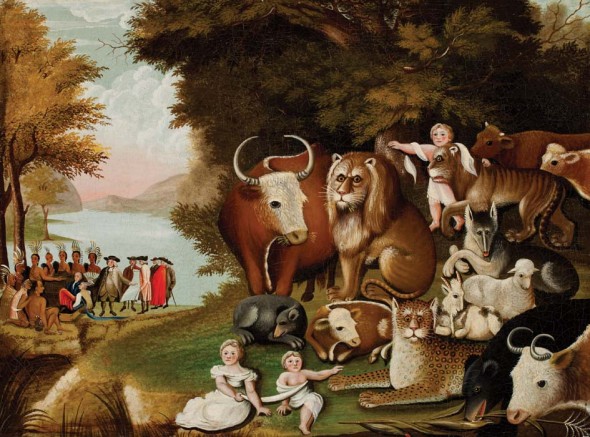 Between 1822 and his death in 1849, Edwards Hicks painted over a hundred variations of his famous Peaceable Kingdom. Hicks, a Quaker preacher and sign painter, found inspiration in chapter 11 of Isaiah: “The wolf also shall dwell with the lamb, and the leopard shall lie down with the kid, and the calf and the young lion and fatling together; and a little child shall lead them.” In early versions of the image, this text is painted in a border. Hicks experimented with different ways of expressing the prophecy and the relevance of the message for nineteenth-century American life. In later versions of the Peaceable Kingdom, including the Worcester painting of 1832–34, Hicks inserted a vignette documenting William Penn’s treaty with the Indians. Penn had introduced Quakerism into the Pennsylvania colony, and Hicks saw Penn as the embodiment of a virtuous life, which included self-discipline, humility, modesty, and harnessing of our animal instincts to live in concord.

Symbolism within the paintings is largely conjecture, but what is consistent throughout the series is a tension between the subject matter and a tenuous peace. Each depiction conveys a delicate balance between forces that wield power and emblems of pastoral serenity. It has been argued that Hicks’s depictions of the king of beasts may have alluded to Imperial England or the English Quakers, which were at the time both at odds with the American Quakers.

The enduring popularity of Hicks’s art resides neither in his virtuosity nor even accuracy, but rather in his complete lack of pretension. His art combines the spiritual with the material in a direct manner that recalls humble nativity scenes where beasts of burden look adoringly at the Christ child, the embodiment of God’s majesty made man. Among practitioners and devotees of modernism, Hicks’s style is heralded for its simplicity. It is not coincidental that several of the leading collectors of Shaker and Quaker art were also the principal benefactors for major institutions of modern art in America.

Abby Aldrich Rockefeller, a collector of modern art, folk art, decorative arts, and Japanese prints, was a driving force in the founding of the Museum of Modern Art, New York, as well as Historic Williamsburg, home of the Abby Aldrich Rockefeller Folk Art Museum, which was named in her honor. She also supported other art museums, women’s causes, Spellman College, the YWCA, and International House of New York. Her eclectic taste embodied Hicks’s hopes for America, that we could all find favor, celebrate our differences, and live in peace. Happy Thanksgiving.