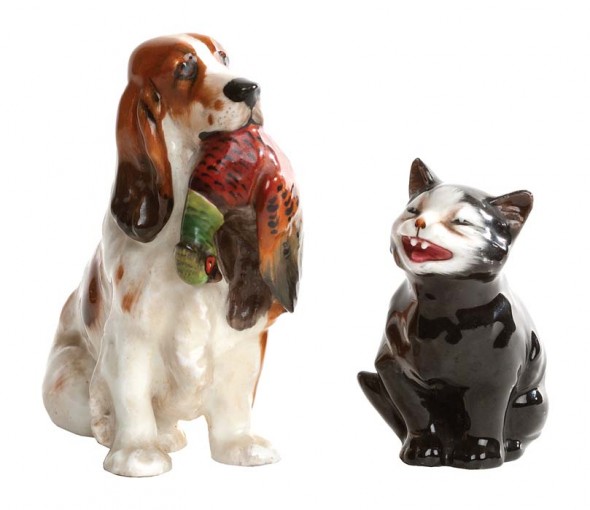 The Figurine, Dustable Curio, Porcelain Novelty, Knickknack: we all reside with one or two or . . .

Since its 1815 founding in London’s Lambeth district, the Doulton Company (Royal Doulton from 1901 when King Edward VII awarded the factory a Royal Warrant) has produced a wide variety of ceramics, from salt-glazed sewer pipes to tableware to a seemingly endless number of collectible figurines.

The Doulton marks are many and varied, but most follow the same theme. Dating Royal Doulton products requires careful consideration. This is a collectible that the saying “the devil is in the details” truly applies to, as a short production run or limited color scheme can change a value considerably.

By example, the “HN” mark heralds the time when Royal Doulton’s figurine production took off, in 1913, under the direction of modeler Charles Noke. It was his belief that Royal Doulton figurines could be as popular in the twentieth century as the Staffordshire figures had been in the nineteenth century (think matched pairs of King Charles spaniels flanking a fireplace mantel).

Starting with 1912’s HN1 “Darling”, a small child dressed for bed, each figure was given an “HN” number. This numbering system continues today, and more than 4,000 HN numbers have been assigned to date. There are nuances to the numbering system to consider: in some instances HN numbers indicate colorways and not subject matter.

The “HN” mark is just one of many Doulton marks—there are many in their production alphabet—and then there are the myriad backstamps (typically pictorial), date codes, and artists’ monograms to consider.

It is always wise to understand that when collectibles are manufactured in large numbers, values are typically suppressed. Collectors with hopes that their collections will appreciate in value would be wise to consider at least three factors that influence the values of vintage Royal Doulton figurines. Typically the figurines that command the highest prices on today’s market would be those produced pre World War II (age), may have been of a subject matter that was not received well in its day (demand), and any figurine that was produced for a short time with variables in color (limited).
As for the subject of condition, in the case of these collectibles condition is extremely important. Chips, cracks, and breaks render them simply shelf décor.