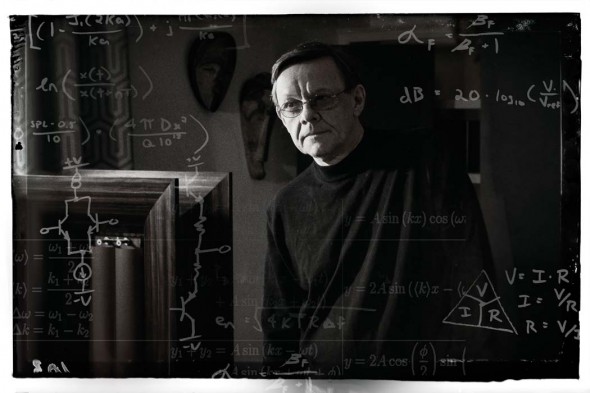 Every audio system is a sonic equation, and the parts that make up the chain have to be carefully put together, if the system is to sing.

In 1974, $3,000 was a lot of money. But by the time Cornell University student Konstantin Gregg-Saad managed to squirrel away that much, he knew exactly how to spend it. This was the 70s, after all. Naturally, he bought his first stereo system—a really nice one.

The mysterious circuitry filling those boxes of wood and metal brought recordings to life in a way Gregg-Saad had never imagined. The emotional connection with the music was breathtaking.

“I was hooked. Soon I started building gear from kits,” he recalls. “Then I progressed into building my own gear or modifying everything I could get my hands on. I learned that changing even the smallest component can have a profound influence on the sound. It was, and still is, a wonderful hobby.”

About ten years out of college, he saw an opportunity to connect even more deeply with the gear he obsessed over. Soon many of audio’s most elite manufacturers had found themselves an enthusiastic Swiss distributor.

“I still had my corporate job, so I hired a couple of audio geeks to run the audio business for me. My banker wife graciously did the books. This went on for ten or twelve years, till I got a promotion that required a move from Geneva to London. At that point, I figured I couldn’t keep doing this other thing on the side. It was time to move on.”

Fast-forward to 2011. A high-flying business career now comfortably behind him, the Belgian-Swiss tinkerer and his wife decided to leave Europe for an unlikely retirement destination—his wife’s home state of Tennessee.

“We came to Nashville, looked around, and said, let’s try this. After thirty-five years of living in Switzerland and London, here we were in Music City. To keep busy, I started coaching and mentoring start-ups and advising smaller firms on strategy. But I still needed something more to do. It was actually my wife who suggested I get back into the high-end audio world, because she knew how much I loved it. It is also true that when I retired after years of being away from home on business, she was not used to having me around 24/7/365.

“My return to audio involved advising and assisting manufacturers develop and position products for the US market. Here, and as with my involvement with coaching and mentoring start-ups and advising on strategy, my contribution is strictly pro bono, or what is locally known as paying it forward. This was the easy part. My second audio project, Atelier 13, was another matter.

I had no idea what Nashville’s audio scene would be like or how it would respond to the Atelier 13 concept. It was a grand experiment.

“The idea was to make this not a commercial space, but more of a cultural audio place—actually my space—where I could have people over, share my audio experience, and make new friends. A place to hang out, where the emphasis most definitely is not on the sale. The commercial side is separate and is done online via our website. After all, I didn’t come into this with the mindset that I needed to make a living from it. I was free to focus on, and share, what I loved most about audio—the music.

His solution? Locate the venue in a dedicated residence on a quiet cul-de-sac, where he could be “at home away from home. I was wanting a man cave for myself anyway, and, after looking at forty houses, I found this one. It has the right walls, the right shape of rooms, the right number of rooms. And it isn’t far from where I live.”

When I suggest that a music industry hub like Nashville must be an ideal location for a concept like Atelier 13’s, Gregg-Saad smiles and shakes his head. “The reality is that one doesn’t follow the other,” he explains. “One group makes the music, and the other one listens to it.

“The truly hard-core music lovers embrace all genres of music—those I’ve met anyway. They also tend to love art. Dance. All forms of creative expression. Many happen to be intellectuals. They are thinkers. They are feelers. All of it is stimulation, whether to the ears or to the eyes, and ultimately to the soul.” And that explains why so much of the gear filling the place looks like art.

“Every audio system is a sonic equation, and the parts that make up the chain have to be carefully put together if the system is to sing. This is true whether one’s investment is $4,000 or $500,000. Most music lovers have never experienced what such singing systems sound like and the sheer pleasure they can bring to life. At ‘Atelier’, the French word for workshop, we’re all about solving sonic equations and bringing this greater musical dimension into people’s lives.

“One of the most painful aspects of bringing a piece of audio gear into your living room was that they always tended to be ugly. It wasn’t till very recently that industrial design became a requirement. Today, a phone needs to look decent. A computer has to look nice. Even the coffee machines look increasingly fantastic!

“I think audio gear has to combine form and function. To the extent that you can actually give a functional thing a form that is pleasing, more and more this is happening. Manufacturers are finally beginning to understand that there is this other dimension.”

Increasingly, so are the music lovers.