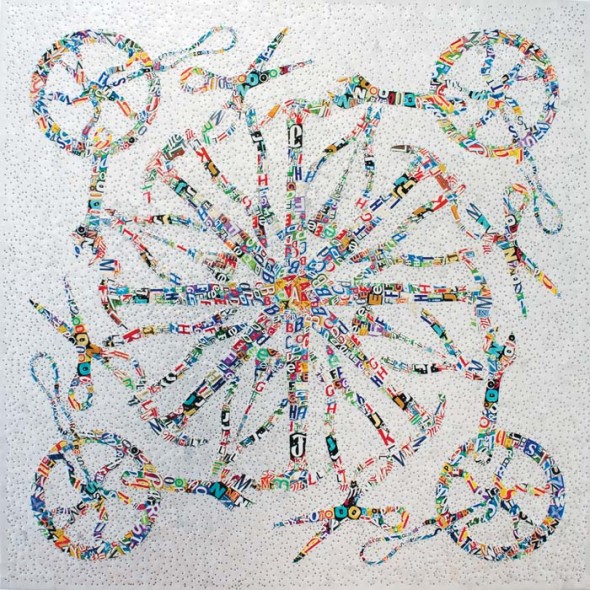 Of all of Miranda Herrick’s painstakingly intricate mosaics made out of deconstructed aluminum cans, the elegant woman at Bennett Galleries approached the one made of squares of Dr. Pepper cans. Standing appraisingly before the shiny construction, she pronounced—in one airy breath—the reason for this being her favorite piece: “Dr. Pepper is my favorite soda.”

There are reasons both complex and straightforward behind the medium for which Herrick has become known. The notion of human mass consumption is a point Herrick has made in interviews.
“We are what we consume, so we have these products around us all the time,” Herrick says. “But what I like about translating my designs into the aluminum can or into any post-consumer recycled object is how much it is about how it can accumulate.”

For her 53” x 53” piece Megabyte, Herrick composed sixteen panels with the same UPC code from 1,024 deconstructed cans. “It was pretty darn easy for me to gather up 1,024 of the same UPC code,” Herrick says. “Even those of us who recycle, we’re getting it out of our house, so we don’t think about how it adds up.”

That said, it is a truism that people like what they like. So beyond the deeper meaning of mass consumption in Herrick’s mosaics, viewers feel an almost talismanic affection for the cans themselves. On some level, soda cans represent a collective American consciousness. They’re democratic; they symbolize togetherness, and, at their most basic, they quench our mass thirst with that whimsical fizz of sugary bubbles, which in themselves are reminders of childhood.

On another level, viewing Herrick’s mosaics becomes almost a game, a puzzling out of which type of cans created each one. American Quilt is comprised of Pabst Blue Ribbon and Miller High Life cans. The UPC codes in Megabytes are from seltzer-water cans. The 36” x 36” Tools is a mind-blowing mix of letters from various cans, from Mello Yello to Coke; it looks like an aluminum ransom note.

Herrick says, “It’s interesting when people look at the work made out of cans and they try to identify them. And sometimes there’s nothing to go on other than color. Sometimes there’s a bit of pattern.” What are Herrick’s favorite cans? “Bud Light is a lovely shade of blue. Coke is nice for the red.” 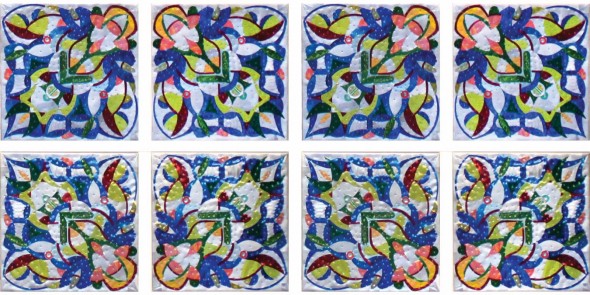 In December, Herrick’s exhibit Works and Days was on view at Bennett Galleries in Nashville’s Green Hills. In January she is debuting Miranda Herrick: New Works at the Planters Bank Peg Harvill Gallery at the Customs House Museum in Clarksville.

Herrick graduated from Austin Peay State University in Clarksville with a bachelor of fine arts degree with a concentration in drawing and ceramics. She has used aluminum cans as a medium for several years. There’s an inherent beauty in such shiny shapes; any self-respecting magpie would surely feather her nest with them.

But Herrick has also made her point about mass consumption with less attractive bits of detritus, including those flimsy plastic bags used at every store. From Walmart bags, she made an old-fashioned “rag rug” with dimensions of twelve by ten feet. The kicker? Its weight. “It weighed over one hundred pounds,” Herrick says. “And those were just the bags that I, and a few of my friends and co-workers, saved with regular shopping in the course of two to three years.” 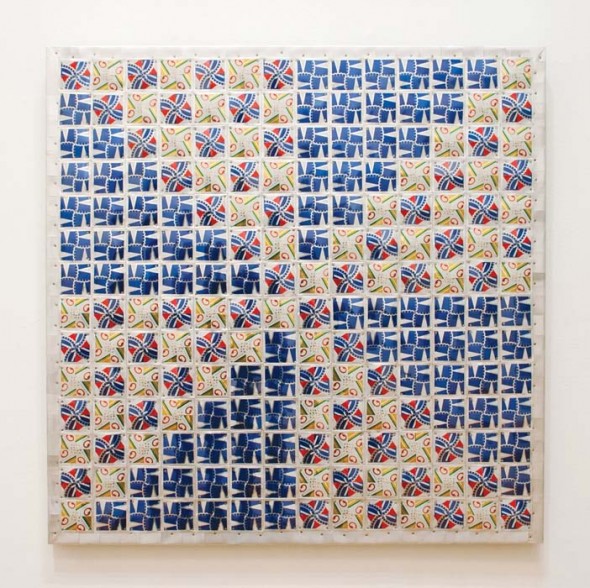 A question Herrick often gets asked is about how much time such intricate mosaics take her to make. She confesses she has to “very tediously cut all the shapes out,” but notes that there is an almost meditative quality to the process.

“I like prepping my cans,” she says. “I cut off the tops and the bottoms. That’s very time intensive. I could spend the whole weekend plowing through bags and bags of cans that people have given me.”

When putting together her aluminum-can canvases, Herrick uses steel nails to connect hundreds or even thousands of tiny shapes. “I think of the nails as stitches,” she says. “I see these things as quilts in a way.” She laughs. “I find it very soothing to do things repetitively, luckily. I wouldn’t be able to do it if I didn’t enjoy it.”

Miranda Herrick: New Works, sponsored in part by Nashville Arts Magazine, is open at the Planters Bank Peg Harvill Gallery at the Customs House Museum in Clarksville January 8 to February 1. Herrick is represented by Bennett Galleries. For more about the artist, please visit www.bennettgalleriesnashville.com, www.mirandaherrick.com, and www.customshousemuseum.org.