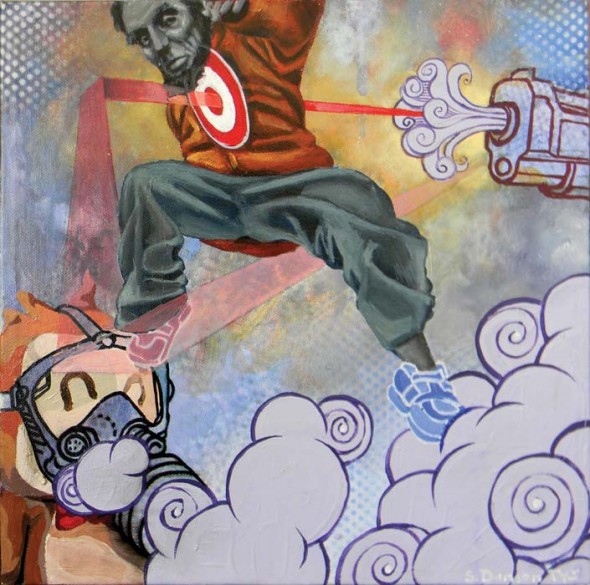 The Rymer Gallery through January 31

The recent events in Ferguson and New York involving the killing of two black men by police has brought up serious questions about equality and freedom in the contemporary United States. Protests, 24-hour news coverage, and debates on social media have permeated our daily lives for months. To cope with and process these important issues, painter Sam Dunson has done what he does best—making undeniably thought-provoking art.

His new paintings contain familiar Dunson imagery: smoke, flowers, fur suits, and masks placed in satirical juxtapositions that require careful examination to unpack. While Dunson uses symbolism throughout his work, he enjoys learning how others interpret his art. Despite the very specific meaning he imbues, he notes, “I appreciate what others bring to my art. I love the conversation.” Considering his visual language, the works quickly reveal their complex, sincere message.

In It’s Like Shooting Dreams in a Barrel, Dunson tackles the intangible nature of freedom and its power to create yearning. He combines smoke and clouds to represent a paradox: the absence of liberty chokes like the smoke escaping from the gun, but also once freedom is in grasp it is like holding onto a cloud; it is difficult to be sure you have it. You see it, know it exists, but you still wonder what having freedom feels like. The central figure, a composite Abraham Lincoln/contemporary young black man, suggests the struggle for equality as a historical constant that comes and goes as though lost within the Bermuda Triangle. He’s jumping up to reach for the clouds unaware of the target on both sides of his body. The threats of corruption and violence are enemies of liberty. 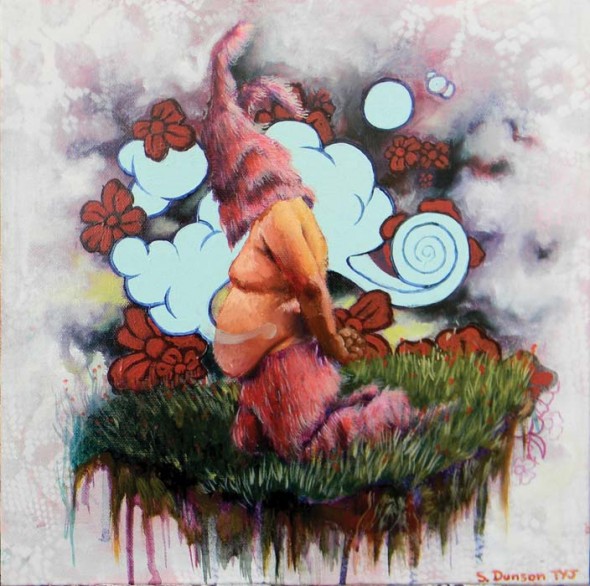 The idea that black Americans should continue striving for equality is only half of the story that Dunson addresses. For him, “Freedom is a responsibility and gift that is right in front of us, but we are all obliged to recognize it.” In There Are no Apologies in the Age of Sacrifice, the artist depicts the central figure in fur, a luxury trapping that can seem frivolous in the grand scheme of life. The rabbit mask implies the rapid proliferation of types and ideas. The man presented kneeling holds his unbound hands behind his back as clouds and smoke surround him. If he were to simply stand up, remove the mask, and grasp the freedom in front of him, he could avoid choking on the toxic smoke (loss of freedom.) It’s all right there, but his decision to self-impose sacrifice reveals that the lack of desire for change is a true barrier to independence.

Sam Dunson’s art is featured in The First 100: New Works from Selected Rymer Gallery Artists at The Rymer Gallery through January 31. For more information, visit www.therymergallery.com.