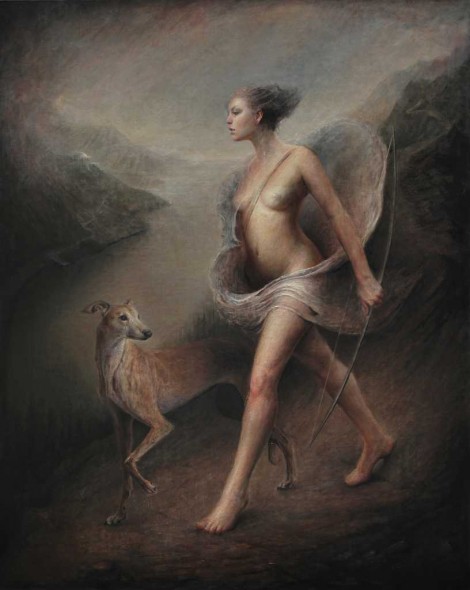 Painting for a Song

It’s impossible not to feel a visceral shock when turning from Todd Williamson’s highly abstract depictions of ethereal emotions and sounds arising out of rigid, mathematical, underlying order to Luke Hillestad’s obsessively and unapologetically traditional figurative, narrative paintings in the manner of Caravaggio, Rembrandt, Titian, and Apelles of Cos.

From March 7 to 31, The Rymer Gallery premieres Williamson’s No Rhyme or Reason series concurrently with their continuing exhibition of Hillestad’s Anima series. For curator Herb Williams, this dichotomy is part of a concerted effort to deliver the most engaging aesthetic experience possible: “Looking at these two artists, they’re completely different. It really is like night and day. . . .  I try to think of things that would make me want to get off the couch. You’ve got to create something that has power, something that’s different.”

Williams thought back to his adolescence to explain his creative process. “I grew up in the cassette-tape world, and one of my favorite things to do as a kid was to make mix tapes for my friends,” he reflected as an eclectic mix of contemporary hits played over the speakers. He went on to identify his approach to curating visual arts as “a variation of that.” As Williams could tell you, to make a great mix you need a memorable track list, so he’s featuring two of the most captivating, if utterly dichotomous, artists of their respective scenes. Despite the apparent clash, Williams has found in these artists a commonality in their intense dedication to depicting the steady pulse of breath and life and the universally human emotions that unite us. 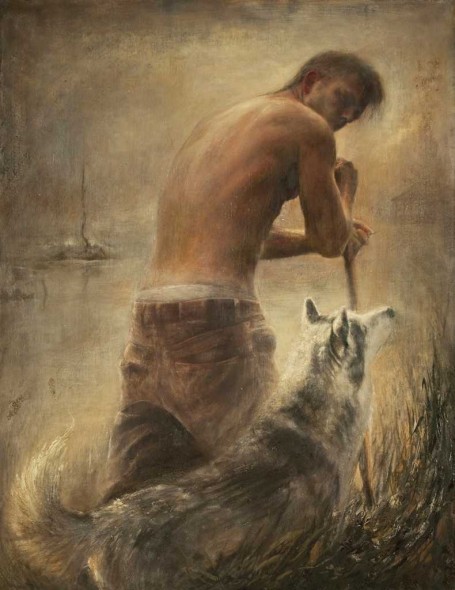 Williamson, a Cullman, Alabama, native born in 1964, has exhibited works worldwide and currently serves as the Arts and Cultural Affairs Commissioner of West Hollywood. His works are visions of the ephemeral human spirit that reverberates in thoughts and dreams. The colors and forms on the canvas vibrate in time with the emotional energies that emerge from below the depths of the ego, traced along the same waves that carry light and sound.

The canvas itself is an extraordinary, unifying element in Williamson’s body of work as the artist chooses to paint his intangible forms on strictly partitioned surfaces. The immaterial seems to give way to the material, or vice versa. These grids are part of his synesthetic artistic vision. “The music staff is the perfect metaphor for my work,” he explains. “I believe that color, music, and numbers are all connected and must be addressed.” He goes on to say that “[the music staff] is the constraint that holds the idea and controls the chaos of the color and movement. . . The grids are what controls these emotions.”

Hillestad is a resident of Minneapolis, Minnesota, born in 1982, but his work is wildly different than those details might lead one to believe. Hillestad found the “demand for originality” in contemporary art oppressive, so he elected to choose freely from his preferences, “no matter how passé, nostalgic, and kitsch they are.” Discussing his commitment to following directly in the footsteps of those who most influenced him, he says, “I am quite serious when I say that if my work is distinct from Nerdrum, Rembrandt, or Titian, it is accidental.”

Hillestad has devoted himself to realizing timeless narratives in his art, “the stories that repeat regardless of geopolitics.” The title of his new series, Anima, comes from the ancient Latin word for breath and life. “I want to paint characters that breathe and narratives that are living,” he explains. He brings his characters to life through “deliberate” and “earnest” figurative painting, recognizing that the process of creating and viewing art painted in the classical tradition “gives us practice in compassion.”

The artist uses his empathy and mastery of the human form to evoke a powerful sense of drama and character. Grotto, a depiction of “returning home after a catastrophe—the ritual of forgiveness,” carries extraordinary emotional weight. The artist’s skillful use of chiaroscuro pairs with the subject’s posture and wide eyes to suggest “willingness,” while a wild bobcat by her side symbolically portrays her “primal urge to fight or flee.” These elements converge to create a narrative told with tremendous pathos as she emerges from a troubled past. “With Anima,” Hillestad says, “I can pick the traits I admire from among the breathers—be they characteristically human or animal.”

Todd Williamson’s No Rhyme or Reason series and Luke Hillestad’s Anima series will be on exhibit at The Rymer Gallery March 7 to 31. For more information visit www.therymergallery.com.