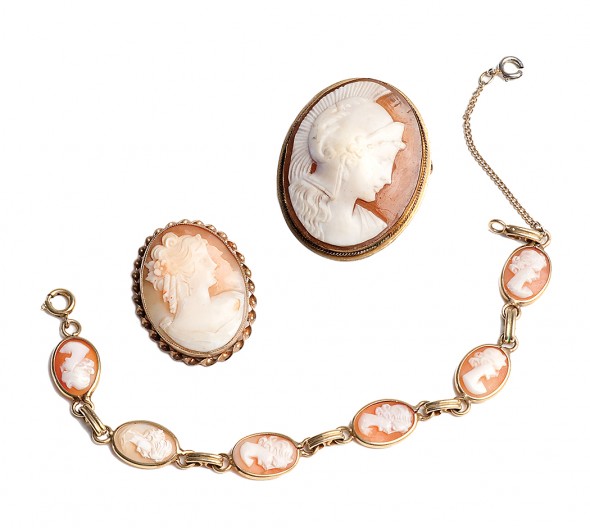 Two pins and a bracelet
(beige and white cameo shell)

Each summer more than sixty Antiques Roadshow appraisers, in two dozen areas of expertise, get the opportunity to examine more than 60,000 antiques and collectibles. Among the dozen or more types of objects most frequently seen are kitchen clocks, vintage sewing machines, bibles, rocking chairs, open-face pocket watches, arrowheads, and shell cameos.

Shell cameos are sentimental favorites; however, the cameo’s significant history and importance in the world as an adornment and collectible revolve around the centuries-old skillful use of stone, not shell.

The art form, popular since antiquity, has historically favored the use of a wide range of gemstones and other hardstones. Shell, while easier to carve, offered the carver only two calcified layers to explore and never achieved the same prestige as hardstones.

The faces of cameos have been present for hundreds of years, dimensional adornments pinned to necklines, lapels, and waistcoats. In 334 BC, the Hellenistic Greeks were the first to excel at carving small hard stones in relief. The favored images were those of deities or other talismanic signifiers. Typically mounted in gold and often set in rings, the adornments attained a cultic significance in classical antiquity. Roman wearers used cameos to advertise their taste and wealth and to profess their devotion to gods or political forces. Each succeeding age followed suit. Medieval cameos venerated religious subjects; sixteenth-century gem carvers devoted themselves to classical subject matter found in the natural world, and later baroque cameos favored vigorous muscular forms, and so on.

The trend for (sea) shell cameos began in the mid-nineteenth century. Mass produced, they were sought after as an inexpensive souvenir from a European “Grand Tour” and later by servicemen stationed in Italy during WWII. For about a hundred years, 1840–1940, the shell cameo was the must-have piece of jewelry.

The motifs of this period, in addition to the classical subjects, depicted Victorian-styled goddesses and well-known personages of the time. These cameos were often sold unmounted, left to the purchaser to have them set in gold or gold-filled mounts upon their return home.

On today’s market, with so many shell cameos in circulation, the factors that would set one apart from the rest would be: crisp detail, a wonderfully imaginative motif, historic significance, or a fancy gem-set, precious-metal setting. A fabulous example of the extraordinary is the circa 1835 helmet-conch-shell cameo of Andrew Jackson by American carver George Jamison. It is held in the collection of New York’s Metropolitan Museum. Images of this exquisite cameo can be found at www.metmuseum.org.

Back in the league of “sentimental” value, each of the shell cameo adornments pictured here would have a retail replacement value of less than $100.