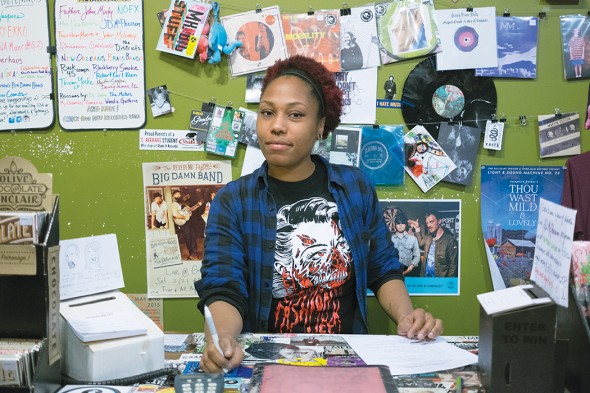 Kathryn Edwards, founder of The Other Booking. Photograph by Sarah McDonald

Scattered all over town in basements and back patios lies a different breed of performance space. House venues seat as few as 15 people and play host to bands too new or too challenging for the likes of the Exit/In or the Mercy Lounge. Kathryn Edwards, founder of The Other Booking and former resident at the influential house venue The Other Basement, is one of the city’s most passionate and tireless house show promoters, and she doesn’t get a dime for it. Kathryn and I talked about Nashville’s DIY music scene, show-booking burnout, race and representation, and much more. The profile is in the April print edition of Nashville Arts. Here is the full interview:

Can you tell me some of your experiences booking shows at The Other Basement and how that evolved into The Other Booking?

I lived at the Other Basement from 2011-2014, and I booked shows there for almost the last two years I lived there. Many people would come to me with set lineups or somewhat-filled bills that I would assist in filling. It really just varied. Often times, many bands would go directly to us to book the show, which is where I really got my feet wet with the whole process. There were many ups and downs to it, sometimes the punk house has a shitty P.A., sometimes the bands are more rowdy and destructive than anticipated, sometimes (though rarely) they were divas who thought they should get 5 star treatment in a dirty basement.

Two goals that have carried over since moving out is to enjoy the satisfaction of providing interested people with a space to play and to give them enough money for their tour needs at the end of the night.

The Other Booking came out of necessity as our property managers decided they were not going to allow us to renew our lease in July 2014. I had a realization that what I had been doing the last couple years had become fulfilling and necessary to have a healthy and active underground music scene. The loss of a major DIY space with the Other Basement wasn’t going to stop me from still providing bands with opportunities in Nashville. Now, I primarily try to book at DIY spaces (houses that do not charge promoters/bands to use their spaces) because the energy that comes from the crowd is extremely natural and unique and, I think, preferred. But I can also put my feelings toward DIY culture aside for a larger band that I think a bigger venue and crowd would suit. I still maintain my DIY spirit in that I have never taken a cut or required payment from the booking that I do. Venues need to get paid to pay their employees to run sound or do door, but I’ve never felt that what I do should turn into a bonafide “business” in that sense. I have jobs to pay my bills. My booking is a passion.

Who are some of your favorite local bands and venues?

Some of my favorite bands to see at the moment are Bleed the Pigs (sludgey grindcore / powerviolence), Forest of Tygers (hearing is optional the next day, plus Rachel Valosik is a badass on the drums), Western Medication (I’m a sucker for slightly gothy post punk), and Watcher (a post hardcore outfit filled with close friends of mine that I’ve seen grow as musicians and it is beautiful).

A couple new bands on the block that I’m going to try to get some shows for are Date Night (garage punk) and Shadraq (thrashy hardcore). They are extremely different bands filled with high school kids, but I love giving new life to what can sometimes seem to be a jaded scene. I wish I had the opportunity to grow up in a city like Nashville where any of these things were even an option, and it’s heartening to see young kids take advantage of that. I will support it all day long.

Can you tell me a little about where you grew up and how it differs from Nashville?

I grew up in a laughably small town called Fulton, MS. (pop 3882 as of US Census 2000). Where the biggest grocer is Walmart, and the county was dry until a recent election. The thought of people being different in any way legitimately scares people down there. It was a good place to leave. The music scene was nonexistent except for some shitty high school battle of the bands. The town over, Tupelo (birthplace of Elvis), was equally as terrible, just larger, so my friends and I started going to terrible fill-in-the-blank-core shows at a community center there. But the straightedge emo trend wasn’t particularly my bag so I fell off that. Then it was no longer a spot for shows anyway because of some immature vandalism.

Needless to say, Nashville is different in just about every way and that’s a huge reason why I decided to move/go to school here. When I hear people complain about Nashville being a boring small town, they really don’t know how bad it can truly be.

A while ago, we were talking about a “DIY” house venue that charges way too much for “intimate” house shows, pairing bands with cheese and wine and whatnot. What are your thoughts on the DIY culture and who gets to claim it? Do you feel this culture is being threatened by the influx of people seeking the “New Nashville”?

Oh boy. The DIY debate. In my opinion, there are a few wolves in sheep’s clothing in Nashville when it comes to claiming “DIY.” Some people have realized that you CAN make some cash off of giving people the sense of the underground or a sense of being “hip to it” (mind you, no one is going to be competing with Motley Crue antics or anything, but still). A few places come to mind that are in fact houses that throw shows, but again, they are either the “refined” wine and cheese borefests or people taking cuts from the door “in exchange for the risks of having a show at their house.” It’s my view that if you are so scared to have shows at your house that you are taking money out of the gas tanks of hardworking touring musicians, you might as well give it up. I have no respect for any of these people, and it is saddening that many show goers have been fooled from lack of behind-the-scenes knowledge. I wouldn’t go so far as to say the DIY scene is being threatened by newcomers, but I’ve seen a trend in wanting a very stripped down cleaned up and packaged version of something they read about once on the Internet. Sometimes they come around to what I consider to be realness, sometimes they don’t. It’s the same people who buy indie pop music. Independent by similarity of sound, pop because of manufacturing.

Posting flyers, dealing with drunk or disrespectful showgoers, hosting touring bands on floors and couches, dealing with band/money disputes, and all the details that go into show booking can be physically and mentally draining. Why do you do it?

Honestly, when the Other Basement was coming to a close I asked myself these very same questions. Many people would probably think I’m an idiot for allowing myself to be concerned with any of this, especially since I gain nothing financially. But as I got involved with the music scene in Nashville, I slowly began to take responsibility for the role I can play. Someone has to book bands for there to be a thriving scene. A lot of people I know, bless them, that also book shows are much more restricted in the genres they are willing to book, so many bands would get left in the dust even though they are amazing at what they do.

And then there is the under-representation of women and people of color that I can assist with and inspire someone like me to feel involved. The only selfish reason I can claim is that I only book bands that I want to see live, and if I have to be the one to book them, so be it.

At a Circuit Benders’ Ball panel, you talked about how Nashville’s music culture treats all-white, all-male bands as almost default. Maybe you can recount the story you told there about the punk and the P.A.

Oh yes, some dirty punk saw me standing next to our PA board and asked me, while peering around the room of white males, who was going to be running sound. I’m no guru with mixing, but turning it up loud in a basement isn’t exactly rocket science and was insulting.

Many local arts, music, and culture magazines have almost exclusively white staff and write mostly about white artists. I’m recalling a cover story in the latest edition of one of these lifestyle magazines profiling a white hip hop group. What are your thoughts on all of this?

As for the all-white representation of Nashville that gets fed to natives and newcomers alike, I find it laughable sometimes. But then in spaces where I previously felt at home having stories like the sound guy issue? . . . it’s a difficult ebb and flow to deal with, I can admit. It’s a huge bummer that I’m involved with things where participants rarely are like me, but that’s why I continue to do what I do. If I can shake someone’s perception even for a little bit, I did my duty. Granted, I would like to ask anyone who is friends or acquaintances if I am their “black friend” that they can honestly think of and how they need to reevaluate why that could be. As for the all-white staffs, all-white write-ups that constantly goes on in this town, my voice against a wall isn’t powerful, so I really wish more people would start to question why, when they look around at the new hip Nashville or underground music scene, it’s a blizzard.

Visit www.facebook.com/theotherbooking to learn more about The Other Booking. 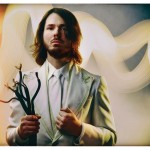