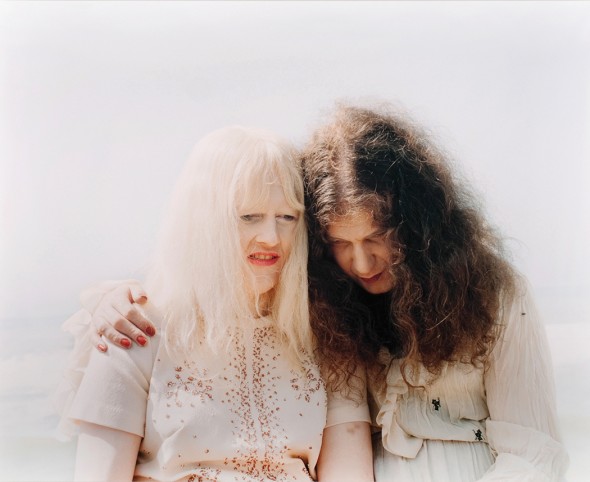 In 2009, acclaimed photographer and filmmaker Katy Grannan began what would become an ongoing exploration into the fringe communities and individuals along Highway 99 in California’s Central Valley. The stretch encompasses Bakersfield, Fresno, Modesto, and other cities similarly linked in American history to the Great Depression and the eastern Dust Bowl exodus.

Her exhibit The Ninety Nine and the Nine currently on view at Sherrick & Paul is comprised of two photographic series, which document her studies of the people and environments she observed.

The Ninety Nine color portrait series captures this notoriously desolate and unforgiving landscape through its present day inhabitants. Her subjects are framed against the stark white light of high noon and appear attentive yet devoid of sentimentality.

The black-and-white images of Grannan’s complementary Nine series step back to place her subjects in context along South 9th Street in Modesto—small, semi-itinerant camps formed at the edges of urban environments where abandoned lots and anonymous motels meet exposed riverbeds.

Katy Grannan’s work is included in the permanent collections at MoMA, the Guggenheim Museum, the San Francisco Museum of Modern Art, the Los Angeles County Museum of Art, and the Whitney. Her exhibit at Sherrick & Paul marks the first major showing of this Berkley resident’s work in Nashville and in the South at large.

The Ninety Nine and the Nine by Katy Grannan is on exhibit at Sherrick & Paul through April 25. For more information, please visit www.sherrickandpaul.com. To see more of Gannon’s work, visit www.katygrannan.com.