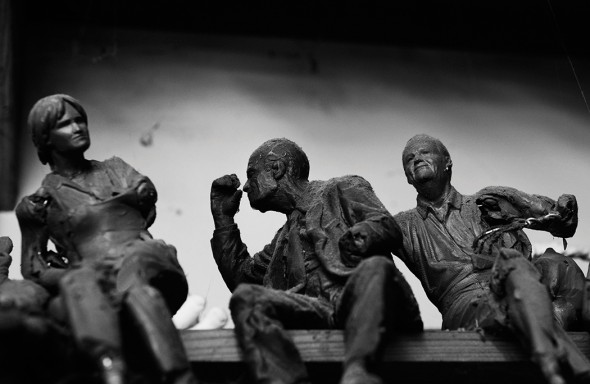 Arms arching skyward, The Entrance, a pair of eight-feet-tall bronze sentries, stands guard outside Selah Studio in Bell Buckle, Tennessee. An hour southeast of Nashville, it is a distance well worth traveling to meet sculptor Russ Faxon. His blue-gray eyes may remind you of a Siamese cat, but the artist’s handshake has the strength of a massive lion behind it. That strength is crucial to transport Russ’s expressive bronze sculptures from his imagination to the casting foundry then on to their final installations.

“I design, develop, and create limited edition and unique figurative bronze sculpture for private clients, corporations, universities, non-profits, and state governments. My works range in size from table models to monumental. The sculptures are eclectic, from fantasy to realistic, depending on the applicable need for expression of a particular concept.” 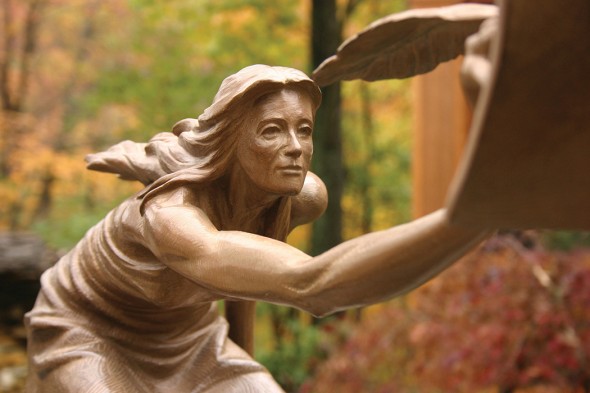 Russ mastered the art of “lost wax” bronze casting at the Mariani Foundry in Pietrasanta, Italy. Whether tender or bold, his concepts take, on average, nine months or more to complete. During that journey, Russ will assume many roles: sketch artist, concept presenter, welder, clay modeler, mold maker, assembler, metalsmith, carpenter, transportation planner, logistical engineer, project director, and people manager. He shoulders them all with an abiding passion.

“On commission work, you try to find out what people’s goals are so that you can achieve that for your client. It’s really a service industry. Unless you have such patronage that everyone just loves what you do and buys the hooey out of it,” he said with a grin. “With commission work, when someone gives an artist an idea and lets them go with it, they can really do something special.” 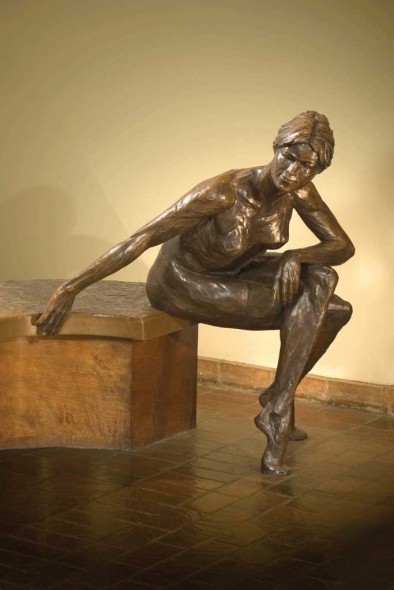 Planted in his backyard are haunting, weather-beaten armatures of earlier works that command attention. An endless array of hand tools, machines, drawings, mannequins, plaster models, and maquettes overflows his studio. You can almost see Russ’s fingerprints on every item. In between projects, the talented sculptor occasionally teaches classes in the crowded space.

“Artists are all in our own little world. I almost envy those in the music business who can share in collaboration rather than having some independent possession over what we create. We all have a need for collaboration and critiques to make our work better.” 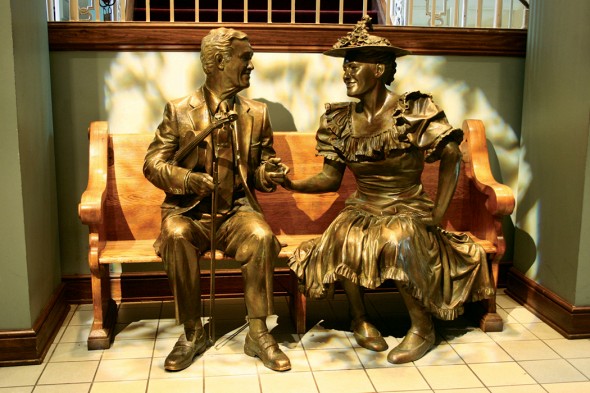 His compelling designs often include multiple figures, but before I even asked him how those pieces differ from other commissions, Russ answered that question. “I love interaction. Having a singular figure just doesn’t have the communication skills two figures do, what they are saying and doing.”

One example is a life-size piece Oh, Roy! Located in the Ryman Auditorium, it depicts the friendship between Grand Ole Opry icons Minnie Pearl and Roy Acuff. Thousands of country music fans have been photographed standing beside this duo, and, I expect, they would be just as thrilled if Russ is asked to produce a smiling Little Jimmy Dickens to join them. 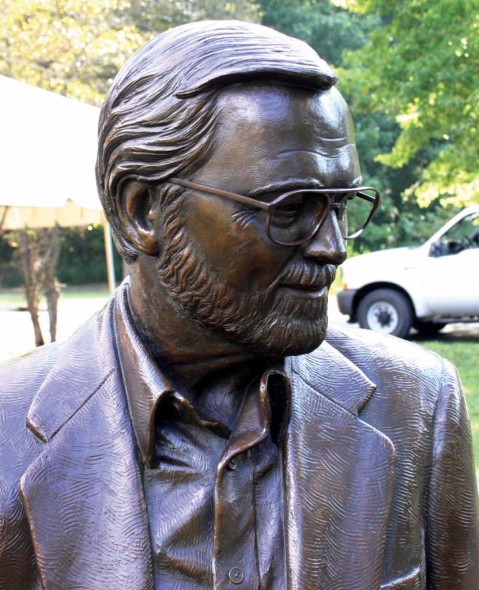 Western Kentucky University, Russ’s alma mater (B.A. in Art Education, 1973), features five of his sculptures on its campus. They include a life-size figure of Korean War casualty Sgt. 1st Class Robert Guthrie, which stands beside the Guthrie Bell Tower.

“What is it about a soldier who will go to a foreign country, not know anything about them, and fight or die for that country? They are extremely special people. The design is Robert stepping out going towards the war, an American flag in his left hand to show patriotism and the Eagle Scout badges he won as a boy peeking out of his duffle bag. He is looking back toward home, but his movement is moving forward away from home.” 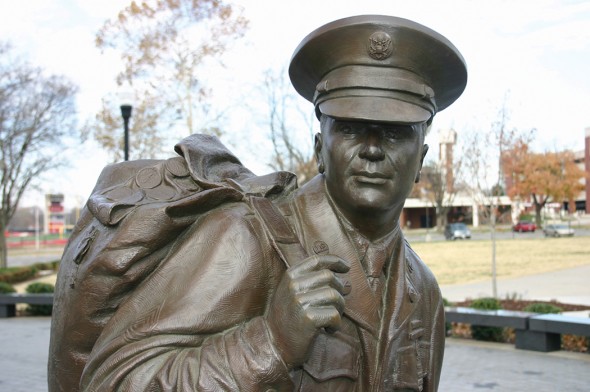 Created to honor the memory of a little girl whose death led to a law that requires youngsters to be seated on the rear seat in cars, Blowing Bubbles represents a beloved childhood pastime. You can see it in between the chapel and school of St. George’s Episcopal Church in Nashville. 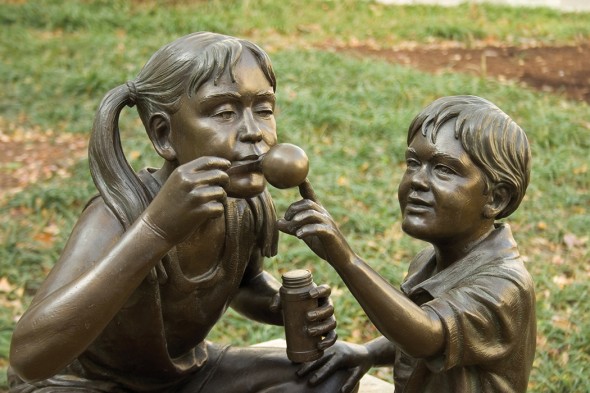 Isabelle and Calvin, two loving figures on a granite bench, graces the grounds of Alive Hospice. A sensitive work, it provides emotional respite for caregivers and family members who pass by or stop to rest or renew themselves for a few private moments. 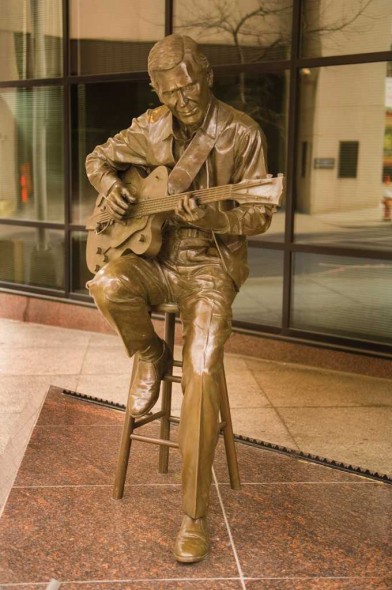 Driving home, I pictured the sculptor’s strong, long-fingered hands. They could have modeled for Auguste Rodin (1840–1917) whose sculpture still astonishes art lovers nearly a century after his death. I wouldn’t be surprised if Russ Faxon’s talent for casting moments in time is equally admired one hundred years from now. 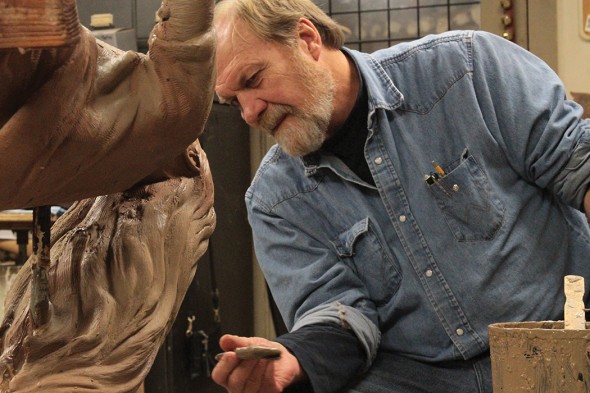 Russ Faxon at work in his studio. Photograph by Heidi Cataldo

LOST WAX PROCESS
“I use the ages old casting process known as “Lost Wax”. Each sculpture is originally made in clay. Once the clay figure is complete, a rubber mold is made around the clay figure to capture every detail of the work. The rubber mold is removed from the clay figure and used to recreate the original clay figure in wax. The wax duplicate is then “chased”, seems, lines and imperfections repaired. Wax rods or “gaits” are attached to the wax figure and are united at a central “spru cup”. A ceramic shell mold is made around the gated wax figure and placed in a burn out furnace of 1500 degrees Fahrenheit to melt out all the wax. Two thousand degree molten bronze is then poured into the ceramic shell mold to recreate every detail of the wax model. Once the bronze has cooled sufficiently, the shell mold is broken off to reveal the casting. The gaits are cut off and any defects in the casting repaired. It is then cleaned and acid patina applied to give the sculpture color. Wax is applied for protection and highlight, then mounted on an appropriate base. Each reproduction of a figure must be reproduced in wax from the original rubber mold that was made from the original clay figure. This makes each bronze reproduction unique and of itself.” 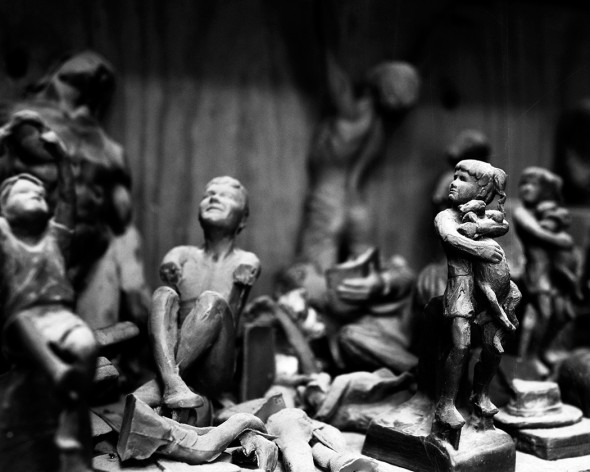