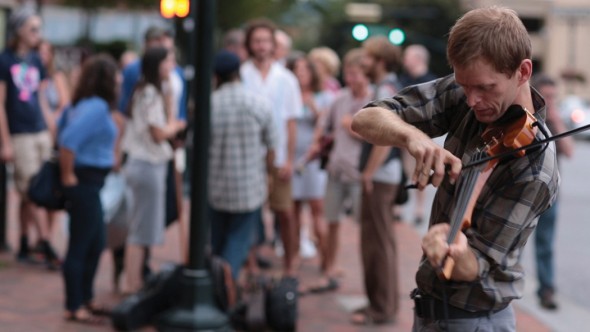 At times, the only reward for being an artist is the satisfaction of the art. But what if that’s all you needed?

Buskin’ Blues, presented by The History Boutique and directed by Erin Derham, features the musical stylings of The Resonant Rogues, The Stillwater Hobos, To All My Dear Friends, Lyric, Celestially Rooted, Big Nasty Jazz, and many other musical acts with whom viewers will want to familiarize themselves. These are the musicians that are giving Asheville, North Carolina, a reputation for street performance that’s spawned several festivals and events.

The documentary is an hour-long “slice of life” look at musicians performing on the sunshine-soaked streets of Asheville. Not quite cinéma vérité, there’s a natural feeling that connects the subjects and the audience that clicks with admirers of outdoor music. This means a trade in the expected drama for a much more pleasant, tempered tone that fits.

There are bits and pieces of really interesting knowledge here. The presented image of Asheville buskers is the antithesis of vagrancy. These are all working professionals with niches in music, playing spoons, didgeridoos, and dulcimers. These artists treat the city the same way as performers in Europe, putting beauty on the streets that wouldn’t otherwise be there. Among the artists, there’s also a very strong sentiment against regulation for the artists. These people have developed their own policing code to continue playing for people while keeping the peace by the storefronts.

It does feel like something’s missing from the story here. Perhaps it could have expounded upon the buskers’ importance to Asheville’s tourist economy. But what we have is a cool little documentary that doesn’t overstay its welcome.