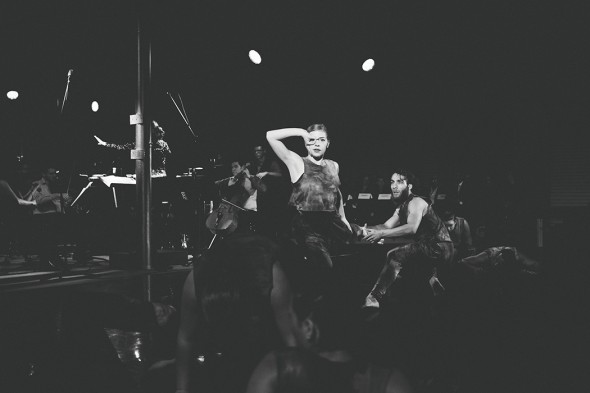 On Thursday, March 27, over three hundred people gathered in the Platform, an industrial warehouse, to experience the remarkable premiere production of Intersection, Nashville’s newest music ensemble. The concert, titled Transfiguration and led by director Kelly Corcoran, featured five works by contemporary composers and an interdisciplinary collaboration with both the Zeitgeist gallery and New Dialect, Nashville’s new, contemporary dance ensemble. The event was intimate, severe, and intellectual with a pronounced sense of urban chic—a world apart from the backbeat-driven kitsch of lower Broadway.

The interdisciplinary aspect of the concert sought an expression of how the transfiguration theme intersects in these art forms. The dances, both choreographed by Banning Bouldin, director of New Dialect, lent a moving physical manifestation to the score but maintained an ambiguity that allowed for personal interpretation. For example, in Murmuration, the choreography for Sofia Gubaidulina’s tense and contrapuntal Concordanza (1971), Bouldin sought a contrast between a starling-inspired sharp and delicate individual movement and the fluidity of group migration. However, seeing the human forms enact these instinctual, animal movements gave the choreography a primal, ritualistic feature.

On the other hand, Bouldin’s Bside (kill your darlings) was more intimate, featuring a poetic “movement vocabulary,” often in duet, that matched Ned Rorem’s tonal, neo-Romantic Eleven Studies for Eleven Players (1959). The only difficulty here was one of riches—the dance was interesting enough that it could distract from the music, itself realized by Corcoran’s players with an extraordinary virtuosity and nuance. One of the most intense and stirring moments of the concert was when Jeff Bailey (trumpet) and Curt Dallace Miller (clarinet) separated from the ensemble and climbed opposing platforms to play complementary solos. 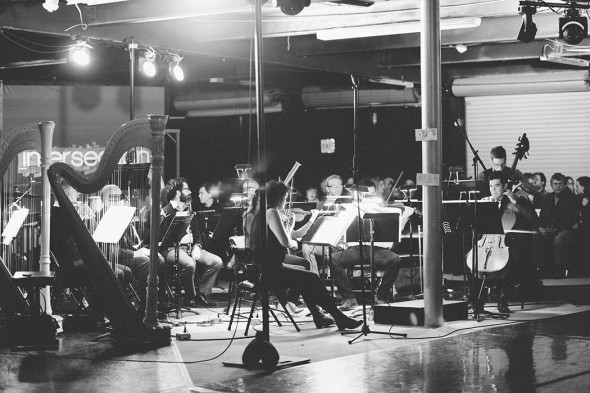 Intersection​ performing at The Porch

Zeitgeist’s two video projections, accompanying Jonathan Harvey’s Valley of Aosta (1988) and Sean Shepherd’s Metamorphoses (2004), began with projected photographs that captured moments of change and then evolved, in real time, in a process derived directly from the aural parameters of the music. In what may be a first in music history, the performance of Shepherd’s extremely concise, even Webernian, Metamorphoses was recorded live and made available on iTunes immediately after the show.

Director Corcoran’s extensive experience with contemporary music was not only apparent in her relationship with the ensemble and her interpretation of the music, but also in her programming. In particular, her decision to open the evening with the ensemble playing Arvo Pärt’s delicate Fratres alone was inspired. The work is a deceptively accessible piece featuring Pärt’s signature tintinnabuli and a timbral contrast of strings and percussion. The deception was in the ease of interpretation—Fratres requires a nuanced balance between precise articulation and musical warmth, a balance that played directly to the strengths of Corcoran and her ensemble, giving witness to her announcement in the program that “We are entering a new chapter for Music City.”

Although, as a flexible, contemporary music ensemble, Intersection may be blazing a new trail in the “music city,” there is a record of success for contemporary music ensembles in cities of similar size. Boston’s “A Far Cry” and Baltimore’s “Sonar” are just two examples. Yet, Intersection is different. With its stated interest in collaboration and dedication to presenting performances for all ages, they are not just cultivating a contemporary audience, but also an audience of the future. 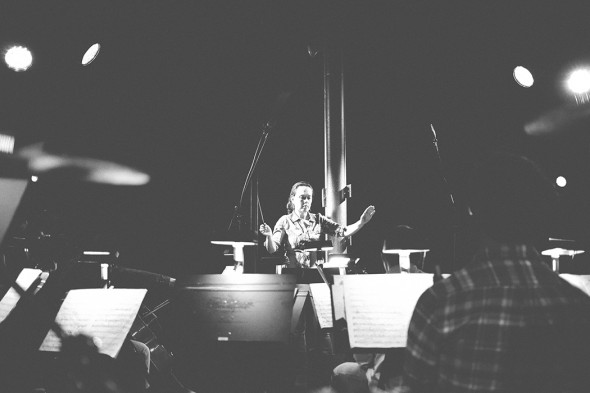 Indeed, their next concert, Pooh, Zoo, and a Dino Named Sue, to be held at Green Door Gourmet, is a family affair featuring “selections inspired by Winnie the Pooh, animals, and dinosaurs” as well as “food trucks, honey vendors, and hands-on connections with animals and dinos.” The music on the program, featuring works by Luciano Berio, Oliver Knussen, and Bruce Adolphe, are in the tradition of Britten’s Young Person’s Guide to the Orchestra, or Prokofiev’s Peter and the Wolf, seeking to cultivate the musical tastes of the young but written in the most sophisticated languages of contemporary music.

Ultimately, in a contemporary music concert it is rare that one will enjoy every piece on the program. The music is usually just too stylistically diverse to meet such an expectation. But what one can expect is a quality performance of the repertoire that will allow the listener to decide for herself. But when done well, as Intersection Cellist Michael Samis has noted, this repertoire can “transcend words to convey the stories of our time.”  With Transfiguration Corcoran has demonstrated that if transcendent contemporary music is going to be heard in Nashville, an Intersection concert is likely the place you will hear it.